Reviewing game film is never fun after a loss. And it's not meant to be. The players must relive all their mistakes of the past 60 minutes. Every misstep, every broken tackle or broken coverage, every missed block or bad throw is up on the big screen for all to see. And yet, it's all part of the process.

Pair this process with bad play-calling, though, and it becomes even worse. Players start wondering whether their efforts are in vain. Coaches see their well-laid plans go up in smoke. Distrust and disarray set in on both sides of the ball, as the athletes begin to question the leaders.

So without further ado, here are some of the plays from last weekend that will likely have Strong scowling at his key players (and coaches) in the film room over the next couple of weeks.

The good: It's 3rd-and-7. Up to that point, the Texas defense had done its job, stopping two consecutive rushing plays for minimal gain.

The bad: No pressure on Zaire whatsoever. The defensive line is content with keeping Zaire contained in the pocket, giving him all day to read the defense.

The ugly: LB Peter Jinkens' zone drop leaves him in perfect position to cover the play and stop ND short of a 1st down - but he gets confused and tries to cover the RB in he flat (Bonney's responsibility), leaving his man wide open over the middle for a 1st down.

One of the hallmarks of a good spread offense (hope you're listening, Watson) is being able to put defenders in conflict, allowing the quarterback to make easy reads and throws by keying on the movement of one player. In this case, Notre Dame goes with a four WR set, bunching three receivers on the right hashmark and running a slant-flat route combination on the left hashmark. The playcall from Vance Bedford is perfect - Malik shades to the 3-wide receiver set, while Duke Thomas and Dylan Haines pick up their assignments. Notre Dame WR Chris Brown runs a slant over the middle, while RB Tarean Folston runs a delayed route into the flat. Bonney's job is to stay with Brown off the LOS, and then break off to cover Folston once Brown enters Jinkens' zone. Jinkens' job is to be disciplined and stay put to cover his zone. But Malik Zaire does a pump fake to Folston, moving Jinkens outo of the middle of the field and leaving Brown wide open. First down, Notre Dame. 2. Malik Zaire pass complete to Amir Carlisle for 17 yds to the 50 yard line for a 1ST down

The good: Nothing in particular - the play went exactly as Notre Dame had drawn it up.

The bad: CB John Bonney is playing too soft on the outside, in fear of getting beat deep.

The ugly: Nickel CB Duke Thomas is fooled by the inside zone read and does not drop back to cover the flat in time, leaving the ND receiver wide open on the sidelines.

In the week leading up to the Notre Dame, the coaching staff at Texas made two incomprehensibly stupid depth chart changes. One of these changes was to put John Bonney - a big, physical nickel cornerback - on the outside, while sliding Duke Thomas - our best cover corner - into the nickel position. The results were predictable - Thomas is fooled by the option and can't get back to his spot in time, leaving Zaire with an easy pitch-and-catch. It should be clear to Vance Bedford at this point that Duke belongs on the outside, where he can confidenty stick with receivers, and Bonney belongs on the inside, where he can attack run plays without worrying about getting beaten deep.

(As an aside, check out Antwuan Davis' coverage - or lack thereof - at the bottom of your screen).

3. Jerrod Heard sacked by Jerry Tillery for a loss of 4 yards to the Texas 9

The good: Everybody is on the same page regarding the playcall (more on that shortly...). Also De La Torre delivers an excellent chip block.

The bad: The play-call itself is very simple, and easy to read and defend. No options for Heard, and no other routes to throw to. This is not the kind of play a spread offense runs.

The ugly: Sedrick Flowers can't get leverage on his man, while the right side of the offensive line looks completely lost.

Speaking of incomprehensible depth chart changes, shifting Perkins to right tackle and plugging in Vahe at guard may just rank up there with leaving Chris Simms in the Big 12 title game. All night long, Perkins was slow and out of position while Vahe couldn't deal with the speed of college defensive linemen in only his first start. Texas' offensive line is bad enough as it is without handicapping it to make it look worse. The staff needs to shift Perkins back to RG, put Hutchins at RT, and move on from there.

The play in question here is a one-man route -  Heard is supposed to roll out and throw to Armanti Foreman at the sidelines. It's a very simple play, and it depends on Daje Johnson running a pick route so that his defender can't slide to the flats and defend the throw. Unfortunately, Johnson makes almost no contact with his man, and Foreman is covered. Meanwhile, Connor Williams chips the defensive end before moving upfield, ostensibly allowing Flowers to block him and keep Heard clean. But Flowers is too slow to finish the play, and Johnathan Gray is too far upfield to turn back and block the end in time - giving him a free shot at Heard. On the other side of the play, Perkins and Vahe both whiff on their assignments - Vahe ignores DT Jerry Tillery and runs upfield to try and block a linebacker nowhere near the play, while Perkins can only stand in space and watch two defenders shoot by him. An ugly, ugly, play all around, and emblematic of the problems Swoopes and Heard face weekly playing behind this offensive line.

4. Jerrod Heard sacked by Jaylon Smith for a loss of 8 yards to the Texas 1

The bad: Doyle, Perkins, and Vahe all miss their assignments in painful fashion.

The ugly: Johnathan Gray is not on the same page as anyone else on the field, and ends up disrupting the play.

This play is mean to be a designed run by Heard. Everyone knows this  except for J. Gray (for whatever reason). Gray's assignment is to chip the defensive end coming from the left, while LT Connor Williams takes out a linebacker and clears the way for Heard to run. But when Gray misses his man, Heard is left in the backfield with nowhere to go.

Unfortunately, even if Gray does his job the play is dead. The right side of the offensive line devolves into complete chaos as Doyle does a belly flop and completely misses the inside linebacker. Vahe inexplicably lets the nose tackle shoot across and by him, leaving Perkins to pick up two defenders - and once again, Perkins can't pick up either. All in all, an absolutely brutal showing from the offensive line that has majorly regressed since last year - and a stinging indictment of Wickline's coaching skills and decisions.

The good: Nothing, unless you're Notre Dame.

The bad: Malik Zaire has all day to throw in the pocket, with no pressure coming from the defensive line.

The ugly: Neither Malik Jefferson nor Duke Thomas execute the Cover 2 properly, and Dylan Haines is left with no help as the Notre Dame WR walks in for an easy TD.

On this critical 3rd and 11 play, Texas went with a simple Cover 2 defense. Notre Dame lines up two WRs - the inside runs a crossing pattern, the outside runs a seam route and tries to beat the safety. Since it is 3rd and long, Malik and Duke should ignore the crossing route (which won't get ND the first down) and drop all the way back to the first-down marker in order to give Zaire as small a window as possible. Unfortunately, neither defender drops and a huge hole is left in the defense over the middle. 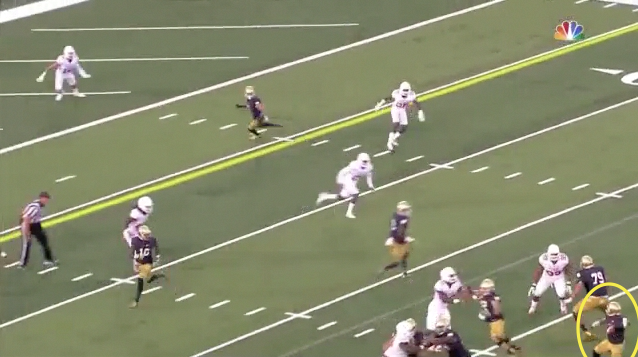 In this photo, both Malik and Duke are at the 10-yard line. They should be at the five-yard line instead - this would give Zaire the crossing routes only, and force him to check down short of the first down (thus forcing a field goal). Antwuan Davis is also out of position - outside the picture is the running back, who is left wide open in the flat for an easy touchdown. This puts tremendous pressure on the free safety Dylan Haines - he has no idea which way the wide receiver will run, and no help on either side of the ball. Meanwhile, the play becomes simple pitch-and-catch for Zaire.

Last year, Texas under Coach Strong developed a penchant for showing up to big-time games very poorly prepared. Unfortunately, last weekend was no exception - Texas was embarrassingly and inexcusably bad on both sides of the ball. Changing offensive coordinators is a step in the right direction, but Strong & Co. have their work cut out for them if they are to avoid another 6+ losses this year.

For now, on to Rice.