Texas Longhorns basketball: What to watch for in the next month

The coming weeks will have a significant impact on the constitution of next year's team.

Share All sharing options for: Texas Longhorns basketball: What to watch for in the next month

The signing of No. 4 combo guard Andrew Jones on Wednesday hardly marked the end of an important month for Texas Longhorns head coach Shaka Smart as he works to assemble his 2015-16 roster. His successes -- or failures -- over the next several weeks will set the stage for the 2016-17 season and define the team's upside. In a best-case scenario, Texas could be a contender in the Big 12 and nationally. In a worst-case scenario, Smart could struggle to find enough bigs to feature an adequate rotation.

Without a doubt, the recent addition of sophomore Tulane transfer Dylan Osetkowski was crucial for the University of Texas (or Texas University if you prefer). However, though Osetkowski will elevate teammates' game in practice next year, he must sit out a full season due to transfer eligibility rules.

So Smart made a big step in solving the team's lack of frontcourt depth, but he solved a problem of the future, not the present. While we are in a seemingly dead period of college basketball, but the next month can make or break a team's future success. May 18th is when National Letter of Intents are due for recruits, and May 25th is the withdrawal date for players who entered the NBA draft. Here are three things to watch for with the Longhorns.

If Isaiah Taylor returns for his senior season, Northern Iowa may be partly responsible. For one, Taylor may want to avoid ending his college career on a debilitating loss. However, more importantly, If Texas had made a run in the tournament, Taylor likely would've seen a huge surge in his draft stock. Instead, the upset made the opposite happen. At the beginning of the season, Taylor was projected to be a borderline first round pick, but now he finds himself absent from most draft boards. He currently sits at 66th on Jonathan Givony's Draft Express for 2016, but 40th for 2017.

Taylor will have until May 25th if he wants to pull his name out of the draft. His veteran presence in the backcourt would not only spread the floor for the guards, but also potentially take pressure off of the young front court. If Taylor could come back with an improved outside shot, he would be a nightmare for opposing teams. Texas could still thrive in hands of Kerwin Roach and Eric Davis, but the Longhorns obviously would love to have their leading scorer back. Best of luck to him whatever he decides.

2. Will Jarrett Allen come to Texas?

As one of the last remaining uncommitted five-star players, Jarrett Allen has kept his recruitment close to vest. The 6'9 center seems to be a vital piece for the 2016-2017 season, especially because as far as we know, Texas isn't strongly recruiting any other big man close to his caliber. Experts have speculated throughout the year that Allen would end up at either Houston or Texas, but recent Crystal Ball predictions have Texas' chances with Allen at 95%.

One thing that will be important to watch for is if Kentucky makes a push for Allen late. If the Wildcats land fellow five-star center Marques Bolden, then Allen will almost surely not wind up in Lexington. However, if Calipari misses out on Bolden, he may try to sway Allen from leaving the Lone Star State for the Bluegrass.

Even if Texas does land Jarrett Allen, the Longhorns would still only have three options in the front court for next season. Shaq Cleare is a solid player, but seems to be more of a role player than a frontcourt star. Incoming Freshman James Banks will be the only player over 6'9 next year, but he has a thin frame and may not be ready for heavy minutes.

With multiple scholarships available, the likely solution for Shaka would be to add a graduate transfer. LG Gill, an athletic 6'8, 220-pound forward from Duquesne could be the answer. Gill has post strength, shoots the three at 34 percent, and averaged 10.1 points and 6.5 rebounds last season. As Burnt Orange Nation noted, he has steadily improved throughout his college career and would provide valuable experience to Smart's squad. 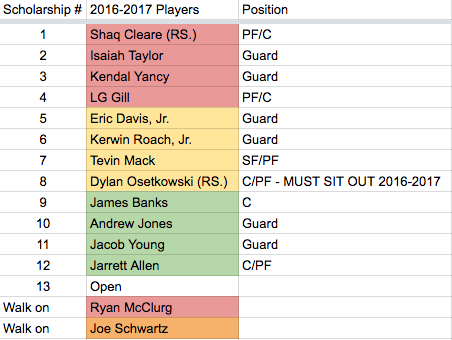 Above is the scholarship breakdown for a "dream scenario" for Texas basketball. If everything goes according to plan, Texas would have unbelievable balance both in position and class. Each class represented by the team would have four players and two pure guards.

One bizarre aspect of Texas' roster is that it likely won't include any juniors except for walk-on Joe Schwartz. Though Dylan Osetkowski would technically be a junior next year, he will have to sit out a year and would graduate in the same group as Davis, Roach, and Mack. There would be one open scholarship, but if Shaka feels like he has his team, he may save it for recruit for next year.

Next year's roster could have so much talent that one couldn't expect any sort of class balance to continue due to potential NBA attrition. Kerwin Roach has seen his name on mock drafts for 2017, and Andrew Jones and Jarrett Allen could both be early departures. It's hard to look too far into the future when we still don't know what next year's team will look like. The future of the program doesn't seem to be a linear roadmap but rather a collection of pieces potentially falling into place at the right time. Many of those pieces will come to rest before June, and Texas fans can only hope that they land in favor of the Longhorns.