After nine years of being Texas' assistant coach, Skip Johnson will now take the same position for the Longhorns' rival. Texas will now have to not only find a head coach, but also a new assistant to develop the pitchers as well.

After serving as an assistant coach at the University of Texas for nine years, Skip Johnson is leaving the Longhorns to become to pitching coach at Oklahoma, according to the Austin American Statesman's Kirk Bohls.

Texas pitching coach Skip Johnson accepted OU Pjob. He's "grateful for his time at Texas and relationships. This is like burying my dad."

Johnson will join Pete Hughes' staff in an effort to rebuild a Sooners bullpen which had a 5.18 ERA in the Big 12. The mark was 7th out of 9 Big 12 teams, and Oklahoma lost their star closer, Sheldon Neuse, to the MLB draft. The Sooners finished 30-27-1 on the year.

For Texas, the news comes amidst an arduous job search for a new head coach after Augie Garrido's reassignment. Before the past year's disaster, Skip Johnson was long speculated to be a candidate to replace Garrido as the head man of the 'Horns. However, with Mike Perrin looking to bring in an outside candidate, perhaps Johnson wanted a fresh start at another school.

In Johnson's first year at Texas, he lead the Longhorns to a 3.46 team ERA, the ninth best in the nation. Since then, here's how Johnson's pitchers have performed compared to the division 1 average.  Side note: For ERA, being in the negatives, (higher on the y-axis) is a good thing. 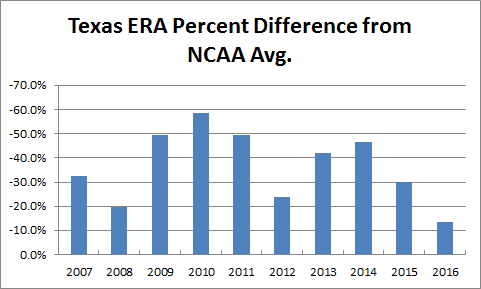 Skip Johnson was obviously a valuable asset to the 'Horns, as his pitchers always were better than average at the very least. However, 2016 was Johnson's worst year, as his young bullpen often gave up big innings, and struggled to find the strike zone. In 2016, his club had a 4.82 ERA in conference play, and averaged 7.51 walks per game.

The timing of Johnson's decision to leave is interesting, but it's unknown how long he was looking to leave the Texas program. Augie Garrido hired Johnson from Navarro College in Corsicana, Texas in 2007.

Needless to say, Mike Perrin has his work cut out for him.