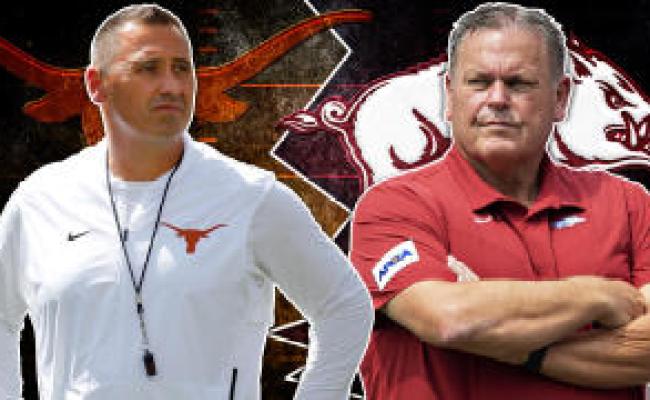 Ah, the smell of the old SWC! I love it. Arkansas and Texas and the little pig who cried wee wee wee all the way home still believes this match up is some kind of massive rivalry. It's not any more BTW, but that doesn't stop the people of Arkansas struggling with some strange big brother complex regarding their bigger, better, neighbor!

What it all means is that Texas better be ready to bring their A game. TBH, Texas gets treated as every opponents biggest rivalry game, so it's like we're playing a championship match week in and week out. Hopefully, the bigger guys in the SEC are big enough they won't care we're Texas and will start treating us like a regular weekly game and not a leave-it-all-on-the-field season ender. But who knows.

What I do know is, Texas has a shot if they show up ready to play. Arkansas struggled to beat Rice well into the 4th quarter and Texas showed up last week against a fairly good Sun Belt opponent in Louisiana. Originally, I was leaning toward this game being a 50/50 game because Arkansas is an SEC team and they've got the crazy home field advantage. But after last week, I think momentum has shifted in Texas' favor just a bit.

What I really liked last week:

I was excited to see 3 major shifts from previous years. First, the offense was schemed with the goal of keeping momentum going and getting the ball in the hands of our best players. Right now that's Robinson and Whittington. Granted, we need more guys to step up and make plays, but the initial move to scheme for our best players and not take them out when 3rd and long is on the line, was refreshing to see.

Secondly, I really liked how our defense tackled, especially in the open field. While there is room to grow here and it wasn't perfect, it seems the Texas coaches are really pushing fundamentals in practice, and I love it.

Finally, I thought Card played a fairly clean game. No major mistakes, tons of upside and an overall good first outing for a redshirt freshman starter. I thought Card was poised and made some really good throws. Currently, he is #16 on the FBS quarterback rating chart. Not bad for a freshman debut.

What needs work on Offense:

Obviously, teams learning new schemes and coaching concepts are works in progress and Texas is no exception. What I hope to see improve over the next few games is stronger O line play. It seemed at times that Card was scrambling more than we would want him to, not to mention they allowed 3 sacks on the day. It's baptism by fire when a young quarterback is having to learn the game on the run. While it seems Card is up for the task, I'm not a fan of having him do it. Additionally, while the run game was more than acceptable, I really do believe Robinson is capable of so much more and just didn't get the looks he needed to really break free and run. Better O Line play will help both of these issues.

Secondly, I'm looking for Texas to add a few more play makers to the list. While Sark is known for focusing on his best players on offense, we really need more than 2 of them. Otherwise, teams will eventually figure out how to double Robinson and Whittington and stop us short. Texas needs receivers like Worthy, More and tight end Jared Wiley or Cade Brewer to step up and start making more plays.

Finally, Texas played a lot of third down and long last Saturday. The good news was, Texas converted third and long a number of times, and a fourth down or two as well. But Texas won't be successful over time if we continue to live in third and long.

What needs work on Defense:

On defense my list is a little bit shorter. And it should be considering we have a veteran squad and they met their goal of holding a team to twenty points or less and tackled better then we've seen in a long time. First, I hope to see the defensive line create more problems for the offensive line and quarterback. I understand that Sark has indicated the defensive line is playing a particular brand of football that is designed to eat up blocks and allow our linebackers make plays. And that's fine. But I feel that the linebackers will get more explosive stops coming their way if the defensive line can begin creating the kind of pressure we all believe they're capable of. After all, they are supposed to be one of the better position groups on the team. If they don't live up to their potential, I guess the question is, where does the rest of the team fall below that?

Finally, we just need to be finding ways to force turnovers. But that's all teams right?

Over all, I thought we were ok on special teams other than penalties. We had another potential return for a touchdown and the punting seemed acceptable. In fact, the immediate tackle on the first punt at the point of the catch was a fantastic example of Texas players being coached on fundamentals. You can actually see the player slow up and time the hit perfectly. Dicker is about as accurate as he always is and it seems like players were flying to the ball. "Keep going" is all I have to say about that.

Texas wins if they can stop the run and force Arkansas quarterback KJ Jefferson to make plays. His passing percentage isn't great. Jefferson is really more of a running threat then that of a passer. Texas also wins if they figure out how to get the ball down field. With the exception of their top safety, the Arkansas corners are suspect and should be easy prey for Hudson Card if he's on his game. Look for Texas to play the outside of the field when throwing deep and to use Robinson and Whittington in the slot behind the backers and in front of the safeties.

Texas will lose if they don't play their A game. There is no question Texas has more talent. If they show up, we've got a good shot. But if Texas is off or takes a step back, especially in run defense, it could be a long game.

In my pre season predictions I said this was a 50/50 game and thought it might be one of Texas' 4 losses if they end up on their floor at 8-4. However, Texas' ceiling is also still 10-2 and after last week, Texas could be headed in that direction. I like Texas to win this one by 7. I'll take the good guys 31-24. The Texas D won't hit their goal of 20 or under, but will be awfully close. Bijan will rush for 150 and probably hit 200 in total yards. And I expect Card to struggle at times but show us glimpses of why he was picked as QB1.