What does this season hold for Jaylen Bond?

Here is the thing, anyone who follows this team at all knows that Jaylen Bond is a terrific rebounder. But what about the rest of his game? What do we know about that?

Of the five returning players in Texas' sizable sophomore class, Jaylen Bond played the fewest minutes last season. Aside from the rebounding, there is a lot to like about Bond's game. First off, he is really athletic. Just to remind everyone how athletic he is, I want to highlight this play. Click on that link and watch the video -- you won't be disappointed. Well, you might be disappointed by the quality of the video (sorry), but not by what Bond does in it. It is a great play that shows Bond do a several impressive things. First, he swarms an offensive player and takes the ball away. Bond is pretty good at stealing the ball from opponents, particularly for a big guy. He stole the ball in an estimated 2.3 percent of his defensive possessions while he was on the floor. This is a similar steal rate to Julien Lewis (2.3 percent), Sheldon McClellan (2.4 percent), and Myck Kabongo (2.5 percent). When a big guy who mostly guards players away from the action is stealing the ball almost as frequently as the point guard, he is probably doing something right. 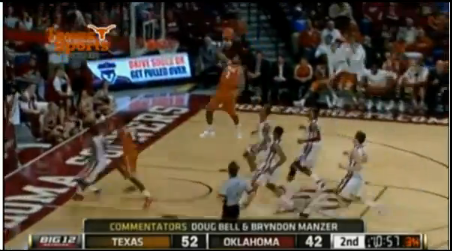 There aren't many guys who can make a play like that. Jaylen Bond was channeling the spirit of Kris Clack. Yes, it is possible to channel the spirits of the living. It is an advanced technique, but it is possible.

There is another point to be made from that photograph. It takes us back to the rebounding. Bond is good at positioning himself for rebounds. He also hustles and pursues the ball. But it helps that he can levitate. The combination of hustle and athletic ability is quite potent. Again, Kris Clack comes to mind, as does another hustling, athletically gifted former Texas forward -- Chris Owens. The thing is, Bond is already a better rebounder than either of these guys.

Anyway, I was trying to talk about things other than rebounding. Let's take a look at Bond on offense. 75 percent of Bond's shot attempts were taken at the rim last season. About 40 percent of these shots were assisted. Like Jonathan Holmes, Bond creates opportunities to score at the rim by rebounding. (Crap, again with the rebounding; I just can't help myself.) Bond wasn't quite as effective as Holmes at scoring around the rim, as Bond converted only 57 percent of his attempts from in close. This is a low shooting percentage at the rim for a big man, particularly a big man who can go to the rim with as much authority as the guy in that video I linked above.

Bond's low rate of converting shots near the rim is almost certain not to continue. First off, no number that I have looked at related to Texas' season last year screams "fluke" quite as loud as Bond's field goal percentage at the rim. Second, more than any other Texas player, Bond is likely to benefit from spending an off season with Todd Wright in what is among the best strength and conditioning programs in college basketball. Bond's style of play will mix well with an extra 20 pounds, and when he gets them no one is going to want any part of it whatsoever. Picture the build of Alexis Wangmene coupled with the athleticism and relentlessness of Bond -- I don't know if we will see that guy yet this season, but we will see him on the 40 acres eventually.

Any basketball skill that requires jumping, running, or chasing after things Bond does well. With the ones that involve shooting, he is not as good. Jaylen Bond was 11-30 from the free throw line last season, and made 35 percent of his two point jump shots. Actually, 35 percent isn't a terrible jump shot percentage, but Bond did not exactly threaten the defense with his shot last season in the way that Holmes did.

The free throw shooting worries me. The jump shooting doesn't bother me as much. Physical and athletic big men can do just fine in the college game without a jump shot. To be honest, the fewer guys attempting two point jump shots on the team, the better. Only a few players in the world make two point jump shots frequently enough to make them worth the trouble. And there are almost no players without weaknesses. If your weakness is that you are slightly worse at something that everyone is bad at, it isn't a major problem.

Jaylen Bond is an important part of a well-balanced basketball team. Jaylen Bond rebounds and creates some offense with second chance shots. He is a nice finisher in the open floor, too. No one really knows if Bond can become more than this. But even if he does not, Bond still provides a lot of value for Texas.