This week's inside the numbers looks at Texas' loss to UCLA and the shooting struggles of of Javan Felix and Jonathan Holmes.

Share All sharing options for: Texas Longhorns Basketball: Inside the Numbers, Week 5

We have reached the calm before the storm of the college basketball season. With most universities entering the final exam period, there aren't many games for the next week or so.

Basketball final exams do not happen until the second semester. The games in January, February, and March matter much more than they do now. That is not to say these games are not important -- they are -- but success in 2013 will make everyone forget about failures in 2012.

Right now, the Texas fan base is upset. This is pretty clear to anyone reading the comments at this blog. It is also not surprising, as Texas has suffered two difficult losses in the last two games.

Right now is probably not the best time to make forward looking projections based on the performance of the Texas Longhorns so far this year. This team will likely look better in a month or two. And for those already counting out a trip to the NCAA tournament, you are getting way ahead of yourselves. I cannot predict the future, but the book on this team is not yet written. Based on past history, the top five or six teams in the Big 12 should make the tournament. Texas still has a real chance to be one of these teams. To date, Oklahoma and West Virginia do not look like world beaters, Iowa State only has one win over the Pomeroy top 100, and Baylor has been shockingly inconsistent -- beating Kentucky in Lexington and losing to the College of Charleston and Northwestern in Waco. Texas has about as high of an expectation of improvement over the next month as anyone. Simply getting Myck Kabongo back will be a huge improvement, as will modest and likely improvements in turnover rate.

UCLA's small advantage in true shooting percentage was enough to overcome Texas' even more modest advantage in the number of shots attempted (where "shots" refers to the composite number FGA + 0.475xFTA). After being down by eight points, UCLA came back, and then did just enough to hang on and win the game; had Texas found a way to come back and win, accounts of the game might have focused on UCLA's two missed free throws in the final minute.

This game was decided by the true shooting percentage differential. Baskets were hard to come by for both teams. Cameron Ridley led the way for Texas with 5.0 Points Above Median (PAM). Four of Ridley's six shots were assisted attempts at the rim, and Ridley made all four of these shots. Ridley was also 1-2 on two point jump shots, with the one shot that he made also coming on an assist. Finally, Ridley was 4-7 from the free throw line. Jonathan Holmes was the only other Longhorn with a PAM greater than zero; his total was 1.2. Felix struggled with his shot, registering a PAM of -4.2. For the Bruins, Jordan Adams (PAM=2.7) and Kyle Anderson (PAM=1.9) were the most efficient at scoring the ball.

One place where the Longhorns left some points on the floor was at the rim. Texas was 8-16 on shots at the rim. Two of Texas' misses were shots that were blocked by the Bruins, meaning that Texas went 8-14 on unblocked shots at the rim. Two of these misses were wide open layups. The Longhorns also went 4-20 from three point range, and only took 20 free throws (making 13). The remaining 26 shots that Texas attempted (42% of their field goal attempts) are listed in the play by play log as two point jump shots. Texas was 11-26 on these shots (42% shooting), which is a pretty good shooting percentage on mid-range attempts. Taking so many shots from mid-range is not ideal. Shooting too often from mid-range is one of the things that is holding back the Texas offense this season.

The Texas defense still played very well in this game. Over half of UCLA's attempts were two point jump shots, and UCLA only connected on 31 percent of these attempts. The Longhorns didn't put up gaudy shot blocking totals in this game (although Prince Ibeh did get three blocks in six minutes), in part because the Bruins hardly went to the basket in half court. UCLA was great in transition. 29 percent of UCLA's initial shot attempts came fast breaking off of a rebound, and their effective field goal percentage on these shots was 68 percent. But outside of these transition shots, UCLA mostly took mid-range jumpers. Texas' loss to Chaminade remains the only game this season where Texas has allowed an opponent to score more than one point per possession.

Looking at the Longhorns' shooting troubles through the first nine games

A number of measurable factors go into creating a good offense. I broadly group these factors into two categories. The first category consists of things that affect the number of shots a team gets, such as turnovers and offensive rebounds. The second category consists of things that affect how much value a team gets from its shot attempts, and includes various shooting percentages and shot distributions.

For almost a year, I have been running a website that compiles shot distribution statistics for NCAA D-I basketball. Looking at the Texas page helps to understand more about the Longhorns' shooting struggles this season.

Javan Felix. Before I spend time writing about him, I want to preface this discussion by saying that it is not my intent to beat up on Javan Felix. (That is a funny choice of words, as Felix is rock-solid and would surely triumph in any physical altercation between the two of us. I wouldn't want any part of that.) I actually rather like Felix, in that I see him being a very important part of future Texas teams. Felix has played a huge number of minutes so far this year. He plays hard. He has a great handle. He seems really tough and resilient. It is just that he has been forced by circumstance to do much more than he should be doing at this point in his career.

Felix's low true shooting percentage reflects his limits as a scorer. As I have written many times in the past, efficient offense only comes from three spots on the floor: at the rim, from three point range, and at the free throw line. The huge expanse of court between the rim and the three point line is the no fly zone for shooters -- you only want to go there when the clock forces you. On the year, 63% of Felix's shots have been two point jump shots -- taken in the no fly zone. Only 46 D-I players with more than 40 shot attempts have taken a higher proportion of their attempts as two point jump shots.

Some of these two point jump shots are actually the mid-range floaters that Felix often takes on drives to the basket. These shots probably aren't as bad as pull up jump shots, as they are more likely to produce offensive rebounds when missed, but they still aren't particularly likely to go in. Felix's size (he is 5-10) forces him to take shots like these fairly frequently on drives to the basket. Felix has only made 40 percent of his shots at the rim, which accounts for 17 percent of his field goal attempts. These shots, often highly contested, are just much harder for someone Felix's size. Felix also doesn't get to the free throw line very often.

One of the biggest differences between Felix and Myck Kabongo is in the ability of the two players to create shooting opportunities at the rim. During his freshman season, Myck Kabongo managed a true shooting percentage of 0.518. Kabongo's strengths as a freshman were getting to the rim and getting to the free throw line. If three fourths of Felix's attempts were instead taken by Kabongo, Texas would likely have wins against USC and UCLA. 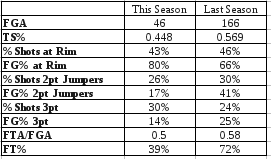