The Last Three Minutes: A Look Back at Texas vs. UCLA

Share All sharing options for: The Last Three Minutes: A Look Back at Texas vs. UCLA

With 3:02 left in the game at Reliant Stadium, Sheldon McClellan walked to the line and calmly knocked down two free throws, to put Texas ahead of UCLA by a score of 61-53. The dozens of Longhorn fans in attendance at the game breathed a sigh of relief. Texas now had to protect this lead.

The Longhorns had struggled shooting the ball for much of the game, but had defended well and had avoided turnovers. With an eight point lead, Texas simply had to play solid basketball the rest of the way. It didn't happen. The failure to take care of business down the stretch cost the Longhorns a win against a very talented basketball team.

So what exactly happened? Let's take a look possession by possession to see. In the final three minutes of the Texas UCLA game, each team had seven possessions. Looking at each one tells the story of the UCLA comeback.

UCLA possessions #1: Larry Drew used a ball screen to beat the Texas defense, making an easy layup. This was a 10 second possession that can only be described as a defensive breakdown. Texas typically defends ball screens well, but there was no help from the man defending the screener, and the help at the rim was late.

Texas possession #1: Texas worked clock, and then with roughly 11 seconds on the shot clock, Julien Lewis drove the basket and missed an eight foot runner. It was a difficult shot, but Texas was at least able to bleed some time off of the game clock before taking it.

UCLA possession #2: The Bruins attacked in transition. Below is a snap shot taken after the Bruins recovered Lewis' miss. The ball is being passed to Larry Drew, as UCLA looked to push the ball in transition. Only Javan Felix (off the screen) was back on defense for Texas. Fortunately for the Longhorns, Drew tried to throw a long pass down the floor, rather than pressing his two on one advantage. Drew was guilty of trying to make a play that wasn't there. Drew overthrew the difficult pass, and the Bruins turned it over.

Texas possession #2: Texas broke the UCLA press, and looked to run a ball screen. Kyle Anderson, defending the ball screener, trapped Javan Felix and stole the ball. Anderson's trap is shown in the image below. 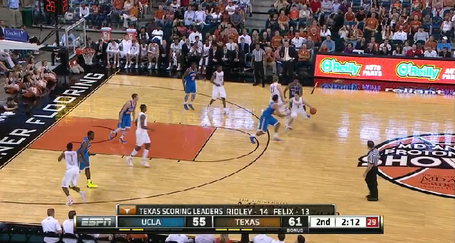 UCLA possession #3: With the steal, the Bruins attacked in transition. Travis Wear missed a jump shot, but captured the long rebound on a favorable bounce and found Jordan Adams under the basket for a layup. Adams was fouled, and hit the free throw to complete the three point play.

Texas possession #3: Texas broke the UCLA press, and set up its offense. With 1:35 left in the game, Sheldon McClellan drove the basket and reached the rim. His shot was blocked by Kyle Anderson.

UCLA possession #4: The Bruins again looked to attack in transition, but this time the Longhorns had three defenders back, and they cut off the UCLA path to the basket. UCLA set up in half-court. Larry Drew missed a three point shot, but Jordan Adams beat Julien Lewis to get an offensive rebound. He put it back up, made the shot, and was fouled. Adams again made his free throw to complete the three point play.

There was now 1:15 remaining, and the score was tied 61-61. Two three point plays and a Larry Drew layup -- all shots at the rim -- accounted for three of the four UCLA possessions during this stretch. UCLA also turned the ball over in transition. Texas' three possessions consisted of a missed runner by Lewis (a low percentage shot), a turnover by Felix, and a shot of McClellan's that was blocked at the rim.

Texas possession #4: After a timeout, UCLA set up a full court press. Texas passed the ball inbounds, and the ball was trapped. Texas called a timeout with 1:11 to reset the press break. Texas substituted Ioannis Papapetrou into the game to have an extra ball handler to beat the UCLA pressure defense. Texas beat the press and then set up in half court.

Javan Felix had been beating Larry Drew like a drum all afternoon. In this possession, Felix again blew by Drew. The image below shows the moment before Felix turned the ball over. An important thing to notice in this image is that although he has beaten his man, Felix didn't really have any good scoring options. Kyle Anderson had come off of Connor Lammert to stop Felix's penetration, but this didn't leave Lammert open. 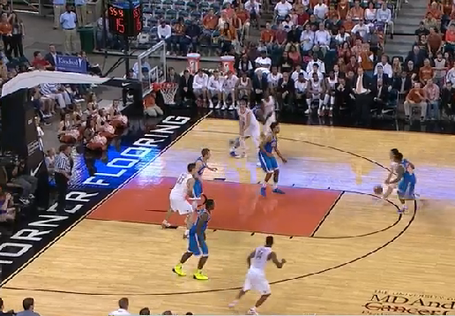 The image below shows the moment when the turnover occured. Lammert was behind Anderson, when he probably would have been better off rolling a bit wider, further from the basket, to create a passing lane. Still, he wouldn't have been open then either, as McClellan's defender was also collapsing to close things off. Felix was guilty of trying to make a play that wasn't there, rather than simply passing the ball out to McClellan. Anderson ended up with a steal. 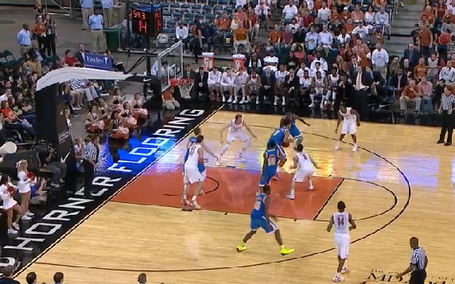 UCLA possession #5: After the steal, the Bruins were off to the races, again attacking in transition. The Texas defense recovered, preventing a quick attack on the rim. While UCLA didn't have a numbers advantage, they were attacking a defense that was not yet set. The ball was reversed to Shabazz Muhammad, who put the ball on the deck and drew a foul. He made one of two free throws.

Texas possession #5: After Muhammed's missed free throw, Texas brought the ball up the court and ran a set play. With nothing happening, Felix again went to work on Drew. But this time, Drew played solid defense, and with 31 seconds remaining in the game Felix forced a poor and highly contested shot from fifteen feet. Anderson was again there, contesting the shot. There was absolutely no reason to take this shot. Texas still had 21 seconds of shot clock remaining, and only down by one point was not yet at the point in the game to take desperation attempts. 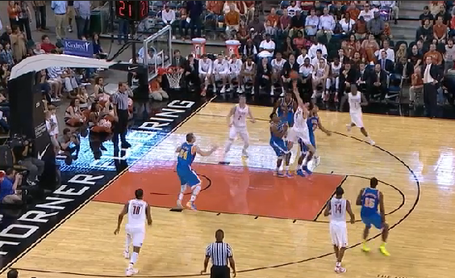 UCLA possession #6: The next possession really started as Felix's shot was going up. With Felix attacking the defense, neither Lewis or McClellan were rotating back to defend the back court. The image below shows how things looked as UCLA secures the rebound. All five Longhorns were within 17 feet of the basket, and no one was remotely close to Kyle Anderson, who received the outlet pass and scored an easy layup. 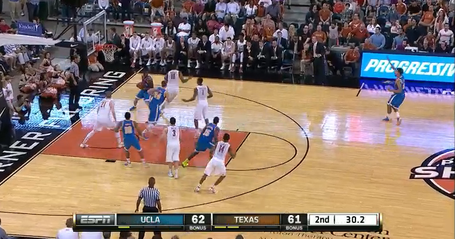 Texas possession #6: The Longhorns called a time out to set up their play. After inbounding the ball, Lewis was handling the ball up top. The play was to set a staggered screen for Sheldon McClellan, who I have indicated with the yellow arrow in the image below. Both Holmes and Lammert were to screen for him. 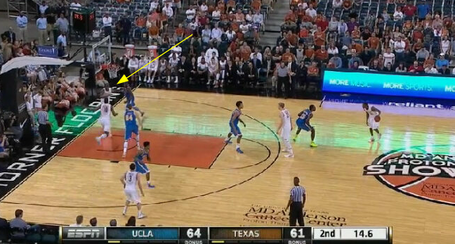 UCLA stoped this play by bringing an extra defender from the weak side of the floor to double McClellan. Everyone in the gym knew the ball was coming to McClellan, and Larry Drew, who was guarding Javan Felix, peeled off and doubled McClellan as he was coming off Lammert's screen. This is shown in the image below, where Drew is indicated with a yellow arrow. 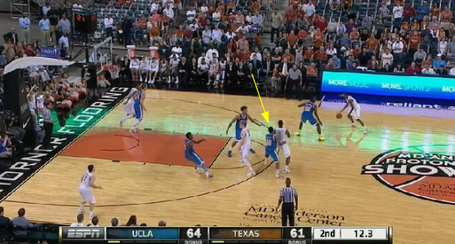 Fortunately for the Horns, Jonathan Holmes ended up saving the possession by making a strong one-on-one move, and hitting a difficult shot.

UCLA possession #7: With only 6 seconds remaining, and still down 64-63, Texas was forced to foul. Texas put Jordan Adams at the free throw line. Adams is an outstanding shooter, but he missed his second shot. Jonathan Holmes grabbed the rebound.

Texas possession #7: With no timeouts, Texas did not have the option of resetting in the huddle. With little time remaining, Texas needed to bring the ball up the floor in a hurry. After pulling down the ball, Holmes should have gotten the ball to Felix for a quick push up the court. This didn't happen, with Holmes instead dribbling up the floor and launching a desperation heave. The image below highlights both Holmes (yellow arrow) and Felix (teal arrow) after the missed free throw. Felix was lost in the defense, instead of coming to the ball, and Holmes didn't find him. 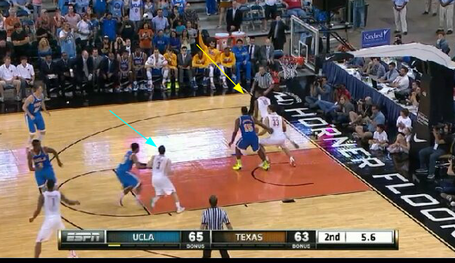 Instead, Texas ended up doing this.

1. This was not Felix's best basketball. Down the stretch against the Bruins, Felix forced a poor shot, tried to force plays that weren't there, and turned the ball over when doubled off of a ball screen.

2. While he only scored two points in the final three minutes, UCLA has Kyle Anderson to thank for this win. He made a play on the defensive end for the Bruins on virtually every Texas possession down the stretch, almost single-handedly shutting down the Longhorns. He was, quite simply, the best player on the floor.

3. UCLA almost blew this game after coming back, missing two of four free throws in the final minute.

5. This UCLA team is baffling. They are very talented, but haven't yet figured things out. By all rights, they probably should have wiped the floor with Texas.