The Longhorns basketball team is struggling on the offensive end of the floor as it never has before during Rick Barnes' 15-year tenure in Austin.

In late December of 1998, Rick Barnes' first season at Texas, Princeton knocked off the Longhorns 56-46 in the second round of the Rainbow Classic to drop UT's season record to 3-8. With just seven scholarship players on the roster, expectations were low for that 1998-99 team to begin with, but after falling five games under .500 with the ugly loss to Princeton, UT fans had all but given up on a good season when Barnes' Longhorns ripped off six consecutive wins -- the latter five coming in Big 12 play -- elevating Texas' record to 9-8 overall, 5-0 in conference.

Led by senior slasher Kris Clack on offense and the dominant interior defense of sophomore center Chris Mihm, Texas also enjoyed unexpected boosts from a breakout junior campaign from Gabe Muonecke and the most unlikely of point guard heroes in the high flying Ivan Wagner, finishing the season 18-11 overall and 13-3 in the Big 12 to win an improbable conference championship.

On January 13th, 1999, those Longhorns won their fifth straight by defeating Baylor to improve to 8-8 on the season, after which the Longhorns would not fall below .500 the rest of the season. Nor have they at any point since, a remarkable run spanning 5,482 days and 13-plus seasons, each of which has ended in an NCAA Tournament berth for Texas and Rick Barnes. This is the point where I'm supposed to anchor the moment in time by placing it in cultural context, so here you go: the last time Texas was under .500, Brittney Spears had just released her debut album, the Euro had just debuted as a currency, and Manti Te'o was two weeks shy of his second birthday. (WTF?)

But this past Saturday, exactly 15 years to the day after the '98-'99 team beat Baylor to get to 8-8, Barnes' young Longhorns fell to Iowa State and their season record fell to... 8-8. The Prophecy is fulfilled.

The streak remains alive for now, but it appears to be on life support because next up on the schedule? Kansas. If this Texas team manages a win over the Jayhawks on Saturday to avoid falling below .500, it will be no less shocking to fans than the '98-'99 team's dramatic turnaround 15 years ago.

As successful as Texas has been the past 14 years, it's understandable that as fans we have grown to take quality seasons for granted. After all, we literally have no experience with anything other than a quality season from Texas under Barnes.

Last Sunday after the loss to Iowa State, I got to wondering what this team's offensive profile looked like as compared to other Barnes teams. I won't belabor the analysis here, in part because Jeff already hit on it in this week's Inside The Numbers but mostly because it's as simple as he makes it out to be:

No sophisticated analysis is required to understand what is wrong with this team. They simply cannot put the ball in the hole. The Texas offense was pretty good last season. The problem is that the five best offensive players on last year's squad were J'Covan Brown, Myck Kabongo, Sheldon McClellan, Clint Chapman, and Jonathan Holmes. Brown and Chapman are gone, Kabongo will not play until February, Holmes got off to a slow start -- although he has picked things up lately -- and McClellan is really struggling.

That's pretty much it, and if watching the team didn't make crystal clear just how badly this group is struggling on offense, seeing the numbers next to the past 10 Texas offenses surely will.

CJ Moore wrote an excellent piece at Basketball Prospectus laying out the facts that underscore why the Rick Barnes bashing is way out of whack with the performance record (read the whole thing), and he probably understated the success Barnes has had on offense, which by the numbers has slightly outperformed the defense, for which he is known.

The chart below lays out the offensive performance numbers for the 2013 Texas offense, along with the same numbers for each Texas offense between 2003-12. (Ken Pomeroy's data set ends with the 2002-03 season.) The cells shaded in red indicate the lowest mark in a given category among the 2003-12 offenses. For example, the lowest Adjusted Offensive Efficiency rating between 2003-12 was the 2009 team, with a 112.4 Adj. Efficiency rating, which rated as the 39th best in the country. This year's offense? Has a 94.6 Adj. Offensive Efficiency rating, which ranks 253rd in the country. No, that is not a typo: after 10 straight seasons of having an offense that rated among the Top 40 nationally, including four offenses that rated in the Top 5 in the country, this year's group can't crack the Top 250. Like the Manti Te'o story: WTF? 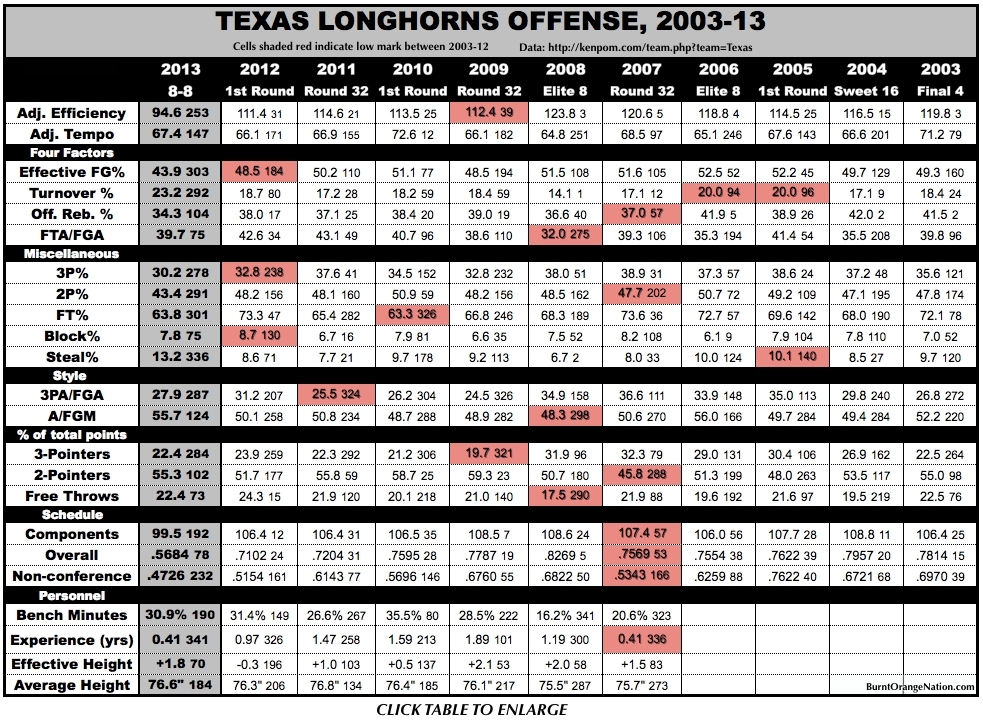 These numbers speak for themselves, but putting together this chart was revealing in a number of interesting ways and I do want to throw three quick thoughts into the mix for discussion.

First, the chart is illuminating in showing the metrics which seem to matter to Texas, and those that don't. For example, Texas has been a very good to outstanding offensive rebounding team in each of the previous 10 seasons. This year's group is only average, at 34%, 104th nationally. Likewise, Barnes' teams the past decade have all been good to great in the turnover department, never turning it over more than 20% and often limiting turnovers to 17-18% of possessions, which is excellent. I don't need to tell you that this year's group has been absolutely dreadful taking care of the rock, coughing it up on more than 23% of possessions, 292nd nationally.

Looking at things holistically, those two components -- turnovers and offensive rebounding -- are as essential to Texas' offensive success under Barnes as anything else; the team's performance across other metrics has largely varied pretty widely or remained averaged, but limiting turnovers and grabbing offensive boards have been a constant. Until this year.

Second, I was struck by Texas' low assist rate, which is fairly constant across the previous 10 seasons, right in the 48-52% range. One of the things that statistic may highlight is the success Barnes has had with putting players who can make plays for themselves in a position to succeed. As I wrote in the preseason and Jeff noted again in this week's ITN, Texas needed McClellan to step up and take his turn as Texas' alpha scorer and he simply hasn't been up to the task. Hard not to wonder whether Kabongo was ready to play that role for us this year. (Good thing we'll find out with just 8 games left to play! Sigh...)

Third and finally, the youth on this team is undeniable, but of the two, Barnes' previous success with young teams suggests it's the lack of an offensive creator that's really killing this team. Texas has been one of the very youngest teams in college basketball in five of the last seven seasons, with the most veteran of those teams still rating outside the Top 100 in terms of experience.

All told, there's not much mystery about what ails this team right now, and frankly, the story is playing out according to the pre-season script: if Kabongo's absence extends well into the season, the team needs Sheldon McClellan to make the leap forward or it's going to have trouble scoring.

We just didn't know how right we were. Which is why on Saturday afternoon in Austin, the Texas Longhorns basketball team may find itself under .500 for the first time in 14 years.