After closing out Rice to finish the non-conference season 8-5, the Longhorns are starting to play better basketball but now must find a way to score points across the brutal 18-game grind of Big 12 play.

Just before the football team closed out its season in San Antonio on Saturday evening, the Longhorns basketball team wrapped up its non-conference season with a 57-41 win over the Rice Owls to improve to 8-5 on the year heading into Big 12 play. Fitting with a season trend we'll talk about more in a bit, Texas did not shoot the ball well on Saturday, finishing the game 18 of 49 from the field (37%), but won the game thanks to yet another smothering defensive performance that limited Rice to an even worse 15 of 47 shooting (32%), and a dominant advantage at the free throw line where Texas (18 of 29) earned 23 more attempts on the game than did the Owls (4-6).

In this edition of the TBR, we'll take a look at where the team sits following completion of the non-conference schedule, look at the impact Myck Kabongo and Jaylen Bond's absences have had on the team, and dig in a little deeper into the team's defensive numbers and what they mean going forward.

Note: helpful background on the advanced statistics used throughout this post here and here.

The Longhorns' season opener against Fresno State pretty neatly captured the non-conference season as a whole: a ridiculously young team shot the ball terribly and turned the ball over too much, but played exceptional defense and held just enough of an edge in the rebounding and free throw departments to secure a narrow win. That would do fine as a summary of the Horns' non-conference season as a whole, but the story line between the opener and Saturday's win over Rice is important to evaluating where the team sits today.

The narrow win over Fresno State was fairly ugly and a harbinger of struggles to come, but few realized just how far the team had to go until the team's opening round match up in the Maui Invitational, when the Division II host school effectively ran Texas out of the La Haina Civic Center. For many fans embarrassed by the opponent, the defeat to the Silverswords marked the low point of the season, but for my money things didn't truly bottom out until the team's abominable effort against Georgetown -- after which there was legitimate reason to worry whether this team might struggle to play .500 basketball this year.

A week later, Texas looked like a different team when it played UCLA, prompting me to spend my post-game thoughts talking about how encouraged I was despite our having given away the win in the final two minutes. I got blasted for it, but the team validated that view 10 days later when it ran North Carolina out of the Erwin Center in an impressive 81-67 victory that, at least to this point, looks to be a season-saving victory. Stealing a win in East Lansing would have been even sweeter, but while the Longhorns ultimately wore down and fell short, they delivered another encouraging performance, taking a lead into halftime and playing to win the game throughout.

The Longhorns non-conference season wasn't pretty, but as far as this young group had to go and as lost as they looked against Georgetown, that they rallied, grew up, and managed to take an important step forward was a welcome, encouraging sign where none were obviously coming. As important and encouraging as it was to see the huge improvement against UCLA following the loss to the Hoyas, boy does that giveaway loss to the Bruins (who just knocked off Mizzou in OT for their fourth straight win since playing Texas) really sting in terms of a missed opportunity in the resume department. How good would 9-4 with wins over UCLA and North Carolina look after falling to 5-3 with such a deflating no-show versus the Hoyas and losses to Chaminade and USC?

I wrote in my season preview that I thought Rick Barnes meant it when he hinted in September that he'd play 11 guys this year. I also took a stab at projecting the breakdown of minutes across the team, but with Kabongo's suspension extending to 23 games and an ankle injury sidelining Jaylen Bond for all but 17 minutes this fall, the 49 minutes per game I projected for those two sophomores have had to be distributed among the rest of the team -- which is to say, mostly to freshmen.

Kabongo's minutes have largely gone to Javan Felix, with Demarcus Holland picking up more playing time than he otherwise would, as well. In looking at the worst case scenario of an extended absence for Kabongo, I noted in my season preview that I thought Felix would surprise Texas fans in how well he acquitted himself in Kabongo's absence, and that's exactly what he's done thus far, averaging 8.3 points, 6.5 assists, and more than 35 minutes.

If we dig a little deeper into the numbers, the solid job that Felix has done thus far is apparent but it also reveals where Texas would really benefit from Kabongo's presence:

Again, Felix's overall statistical profile is solid, but the numbers also show how and why Kabongo would help this young Longhorns basketball team. To begin with, there is every reason to expect that Kabongo would improve on those numbers from his freshman season -- particularly if, as many think, Kabongo is a better basketball player than he showed last much of last season. But even without much improvement, Kabongo would contribute more of the one thing that is more valuable to this Texas team than anything else: scoring offense.

Kabongo has better ability than Felix to get to the rim, better ability to finish it in traffic when he gets there, and ability to get to the foul line that isn't just better than Felix's but is second to none. Felix is clearly a better outside shooter than he's shown so far (a dismal 3 for 22 on the season), but the low shooting percentage from inside the arc is almost entirely attributable to his inability to score it at the rim, where he's taking a quarter of his shots but making just 38% of his attempts. For context, the only Texas player over the last three seasons to make fewer than 50% of his attempts at the rim was Alexis Wangmene (46% in 2010-11). (For distribution stats, see Jeff's data at Hoop-Math.)

What about Jaylen Bond's minutes? After making a brief appearance in Maui only to injure his other foot and miss another 7 games, Bond finally returned to action last Saturday against Rice, contributing 3 points, 6 boards and a steal coming off the bench to play 12 minutes. It's a little bit more difficult to estimate what impact Bond's presence would have made on this team because it largely depends on whether he's added something to his game that wasn't there a year ago. With the size on this roster, Connor Lammert proving himself capable of contributing solid minutes as a true freshman, and Jonathan Holmes doing his best Jaylen Bond impression on the rebounds, Bond's absence probably hurt less than Kabongo's, but I liked what Bond flashed last year and thought he was destined to improve incrementally each year as he developed his ability to put his superior athletic ability to productive use. For now, it's enough to say that it's a good thing he's back, and that the young Longhorns in the frontcourt benefited from their early baptism by fire.

With the anomaly of getting run out of the gym by Chaminade and the Asian Larry Bird, the Longhorns' defense has been extraordinarily effective thus far this season, holding every single opponent to less than a point per possession. This team is so good, in fact, that Jeff suggested the other day that he thought this year's Longhorns team would prove to be the best defensive unit of the Rick Barnes era. The numbers certainly support the argument so far, as Texas has held opponents to a defensive efficiency rating (DER) of 83.9, which ranks 3rd nationally and if sustained would be the best mark of any Rick Barnes team by a fairly sizable margin.

(Parenthetically, I've also been thinking this group of players will wind up wearing the Best Texas Defense crown, but I've been projecting they'd have to wait until next year, on the assumption that they wouldn't quite top the outstanding 2005-06 team. When Jeff's comment reminded me to look at the numbers, however, I was surprised to learn that the real competition isn't the '05-'06 team, but the Tristan Thompson, Jordan Hamilton, Corey Joseph group from two years ago, which finished with a DER of 87.6, which ranked 2nd in the country. The '05-'06 team was almost as great with a DER of 88.7 rating that ranked 10th nationally, but I had forgotten that they were actually even better on offense, where they had a 118.5 offensive efficiency rating, raking 4th nationally.)

The outstanding DER that this year's team has compiled is owed almost entirely to its ability to induce missed shots. The Longhorns rank just 248th nationally in steal percentage and only 21% of opponents' possessions are ending in a turnover (178th), but succeeding in hanging on to the ball to hoist up a shot against the Longhorns defense has simply meant an opportunity to miss a field goal attempt. Texas' opponents have an effective field goal percentage of 36.9 on the year, the lowest mark in the country, having made just 22.8% of their three point shots (No. 1 nationally) and 38.3% of their two-point attempts (No. 6 nationally), with 15% of their missed field goal attempts resulting from having their shot blocked by Texas (No. 15 nationally).

Here's the upshot of it all: if Texas can find a way to score the ball with any amount of effectiveness, it's going to win plenty of games. Take a look at the Top 10 teams in terms of DER from last year: 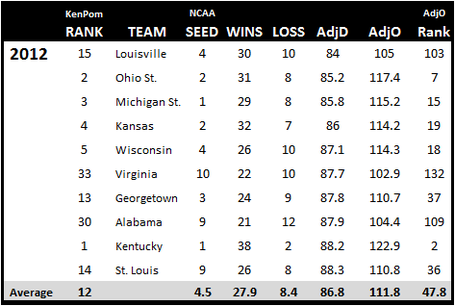 Not only did all 10 teams make the NCAA Tournament, the list includes a pair of #1 seeds, another pair of #2 seeds, and an average seed of 4.5. Some were elite on offense as well, but three teams -- including Final Four participant Louisville -- were not.

Extend the sample size to the previous five years and you see in 2008-11 much the same as last year: 36 of the 40 teams made the NCAA Tournament with an average seed of around 4 and including 16 of the 32 #1 and #2 seeds from the four tournament fields. Also as with last year, many of the Top 10 teams in DER from 2008-11 also boasted great offenses, but a fair number were pretty average on the other end of the floor but managed a lot of wins and an NCAA Tournament berth. And frankly, given the performance record of KenPom's rating system over the past five NCAA Tournaments, the four teams that failed to receive a bid appear to have gotten pretty well hosed. 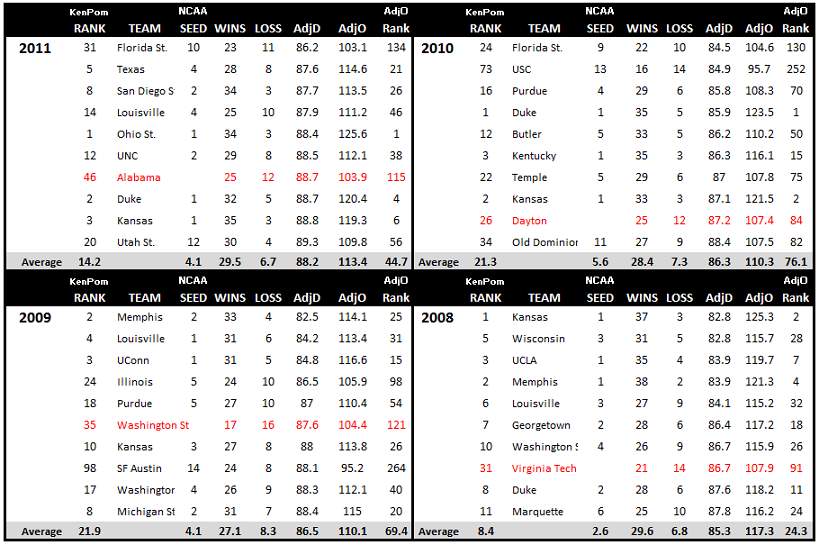 Bottom line? For Texas the rest of the way, it's as simple as this: score, win. With defense allowing less than 85 points per 100 possessions, the Longhorns just need to improve to a slightly above average offensive team and they can win 10+ games in the Big 12 and extend their consecutive appearances streak in the NCAA Tournament to 15.

So... how do they do that? That's the million dollar question... and the one we'll pick up with when this discussion continues in the next edition of the Texas Basketball Report.