The Texas Longhorns once again fell behind an opponent in the first half. And once again, Rick Barnes squad came back. The Texas Longhorns defeated the UT-Arlington Mavericks, 72-69, behind 23 points by Demarcus Holland. Reger Dowell scored 17 points in the loss. Texas played the game without leading scorer Jonathan Holmes, who was away with a death in the family.

After a back and forth opening, UT-Arlington assumed a lead at the 12 minute mark of the first half on back-to-back three pointers by Jamel Outler. It was a lead that would persist until late in the second half, when a Demarcus Holland layup tied the game at 61-61.

Poor shooting, both at the the free throw line -- where the Longhorns went 19-37 -- and from three point range -- where Texas hit 3-15 -- held back the Texas offense. Cameron Ridley, who logged a double-double with 10 points and 11 rebounds, was 6-11 from the free throw line, while Kendal Yancy was 1-6. Aside from a 2-4 three point shooting performance from Holland, the rest of the Horns struggled from the perimeter.

With Texas' perimeter shots not falling, Holland took matters into his own hands, attacking the rim in transition. A steal and a dunk with 1:03 remaining claimed Texas the lead for good.

Finally, for those into this sort of thing, here is a screen-grab of Texas' some of Texas' defensive statistics for the game from Hoop-math. While the Texas offense struggled, the Texas D smothered an inferior opponent. With limited big men available, centers Ridley and Ibeh played together for roughly half of the game. Note that roughly two out of every five Maverick attempts at the rim were blocked by Texas. Ibeh logged five blocked shots, while Ridley posted six. 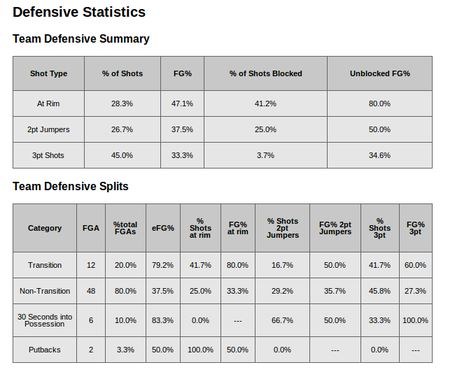