This week we look at the Texas defense during conference play, recap the game against Oklahoma State, and consider Myck Kabongo's return.

Share All sharing options for: Texas Longhorns Basketball: Inside the Numbers, Week 14

At the end of the non-conference season, Peter Bean wrote a post titled Longhorns Close Non-Conference Season With Momentum, Elite Defense. Around that time, Peter and I were trying to determine if this particular iteration of the Texas defense was the best one that Rick Barnes' had ever coached.

It is now a month later, and the Texas Longhorns are a bit more than halfway through the conference season. We can now say that this is not the best defense that Rick Barnes' has ever coached. It's not even close.

While Texas is still holding opponents to a relatively low effective field goal percentage, opponent eFG% is higher during the conference season. During the non-conference schedule, the highest eFG% that Texas allowed in a single game was 47 percent against Michigan State. In four of the Longhorns' ten conference games, opponents have managed an eFG% better than 50 percent. In Big 12 play, Texas' opponents average an eFG% of 44 percent, which is the second lowest total in the conference. This aspect of defense for Texas is still a strength, but it is not the strength that it was during the non-conference season.

To better understand the difference between Texas' eFG% defense during the non-conference season and Big 12 play, I compiled the location specific shooting percentages in the tables below. Opponent shooting percentages are up during conference play across the board. Texas opponents are making more of their shots at the rim and are making more of their jumpers. Texas opponents still aren't shooting well from three point range during conference play, although they are making a higher percentage of threes than the ridiculously low total Texas' non-conference opponents hit.

Perhaps the most significant difference between non-conference and conference games is the percentage of shots that the Longhorns have blocked. During the non-conference season, Texas blocked 16 percent of opponent attempts at the rim, while during Big 12 play the Longhorns have only blocked a pedestrian 9 percent. Opponent shooting percentages at the rim have increased from 55 percent to 60 percent, and this increase is almost entirely due to a reduction in Texas' shot blocking. Texas currently ranks fifth in the Big 12 in shot block percentage.

Why has this reduction in shot blocking occurred? Part of it is surely due to the increase in the level of competition. Texas' average Big 12 opponent is better than the Longhorns' average non-conference opponent, and better teams tend to get their shots blocked less frequently. But part of it has also been due to a reduction of the minutes played by Texas' two best shot blockers: Cameron Ridley and Prince Ibeh. Ridley and Ibeh each have blocked a bit more than ten percent of opponent two point attempts while on the floor this season. During non-conference games, one of the two Texas centers was on the floor 74 percent of the time. During conference games, one of Texas' two shot blockers has only been on the floor 64 percent of the time. Below I have plotted Texas opponents' eFG% versus the percentage of total minutes played by the Ridley/Ibeh combination in conference games. I have also included a best fit line. While there is some scatter, the general trend seems to be that when Ridley and Ibeh play more, Texas' opponents don't shoot as well from the field. 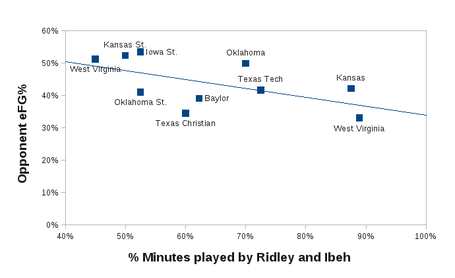 Not everything in that plot can be explained by Ridley and Ibeh. It is hard to imagine that their defense would have made much difference in the Iowa State game, where the Cyclones went 11-26 from three point range. The Kansas State and West Virginia games were different; in these games Texas was beat inside.

Additional pain for the Texas defense has been caused by the Jonathan Holmes injury. Holmes has been the Longhorns' third best shot blocker this season, blocking 4 percent of opponent twos. Holmes has also been Rick Barnes' best rebounder. Texas currently has the worst defensive rebounding percentage in the conference, and Holmes' injury, combined with fewer minutes for Ridley, is part of the problem.

Another area where Texas is last in the conference on defense is when it comes to putting opponents at the line. During Big 12 play, Texas' opponents shoot one free throw for every two field goals they take.

Oklahoma State beat up on Texas, gaining an advantage in both the number of shots attempted, as well as in true shooting percentage. As always, significant advantages in both categories led to an easy Cowboy win.

OSU earned the extra shots on the glass. Travis Ford's team held the Longhorns to an offensive rebounding percentage of 26 percent, while the Cowboys grabbed 41 percent of the possible rebounds when on offense. Texas held a slight turnover advantage, which may seem surprising given the disastrous game Javan Felix had (eight turnover in 27 minutes), but Oklahoma State lead guard Marcus Smart also had some trouble with turnovers, coughing up the ball seven times. Overall, Smart had an outstanding game, but it is important to remember that the OSU freshman can occasionally be shaky with the rock. And while Felix struggled, Ioannis Papapetrou also shared in the ball handling and offensive creation duties, and did so while only turning the ball over in 11 percent of the possessions that ended with the ball in his hands.

Travis Ford's squad was extremely aggressive on offense. They attacked the rim, getting 41 percent of their field goal attempts from in close, while also earning 39 free throws (0.7 free throws for every field goal). Given this shooting distribution, it is striking that the Cowboys only managed a true shooting percentage of 0.483. Oklahoma State's offense was held back by significant trouble knocking down shots. OSU was 3-17 on two point jump shots, and hit 4-16 from three.

The Longhorns had shooting troubles of their own. Texas did well from inside the arc, connecting on 54 percent of their twos, but went 1-18 from three point range. Had Texas just managed to hit a quarter of their threes in this game, things would have been much more interesting.

Marcus Smart led the Cowboys with 6.9 Points Above Median (PAM), which is a high enough total to make it acceptable to look past his turnovers. Smart had a terrific game scoring the ball, getting ten trips to the free throw line, hitting 3-6 from three point range, 2-4 on attempts at the rim, and 1-2 on two point jumpers. OSU only made seven jump shots in the game, four of which were knocked down by Smart.

Jaylen Bond led all Texas players with a PAM of 2.2. Bond knocked down an open jump shot, and had a couple of nice finishes at the rim. While Ioannis Papapetrou played a solid game, going 0-5 from three point range played a significant role in him ending with a PAM of -1.1. But this low PAM value simply means that Papi didn't score very efficiently with his shot attempts. There is more to basketball than just shooting. Papapetrou did well as a playmaker, assisting on 24 percent of his teammates baskets while on the floor, only turned the ball over twice, had four steals, and five offensive rebounds.

Myck Kabongo, and what happens next

After serving his time for lying during an investigation of his off-season trip to Cleveland, Texas sophomore Myck Kabongo returns to the lineup this week. It is hard to know what to expect, and to be honest my track record for predicting things with this team has not been good this year. While I don't expect Kabongo to be a savior, he should make the Texas offense better.

Texas' four biggest problems on offense have been:

1. An inability to get to the rim. On the season, the Longhorns have only attempted 29 percent of their shots from in close, compared with 35 percent a season ago.

2. Turnovers. The Longhorns have turned the ball over in 23 percent of their possessions this season, compared with 19 percent a season ago.

4. Three point shooting. Texas has made only 29 percent of its threes, compared with 33 percent last season.

Myck Kabongo should likely help Texas in at least three of these four categories. Kabongo's strength as a freshman was in attacking the rim and getting to the free throw line. 37 percent of Kabongo's attempts a year ago were layups and dunks, compared with the 25 percent of Javan Felix's shots that come at the rim. And last season's numbers suggest that Kabongo is roughly three times as likely to get to the free throw line as Felix.

Nearly every lead guard that has played for Rick Barnes at Texas has improved when it comes to avoiding turnovers. There is plenty of reason to expect that Kabongo will turn the ball over less often this season than he did last season.

The only area of weakness where it is unclear if Kabongo can help the Texas offense is in three point shooting. Kabongo is just OK as a perimeter shooter. If he helps Texas' shooting, it is more likely that it will be as a passer. 85 percent of three point shots come off of assists in the college game, and Kabongo's ability to attack the defense off the dribble can potentially help to create open looks for three point shooters.

I am a realist; getting Kabongo back won't likely lead to an unexpected run through the Big 12 tournament, allowing the Horns to grab the conference's automatic NCAA bid. My hopes are much more modest; I am hoping that Kabongo's return will bring some energy back to this team and make them a bit more fun to watch.