Texas Breaks Through For Win In Double Overtime, Knocks Off Iowa State 89-86

In Myck Kabongo's season debut, the Longhorns wound up winning an instant classic.

Share All sharing options for: Texas Breaks Through For Win In Double Overtime, Knocks Off Iowa State 89-86

As soon as Tyrus McGee's fourth three pointer of the night swished through the net, completing a 10-0 Iowa State run that flipped Texas' four-point lead into a 63-57 deficit with 3:57 to play, I along with everyone else in the Erwin Center had the same sinking feeling as we conceded inevitable defeat. To my right, Wescott was still screaming at Papi for losing track of McGee, a 45% shooter from three this year. I felt sick to my stomach -- bitter after having let myself get excited only for Texas to cough up another win thanks to mind-numbing errors. "Even with Kabongo back, we've managed to find another new and amazing way to lose a close game," I cursed, to no one in particular.

Not once did I stop believing we were going to lose. When it came down to the final play in regulation, with Texas still trailing by three and the ball at midcourt after a beautifully executed inbounds play, I cursed as Julien Lewis streaked open to the corner but Papi didn't deliver the pass and the window closed, ensuring certain defeat, I assumed. When in overtime Julien Lewis' second three pointer in a row put Texas up 79-74 with 2:28 to play, I hardly had a chance to start thinking we might actually win because moments later I was watching in horror as Tyrus McGee found himself wide open yet again, and everyone in the stadium knew his shot was going in before he'd even released the ball. To add insult to injury, when a minute later Iowa State knotted the game at 79, it had to be on a jumper by Korie Freaking Lucious. Of course we were going to lose.

As the game headed into double overtime, Jonathan Holmes and Myck Kabongo had already fouled out, and Sheldon McClellan had just spent the entire overtime period looking like a zombie -- literally attempting to do nothing with the basketball when it arrived in his hands other than return it where it came from as quickly as possible. 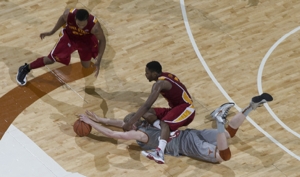 But then... something funny happened. Sheldon McClellan played like a man possessed. He looked and played... determined. Pissed, almost -- like he had a chip on his shoulder. He scored all 10 of Texas' points in the overtime period, grabbed a huge rebound in traffic, and clinched the game with a steal on Iowa State's inbounds. And as the clock wound down with Iowa State down three, instead of watching McGee drain a soul-crushing 25-footer -- which everyone in the stadium expected would happen -- I raised my arms in triumph as Connor Lammert instead made a brilliant hustle play to end the game, diving, extending his arms to snare the loose ball, and run out the final seconds of game time.

Tonight's game was one of the best I've ever attended. It probably won't amount to much when it's all said and done, but everyone in that stadium just wanted a win so badly tonight. It was a small crowd -- terrible attendance, even by Texas' pitiful standards -- but the fans who came tonight were great. We may have expected to lose, but we cheered like fans who badly wanted to win. We booed the hell out of the officials -- none louder than Wescott (who nearly had an aneurysm when the official prematurely clapped at our huddle following Jonathan Holmes' fifth foul, failing to give us the 60 seconds we were allowed under the rules) and I.

More importantly, though, the players wanted it just as badly, and kept fighting -- even after they'd more or less given away the game. I was happy as hell for our team tonight, who have had everything go against them all season and looked to be heading for another dose of the same tonight. The officials were calling the game like they were in Hilton. Longhorns in sure position to score on a dunk or lay up saw the ball bounce off their hands, while on the other end every missed Iowa State shot seemed to bounce into the hands of a Cyclone. Iowa State's veteran team turned it over just 8 times all game; we coughed up 18 of our possessions. Same song, different verse.

I'm fairly certain that this would have been the most deflating loss by a 2-8 team in the history of sports. Really, it would have been crushing -- for the team and fans alike. Instead, the team finally broke through. They scrapped back from down 6 to send it to overtime on an amazing three pointer by Papi. They survived all their mistakes, survived with Kabongo on the bench in double overtime, and pulled out a win. In that sense it was the sweetest kind of win -- not the most important, or the most impressive. But one that they so badly wanted and needed. And they managed to do it.

It was a great basketball game. Exciting, tense, infused with energy and meaning...

And when it came time to sing the Eyes, for at least one night this season, Texas basketball was great.