An exasperated Rick Barnes told the media after Texas' loss to Oklahoma State that Myck Kabongo and Demarcus Holland will both be starting on Wednesday night when the Iowa State Cyclones visit Austin.

Share All sharing options for: Myck Kabongo, Demarcus Holland Will Start on Wednesday Against Iowa State

Javan Felix and Sheldon McClellan both had forgettable afternoons today in Texas' 72-59 loss to the Oklahoma State Cowboys, after which the team to fell 3 games under .500 overall and to 2-8 in conference play. Felix finished the game with an atrocious stat line of 27 minutes, 8 points (3-8 FGs), 1 rebound, 5 fouls, 1 assist, and 8 turnovers. Most maddening of all was the fact that at least half of those 8 turnovers were unforced -- sloppy, braindead plays that every player should know better than letting happen and of which a 5-10 player should be especially wary.

For his part, Sheldon McClellan wasn't much better, if at all. The sophomore wing looked terrible and played passively throughout the first half, culminating in a sequence of three consecutive plays that saw McClellan fail to get over a ball screen to allow Markel Brown an uncontested three, miss a fadeaway jumper on the other end of the floor (his third straight shot off balance), and then fail to get back in transition to allow Brown a lay up. Barnes had seen enough, and other than 32 seconds at the end of the half McClellan sat on the bench until the 12:01 mark of the second half. When it was all said and done, McClellan played 20 minutes and scored just 4 points on 2-6 shooting, with only 2 rebounds and not a single trip to the free throw line.

You'll have to ask him. I have no idea. It's consistency. You have to realize, too, that things change as you get older. Roles change every year and game to game. We need Sheldon to score. That's what he does. We're not asking him to guard anybody other than to be solid. He's got to work at running the floor. Guys who really want to score will hunt for shots. They don't want to get back and play a set defense because they know teams will game plan. So you want to get out in transition and run. He should be one of the best at running the lane, but he doesn't do that consistently. When he gets screens, he needs to come off them. He needs to fight to cut. They're going to make him work. He can't make one cut, not get the ball and stop or throw his hands up in the air like he's getting fouled. He needs to cut. He needs to play. With that said, that's why I've always said that when you're a guy that people count on, it's a lot of responsibility. You've got to be ready to play every single night. Even if you don't get the ball, you need to think to yourself, "If they're going to guard me this hard, I need to make cuts and get my big guys some shots." 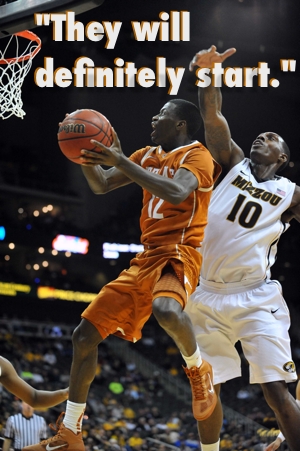 After the game, Barnes didn't hesitate when asked if Myck Kabongo (returning from his B.S. 23-game suspension) and Demarcus Holland (who played 35 minutes against Oklahoma State and turned in another strong performance) would start on Wednesday. "They definitely will start," Barnes said.

It's hard to argue that they shouldn't given the way McClellan and Felix played today. While Felix has done an admirable job playing a bigger role than was expected of him on this team (incredibly, he still leads the Big 12 in minutes), all those minutes are starting to show, Myck Kabongo is fresh, and Demarcus Holland continues to come on stronger and stronger every game.

As for McClellan, his problem is mental, and that's been obvious since he walked on campus. While immensely gifted, he struggles to maintain his focus and doesn't seem to have a good understanding of what he does well, or how to do it on a consistent basis. I wrote way back at the beginning of last year that McClellan would be a terrific basketball player when the light finally came on for him... when he's about 25 years old. That still looks about right, unfortunately.

Who knows whether Kabongo and Holland will actually play well on Wednesday -- given the way this season has gone, they'll both probably turn in atrocious performances -- but when you're struggling like this team is struggling, you want to do something about it but there aren't any easy answers.

Barnes was asked whether he and his team felt embarrassed and frustrated by today's loss to Oklahoma State.

Yes, I'd add baffled to it because I wish I could show you the way we practiced the last few days. I think that's what you would say, too. Why? I can't explain it. Other than when the lights come on - on the court, we don't play the same way. I can't explain it. Someone asked about confidence. When you're turning the ball over and doing things like that, I can't answer it. I don't see it. I don't understand it. We didn't rebound. It wasn't a very pretty game anyway you look at it. Defensively, we need to rebound better. We need to get to the glass. I thought they did a good job rebounding the ball. We've got to put the ball inside some and get something going. You need to catch it, but you need to have guys who are willing to put it in there when guys are open. Everybody talks about playing hard. You've got to play hard on offense. You need to set good screens and you need to make hard cuts, knowing that you could be denied. You need to make one or two cuts. You've got to move the ball. That's all the things we've talked about and we've done. There will be a different team on the floor Wednesday night. I can tell you that.