Inside the Numbers looks back at the Longhorns' win in Lubbock.

Share All sharing options for: Texas Longhorns Basketball: Inside the Numbers, Week 18

Texas ended its regular season with an overtime win against Texas Tech. It was far from an inspiring performance, although no road win should ever be taken for granted. Just ask Kansas, who honked their shot at an outright Big 12 title by getting blown out in Waco last night.

While the Longhorns played pretty uninspiring ball yesterday, they finished their season strong, going 5-3 after Myck Kabongo's return. And now they prepare for the Big 12 tournament, where they will attempt to play their way into some sort of additional post season.

This is a game that nicely illustrates the value of extra shots. Texas was able to win a game they probably shouldn't have won because they earned so many second chance points on the offensive glass. Texas' 8 extra shots ("shots" refers to the composite number FGA + 0.475xFTA) were more than enough to make up for Texas Tech's true shooting percentage advantage. Although as much as anything Texas won this game because the Red Raiders went 20-37 from the free throw line.

Texas' assault on the offensive glass made up for a terrible afternoon shooting the ball. The Longhorns were 7-14 on layups and dunks and 7-27 on mid-range attempts. The Texas offense was saved by hitting 6-16 from three point range, getting 37 trips to the free throw line, and of course by earning all of those second chance shots. While virtually every Longhorn got in on the offensive rebounding fun, Cameron Ridley did particularly good work, pulling down six offensive rebounds, which was approximately 28 percent of the possible rebounds while on the floor.

Texas Tech's defense was able to neutralize Longhorn guard Myck Kabongo. Kabongo had a miserable afternoon, with -8.2 Points Above Median (PAM), on 0-12 shooting from the floor. (Kabongo did hit 7-8 from the free throw line.)

Texas Tech focused their entire defense on Kabongo, working to get the ball out of his hands, and then making every effort to not allow Texas' point guard to regain possession. I have pulled a couple of screen shots below to show just how Texas Tech worked to take Kabongo out of the game. 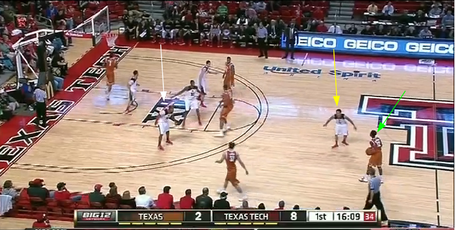 One reasonable way to counter this sort of defense would be to have Kabongo attack the help defender (the white arrow defender), hoping to either draw a foul or create an open look for Ioannis Papapetrou. This sort of approach would turn this defense, which is basically unsound, into a trap, and force Tech to rotate and recover.

Instead of attacking, Kabongo typically chose to pass the ball off without forcing the defense to commit. The frame below shows what has happened after Kabongo passed the ball to Papapetrou on the wing. Note that Papi's defender, who had been playing the gap against Kabongo, has no trouble recovering. Also notice that Kabongo's defender (still identified with the yellow arrow) is playing straight denial defense on Kabongo, working to prevent the pass back. The rest of the Red Raider defense is playing standard man-to-man, which is how they played when Kabongo did not have the ball.

Playing defense this way essentially makes the game a four on four contest when Kabongo doesn't have the ball. Early in the game these tactics worked, but as the Longhorns adjusted, Sheldon McClellan was able to take advantage of the extra space this defense created. McClellan led Texas with a PAM of 5.2.

The screen shot below shows where things stood with 8.6 seconds left. McClellan is at the top of the screen, while Kabongo is at the bottom. The Texas Tech defenders are denying the ball from both Kabongo and McClellan, determined to prevent either of these guys from beating them. Of course, this comes at a cost. This sort of defense creates wide open driving lanes. With no extra defenders available to help on the perimeter, there is essentially no way that Tech could prevent Lewis from getting into the lane. It is too much to ask a single defender to guard his man without help for three or four attacking dribbles. 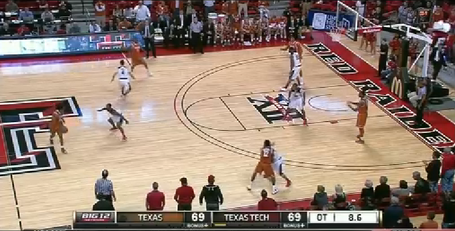 Dejan Kravic and Ty Nurse led Texas Tech with PAMs of 3.9 and 2.2, respectively. Texas Tech will rightly blame this loss on a miserable performance from the free throw line, and a total inability to get defensive rebounds. It was a game that the Red Raider's probably should have won, but they didn't. Longhorn fans understand what this feels like, and can relate to their brothers and sisters in Lubbock.