A Statistical Recap of the 2013 Longhorns Basketball Season: The Texas Defense

Part II in a two part look at the Texas season focuses on the defense.

Share All sharing options for: A Statistical Recap of the 2013 Longhorns Basketball Season: The Texas Defense

This article looks at how the Texas defense fared during Big 12 play. It is the companion to an earlier article looking at the Texas offense.

One of the most surprising things that happened this season was the collapse of the Texas defense. While Texas' offensive struggles earned all the press, the defense during Big 12 games wasn't very good either. During non-conference play, Ridley and Ibeh dominated the paint, making Texas one of the very best defenses in the nation. But during conference season, Texas allowed 1.04 points per possession, ranked sixth in the Big 12. The average Big 12 team gave up 1.02 points per possession.

The problems of Texas' defense during the Big 12 season are highlighted in the waterfall chart below, which compares the Texas defense to the average one in the Big 12. Red bars indicate categories that reduce points per possession, while green bars highlight categories that increase points per possession. Since this chart pertains to defense, red is good, and green is bad. (Please see yesterday's post for more on where this chart comes from.)

Texas' three biggest problems on defense were poor rebounding, too much fouling, and a lack of any exceptional traits.

2. Also for the second year in a row, the Longhorns had trouble with fouls. Over the years, Rick Barnes' defenses have been successful because of their ability to hold opponents to low two point shooting percentages without fouling. Over the last two seasons this hasn't happened. As he did his freshman season, Jonathan Holmes struggled to defend without fouling. For their part, Cameron Ridley and Prince Ibeh did what freshman centers typically do; they fouled a lot.

3. A hidden problem of the Texas defense was that it didn't excel at anything during the conference season. During the non-conference slate, when Ridley and Ibeh were blocking shots left and right, Texas' two point field goal defense was stellar. Texas' ability to protect the rim during that period of time made the Texas D seem legitimately great, even if those great defensive games weren't always coming against the best teams. As the season wore on, and Ridley and Ibeh's minutes dropped off, the strength of the Texas defense dissipated. I want to dive into this more deeply below.

Looking at how Ridley's and Ibeh's playing time affected Texas

I wanted to try to understand how much of an effect Ridley's and Ibeh's playing time had on the Texas defense. Because many non-conference games came against much weaker opponents, it is best to look at conference games only, as I don't want to unfairly bias the results. The plot below shows how opponents' two point field goal percentage changed as a function of the total percentage of minutes played by the Ridley/Ibeh during the Big 12 regular season. 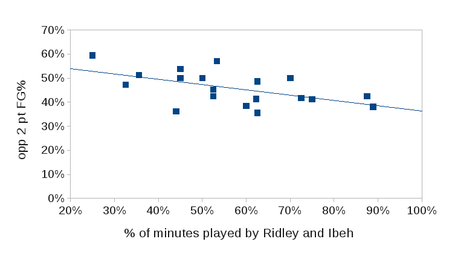 The figure above is not surprising. Of course opponent two point shooting percentage goes down when the two best shot blockers for the team play more. This effect seems to translate to the bottom line of defense, opponents' points per possession, as shown in the figure below. 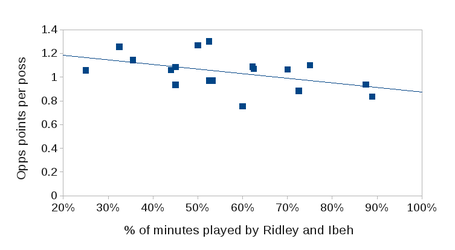 More minutes for Ridley and Ibeh potentially come at a cost. It would be pretty reasonable to hypothesize that giving more minutes to the pair, and fewer to Connor Lammert, would likely hurt the offense. But when we look at the actual data, we don't see much of an effect. 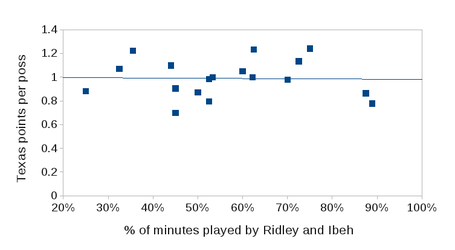 This seems surprising, but in a way it makes sense. While Lammert was measurably better on offense than either Ridley or Ibeh, none of these three players played a major role in the Texas offense. Lammert used only 13 percent of Texas' possessions while in the game, and took only 14 percent of the Longhorns' shots. Ibeh and Ridley were similarly only minor players in the Texas offense.

In the previous post, I highlighted Texas' problems on offense during the 2013 Big 12 season. The most significant problem was Texas' troubles with three point shooting. While turnovers gave Texas trouble during the non-conference season, the turnover disasters were mostly a thing of the past by the time Big 12 play started.

This post looked at the defense. Texas' key defensive problems were poor rebounding and excessive fouling. Additionally, the Longhorns didn't really excel at anything defensively, and more minutes for Ridley and Ibeh would have likely made the Texas defense better, while doing little harm to the Texas offense.