Texas Longhorns Basketball: Inside the Numbers, How Texas Beat Baylor

Share All sharing options for: Texas Longhorns Basketball: Inside the Numbers, How Texas Beat Baylor

This week I would like to highlight the Texas - Baylor game, and take a look at just how the Longhorns locked up Baylor's offense. While for good reason much of the story around this game was about the 27 point performance of Isaiah Taylor, the even bigger story should be the performance of the Texas D. Saturday in Waco, the Texas defense held the Baylor offense to a season low 0.84 points per possession, a substantial result against a team that came into the game scoring 1.17 points per trip down the floor.

The Baylor Bears roster presents a staggering amount of talent. Scott Drew's squad features future NBA big men Cory Jefferson (6-9) and Isaiah Austin (7-1). Drew has at his disposal the lighting quick Juco transfer Kenny Chery. And Baylor sports players like Rico Gathers and Ish Wainright, men with outsized physiques that would seem more at home in the League of Justice than they do on a basketball court.

But with all that talent, the most dangerous guy on the floor is the floppy-haired kid from Oakville, Ontario. Brady Heslip is one of the nation's best three point shooters. He came into Saturday's game with a 48 percent shooting percentage from beyond the arc.

Regular readers of this column know that I am fond of a number I call Points Above Median (PAM), which measures how many "extra" points a player scores relative to the number of shots he takes. A player with a large PAM total improves his teams points per shot attempt more than a player with a small PAM value. Heslip's three point shooting had generated 52 points above median coming into Saturday's game against Texas. Baylor's season total PAM value prior to this game was 213. Any sensible game plan for defending Baylor has to deal with Heslip.

From the moment Heslip entered the game early in the first half, Texas' defensive plan was clear. Rick Barnes assigned Javan Felix to guard Heslip, and only Heslip, removing Felix's help-side defense responsibility.

While Felix started off on Heslip, later in the game other players would take their turn, defending the Baylor guard in the same way. In the snapshots below, we will see exactly how Texas' approach to defending Heslip worked. These four screen captures all come from a single possession in the first half, and proceed in chronological order.

The image below sets things up. I have indicated where the ball is in each frame by using a cyan arrow. In this image, the ball is on the wing, on the near side. Rico Gathers is posting up on the near-side block. Heslip and Felix are on the opposite side of the floor, which I have labelled with the phrase "Felix Island." 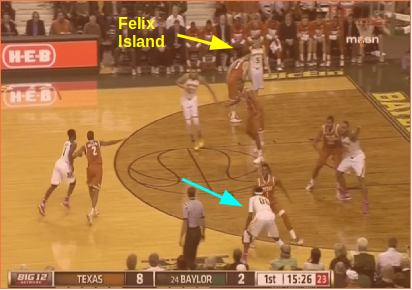 What is different about the way Felix is guarding Heslip? Felix is several passes away from the ball. Normally in this situation he would be in "help-side" defense, sagging off towards the paint in an open stance, seeing both the ball and his man. But he clearly isn't worried about the ball. He is just worried about Heslip.

In this possession, Baylor appears to be running some sort of set play to either get Gathers the ball on the low block or create an open three for Heslip. The play starts with ball reversal. If we advance a few frames, we reach the stage shown in the image below. Here, Austin has the ball at the top of the key. Heslip is working to set a screen across the low block for Gathers. 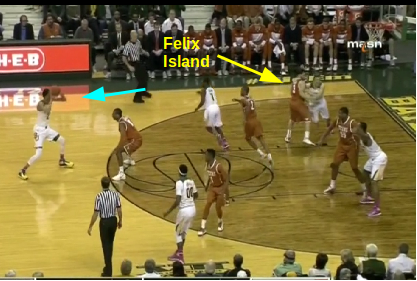 In the next frame, we see the moment just after the screen has been set. The ball has now been completely reversed to the opposite wing (cyan arrow). Cameron Ridley is fighting through the screen. Baylor's hope is that Heslip's defender will become distracted helping Ridley defend Gathers. That moment of distraction will create space for Heslip, who is preparing to run off a screen set up top by Austin, who is now indicated with the red arrow. But Felix will not be having any of that. Felix is not distracted. His only worry is Heslip. 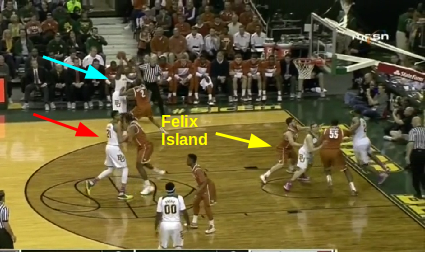 The play ends with the ball being thrown to Gathers in the far corner. (Why?) With the ball in the corner, Ridley is guarding the ball, with three other defenders in help-side stances. But Felix remains only worried about Heslip. 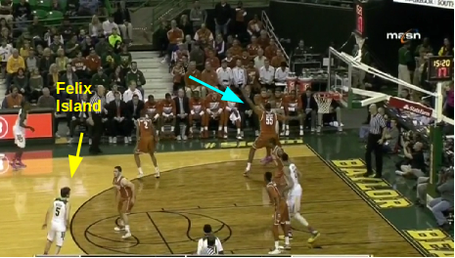 Texas' basic approach to defending Heslip proved to be successful. The Baylor guard ended the day scoring two points, while going 0-4 from the three point line.


The battle of the boards

Taking Heslip out of the game and turning things into a four on four contest wasn't the only thing the Longhorns had to do to hold the powerful Baylor offense to a season low 0.84 points per possession. Texas also needed to control the defensive glass. Three point shooting, while important, is only the second best thing that the Baylor offense does. The best part of the Baylor offense is offensive rebounding. Coming into the Texas game, the Bears had rebounded 44 percent of their own misses. The extra shots the Bears earn on the offensive glass are worth an extra 7 points per 100 possessions when compared with an NCAA median team. (Baylor three point shooting is worth an extra 5 points per 100 possessions.)

If you keep Austin, Jefferson, and Gathers off the offensive glass, you take away the thing that Baylor does best. Texas did this, limiting Austin and Gathers to two offensive rebounds each, and shutting out Jefferson on the offensive glass. On the game, Baylor only got to 28 percent of its own misses, which is the lowest offensive rebounding rate the Bears have had in a game all season. And Isaiah Austin managed only two putback attempts, going 1-2, while no other players on Scott Drew's team attempted a single putback shot.

Texas center Cameron Ridley dominated the glass, getting 10 defensive rebounds, or approximately 33 percent of the possible rebounds he could have captured while on the court. But it was more than just Ridley contributing. Jonathan Holmes grabbed five defensive rebounds, Lammert got to four in only 16 minutes of action, and Demarcus Holland and Martez Walker each captured three of their own.

The combined effect of this was that Austin, Gathers, and Jefferson were non-factors on offense, each logging negative PAM totals for the game.

It isn't always possible to stop another team's strengths -- they are strengths for a reason. But when you can, it usually delivers a favorable outcome. In face-guarding Heslip, Rick Barnes traded a knight for a rook, giving up a some help-side defense in exchange for keeping Heslip from causing problems from long range. And Texas' rebounding strength won out over Baylor's ability to crash the offensive glass; here Texas effectively bottled up the Baylor queen.

With these two key pieces off the board, Baylor didn't stand a chance. The Longhorns won by 14 points on the road in a game that wasn't as close as the score would indicate.

For the rest of the season, I would like to start to experiment with the format of these Inside the Numbers articles. Rather than taking a game by game look each week, I would like to try some new things out, with one example being this article. Let me know your thoughts in the comments.