Texas Longhorns Basketball: Inside the Numbers, What happened against Kansas State

Share All sharing options for: Texas Longhorns Basketball: Inside the Numbers, What happened against Kansas State

The Texas Longhorns endured a viscous beating in Manhattan, Kansas on Saturday. The Wildcats were outstanding at both ends of the floor, while Texas looked lost.

Let's pick through the rubble and see just how it happened. This should be... fun.

Building a defensive game plan is all about trade-offs. A coach has many options for deploying his defense against an opponent, but inevitably is limited by the fact that no one player can be in two places at once.

Each game, a coaching staff needs to consider questions like:

I often evaluate these sorts of decisions with a statistic call Points Above Median (PAM), which measures how many "extra" points a player scores relative to the number of shots he takes. PAM helps to reveal what a particular team or player does best, and can be a useful starting point for organizing thoughts around what the defensive priorities should be.

In the first match-up between Kansas State and Texas, Gipson did most of the damage, posting 4.9 points above median. In this context, I suspect that Rick Barnes set up his defense to limit chances for Gipson, by packing the paint with defenders. I can only say "suspect" because I have no insight into Barnes' thought process. But from my study of the game tape, it is clear that Texas was sagging help-side defenders deep into the paint. Recall that this approach was quite successful against Kansas a week ago.

The approach basically worked against Gipson, who was limited to a PAM of -2.7. The problem was that Foster and Spradling tore the Texas defense apart. Foster went off, finishing the game with a PAM of 16.8, while Spradling chipped in 5.2. Both players did the bulk of their damage from the three point line.

One of the best examples of how Texas' approach to defense created trouble from three point range occurred at 13:36 in the first half. In the image below, the ball is in the upper corner. Isaiah Taylor is two passes away, and is collapsing off of Spradling deep into the paint. This is a very different approach from the one Rick Barnes used against Brady Heslip several weeks ago. Barnes assigned a defender to shadow the Baylor sharp-shooter everywhere he went, eliminating all help-side defensive responsibility for Heslip's defender. Foster and Spradling didn't receive the same treatment. 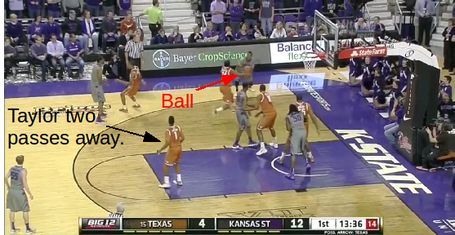 As the dribble penetration begins, Taylor collapses further into the paint. The ball handler is bottled up, with no real chance to penetrate further. 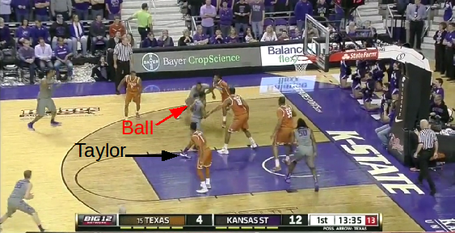 But he doesn't need to go further. He makes the easy pass to Spradling, who buries the three. 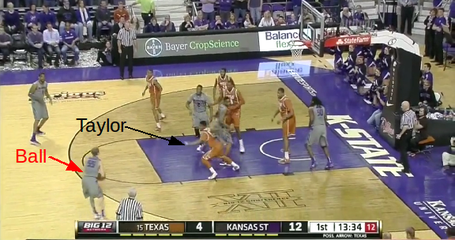 Marcus Foster was able to get rolling early. His first three point shot came against Texas' 2-3 zone defense. Rick Barnes has played more man that zone this season, but his general pattern has been to switch to a zone defense on in-bounds plays underneath the basket. Many coaches like to do this, as it makes it hard for players to be picked off, which limits easy layups underneath off of an in-bounds play.

After the Wildcats passed the ball in bounds against the Texas zone, they set up as illustrated in the image below. The ball is on the near side, and is indicated with a red arrow. Foster is on the far side wing. I have also indicated with a red circle the "gap" in the defense that Kansas State will attack to get an open look for Foster. 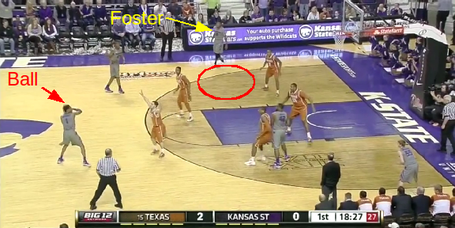 When you think about defense, gaps are very important. This is particularly true against a zone defense, where one of the best ways to attack is to use ball reversal to expose defensive gaps, and then attack these gaps off the dribble. Usually this attack will draw two defenders, which creates an opportunity to kick the ball out to an open man, who either will get a three point attempt or a chance to again attack off the dribble. This is exactly the approach Kansas State will take here, and they will do it with ruthless efficiency.

The ball reverses in the image below. The gap (red circle) is within reach. 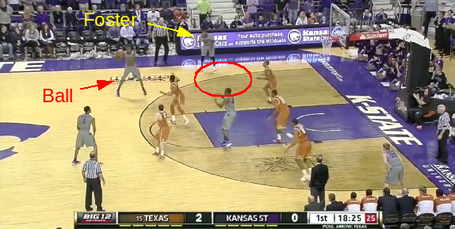 Advancing just a few frames, we see the start of dribble penetration. Both Demarcus Holland and Isaiah Taylor collapse to absorb the penetration. 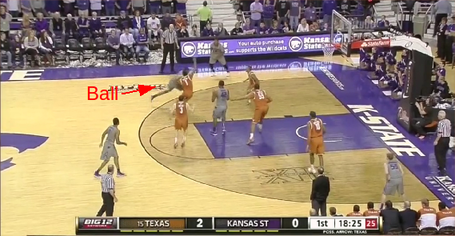 A simple pass finds Foster open for his first three of the day. 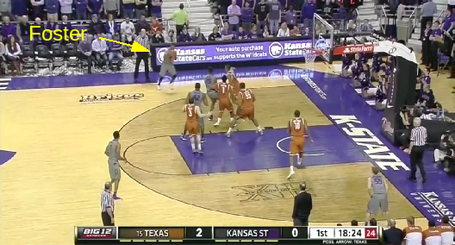 Turnovers were also a big problem

The Longhorns turned the ball over in 28 percent of their possessions. This was an absolute killer in a game where the Kansas State offense was rolling. The Wildcats were able to convert many of these turnovers into easy points, making things even worse for Texas. One in five K-State attempts on the afternoon came in transition after a steal, and Bruce Webers' team ended up with an effective field goal percentage of 111 on these shots.

Early in the game, we saw several examples of Texas turnovers undermining the offense before it had a chance to start. After Foster's first three (shown above) Isaiah Taylor attempted to counter attack in transition, which is something that he has done so well this year. In the image below, he is preparing to attack the rim. 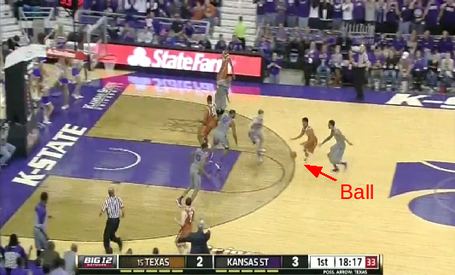 But while Taylor appears to be on the attack, the Kansas State defender is able to deflect the ball away from behind. That is good defense, reaching in with the right arm to knock the ball free without fouling. 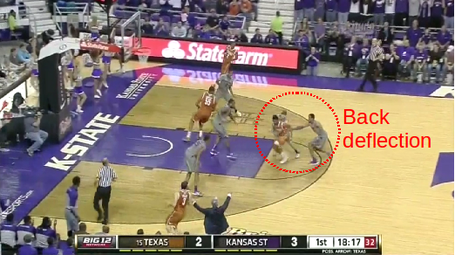 The result of this steal is that Kansas State ends up on the attack, with a 3-2 fast break. This is never a good situation for the offense, and the result will be an open three for Foster. 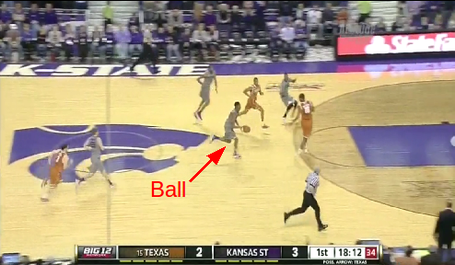 The ball enters the paint, and gets passed back out to Foster, who is spotting up from three. It will be his second three point basket of the game. 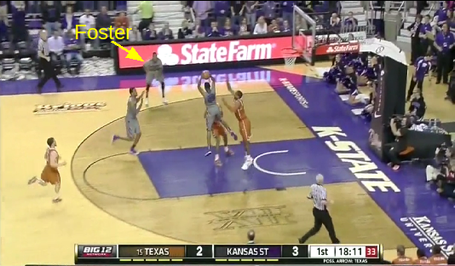 A few minutes later, Texas turned the ball over again. Kansas State is an excellent defensive team that emphasizes jumping through screens and pressuring perimeter passes. It can be difficult to run set plays against such a defense, as we will see below.

In the image below, Demarcus Holland has the ball on the opposite wing. Texas is preparing to run a double screen for Martez Walker, an action that Rick Barnes uses a lot. Kansas State is ready for it. Isaiah Taylor will pin down on Walker's defender, and Jonathan Holmes will set the second stage of the double screen. 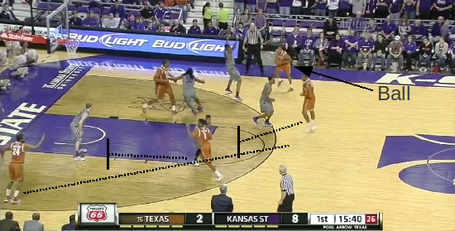 But on the initial pin-down, Taylor and Walker's defenders switch, as indicated below. And knowing where the play is going, the defender beats Walker through the screen. 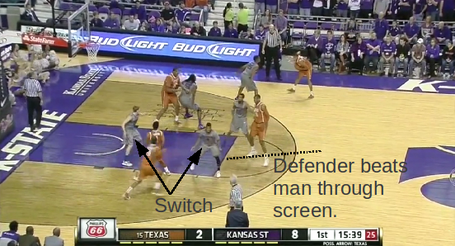 Texas doesn't get to shoot off the double screen, but no harm is really done. Holland still has the ball, after not being able to swing it to Walker. Note where Walker's defender is. He is pressuring the pass between Holland and Walker, taking the Horns out of their offensive set. But in the process, this opens up a nice driving lane for Holland. You beat teams that pressure passing lanes by attacking off the dribble. Holland is ready to attack. 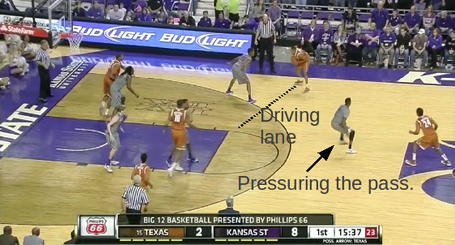 Holland drives the basket, collapsing the defense. Isaiah Taylor is open, and if Holland kicks out to Taylor, the Texas freshman will be able to attack an out of position defender off the bounce. But instead of doing that, Holland over-penetrates and tries to bounce pass to Holmes. This results in a turnover. 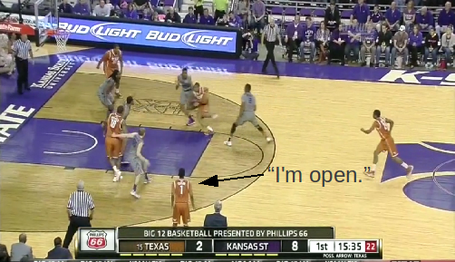 Of course, no blowout loss would be complete without a few defensive breakdowns. Early in the game, Foster caught a lob for an easy dunk against Javan Felix. The image below sets up the action. The ball is on the near-side wing. Felix is guarding Foster, and has dropped back into help-side defense. But notice where Felix is looking; his head is turned towards the ball. Watching the play, Felix periodically turns his head and looks back to find Foster. 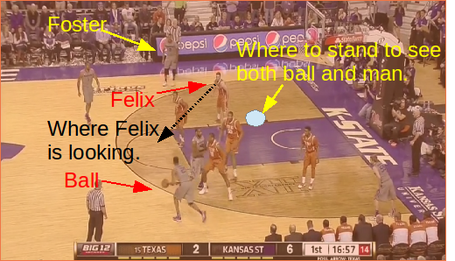 But that is just bad defensive positioning by Javan Felix. Felix instead needs to be a few steps back, as I have indicated in the photo above. If he stands further back, he can take an open stance and see both the ball and his man without having to turn his head.

Foster responds to this just has he should. He sees the back of his defender's head, and cuts to the basket. Good things will be waiting for him there. 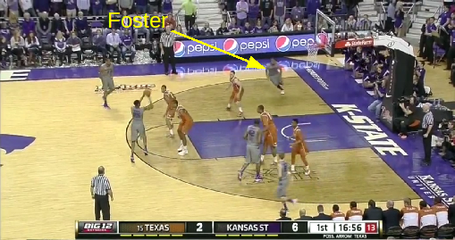 The play ends with the image below, with Foster hanging from the rim. 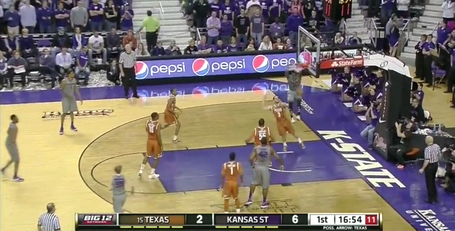 I haven't captured all of the ugliness for Texas, but I don't see the need to continue to beat horse; it stopped twitching 500 words ago. But just in case you haven't yet had enough, you will perhaps be interested to learn that Texas was 7-21 on shots at the rim.

Texas was terrible on Saturday at both ends of the floor, and Kansas State played exceptionally well. That is never a good mix. Great K-State defense and unforced errors by the Texas offense created easy turnover chances for Weber's men. Meanwhile Marcus Foster and Will Spradling made the collapsing Texas defense pay from three.