Texas Longhorns Basketball: Inside the Numbers, Packing the Paint

Sometimes winning the battle in the paint isn't enough.

Share All sharing options for: Texas Longhorns Basketball: Inside the Numbers, Packing the Paint

After starting the Big 12 season 7-2, the Texas Longhorns have encountered more resistance. Since a February 4 road victory against TCU, the Longhorns have had to face several of the better teams in the Big 12 on the road, and have predictably struggled. Since that victory in Fort Worth, Rick Barnes' team has gone 3-4, with all three wins coming in Austin, and all four losses on the road.

Over the last several weeks Texas has had difficulty stopping opponents. In the last four games the Texas D has allowed an average of 1.2 points per possession. The Longhorns are 1-3 over this stretch.

So what has been the problem with the Texas defense during this period? While it hasn't been one single thing, one consistent issue over the last two weeks is a lack of opponent turnovers. This iteration of the Texas Longhorns isn't a team that forces a bunch of turnovers, but over the last four games Texas opponents have posted turnover percentages of 8 percent, 11 percent, 9 percent, and 10 percent. This is an exceptionally low turnover rate when we consider that slightly fewer than one in five possessions result in turnovers in college basketball. Over the last four games, Texas' defense has turned opponents over in about one out of every ten possessions.

While you can have a perfectly good defense with a below average opponent turnover rate, you start at a disadvantage when your defensive turnover rate is nearly half the national average.

All season long, the Texas defense has been heavily invested in protecting the rim, dropping extra defenders into the paint. The Texas D consistently gets results that go along with this strategy. For example, in Saturday's loss to Oklahoma, the Sooners only managed to get 14 of their 59 shot attempts on layups and dunks, and OU only converted six of these shots in close.

It is hard to drive the ball deep into the interior of the Texas D. The image below shows the Texas defensive configuration during a second half possession in Saturday's game in Norman. Buddy Hield has the ball, and he is being guarded by Damarcus Croaker. Croaker has a lot of help guarding Hield (he needs it*), with Felix and Lammert both sinking deep into the paint to take away a chance to drive at the rim. This is how Texas has guarded scoring wing players all season. In many games, it has been quite effective. 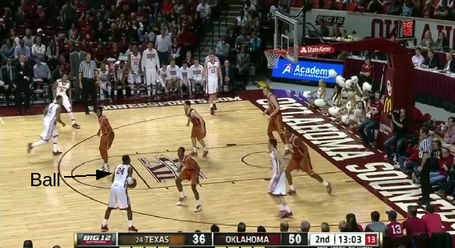 (*This possession plays out with Croaker getting beat on a straight line drive to the basket, which collapses the Texas defense, leading to a wide open three for the Sooners. I briefly contemplated using this space to catalog all of Croaker's second half defensive breakdowns, but I just didn't have the heart to do it. If you watch the middle of the second half against OU, you will see that the Sooners get wide open threes in three consecutive possessions simply because of defensive breakdowns by Croaker. OU only made one of these three shots; things could have been much worse.)

One consequence of playing defense in this collapsed way is that it reduces the number of deflections and turnovers a defense produces. When this defensive style is employed against teams like Oklahoma that rarely cough the ball up, a low turnover game is an inevitable result.

To make up for such an abnormally low turnover rate, the defense has to do something else exceptional. Texas' defense of the rim was a good starting point, but the problem for the Horns was that Oklahoma shot 10-25 from three point range, which is another risk a team runs by collapsing the defense so tightly around the basket. When a team shoots that well, and only turns the ball over seven times in a 67 possession game, it is going to put up some points.

Opponents pack the paint against the Longhorns, too

For Texas Longhorns opponents the defensive game plan typically focuses on keeping the ball away from the basket. In particular, opponents are working hard to limit Cameron Ridley's chances, and to cut down on Isaiah Taylor's drives at the rim.

This week the Longhorns faced two very different defensive approaches with the shared goal of keeping the ball out of Ridley's rather large hands. Baylor fared far better against Ridley than did OU. I often use a statistic called Points Above Median (PAM), which measures how many "extra" points a player scores relative to the number of shots he takes. Baylor limited Ridley to a still good PAM of 3.4, while the Texas center managed a PAM of 5.8 against the Sooners.

Baylor plays a lot of zone. Against Texas, the Bears played a very tight zone designed to make both entry passes and dribble penetration difficult. In the image below, we see the defensive configuration of Baylor when Taylor has the ball. Note that two defenders are accounting for him, limiting his chance to attack off the dribble, while also denying any chance he has of getting an entry pass inside. Taylor is not a threat to shoot from the perimeter, so Scott Drew's decision to guard him this way makes sense. 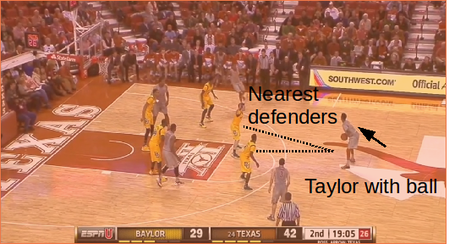 Of course, Javan Felix went 7-9 from three point range against Baylor, so the Bears couldn't exactly afford to stay back, packing the paint, when he caught the ball. In the second half, when Felix had the ball, a defender had to challenge him. 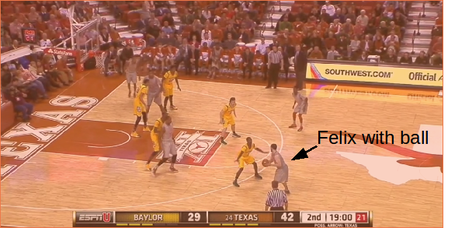 The Sooners took a different, and somewhat less successful, approach to keeping the ball away from Cameron Ridley. The image below is taken from the second half of the game. Javan Felix has the ball in the upper right portion of the image. Ridley is fighting for position on the block. His defender is "fronting" him, playing between Ridley and the ball. 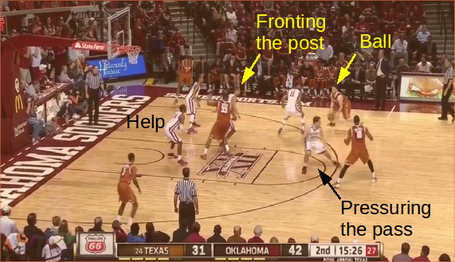 In order to make this sort of defense work, the defense needs to also account for the lob pass over the head of the fronting defender. In this case, Damarcus Croaker's defender has dropped underneath the basket to prevent the lob.

Such an approach to defense does a good job of preventing initial ball entry into the post. However, it is very vulnerable to ball reversal. If the ball reverses to Holmes, and then possibly to Croaker, Texas will have good options to score. Ridley will be able to seal off his defender (something he did throughout the afternoon) and receive the ball inside. Additionally, Croaker would potentially have the chance to either shoot or attack a defender on the run. (Croaker unfortunately was 0-3 from three point range; the Longhorns as a team were 3-19.)

It is for this reason that it is very important that Holmes' defender make it difficult for Texas to reverse the ball. Note that he is not collapsing, but is denying the ball reversing pass to Holmes. When OU was able to keep this pass from occurring, the Texas offense struggled. But when this pass took place, the result was frequently an easy pass inside to Ridley.

All in all, OU seemed to make the right bet. While Ridley was able to capitalize on ball reversal, Texas frequently was unable to move the ball away from the initial side of the floor. Denying these reversing passes is part of what led to 16 Texas turnovers. Additionally, the Texas guards on the weak side were unable to make the OU defense pay. Among Texas' six perimeter players, only Demarcus Holland and Kendal Yancy finished the game with positive PAM contributions. (Yancy had a PAM of 1.7 in very limited minutes, while Holland had a PAM of 0.2.)

There are a lot of different ways to limit opportunities for an effective big man. At this point, Cameron Ridley has seen it all. He has seen collapsed zone defense (Baylor and Oklahoma State), fronting to deny entry passes (Oklahoma), hard double teams after he catches the ball (Iowa State), and one-on-one defense by a future NBA lottery pick (Kansas). He is going to continue to see defenses focused on stopping him. And those defenses will continue to at least be somewhat effective so long as Ridley's teammates don't make opponents pay.

Against Oklahoma, Texas thoroughly dominated the area in front of the rim at both ends of the floor. Texas was 19-28 at the rim, while the Sooners went 6-14. It was a huge advantage inside for Texas.

But sometimes, a huge advantage inside isn't enough. Sometimes, it isn't even close to enough.