A Statistical Recap of the 2014 Longhorns Basketball Season: The Texas Offense

A look at the strengths and weaknesses of the Longhorn offense.

Share All sharing options for: A Statistical Recap of the 2014 Longhorns Basketball Season: The Texas Offense

On Saturday March 22, the Texas basketball season came to a quick end. Since that time, I have taken a bit of time to reflect upon the season, thinking about what went well, and what didn't go well, for Rick Barnes' team. Last week, I took a look at how the Longhorns did relative to preseason expectations. This week, we will set expectations aside, and examine in detail how the Horns did on both ends of the floor.

At the end of last season, I did some work comparing Texas' offense and defense to the other teams in the Big 12. My goal is to do essentially the same thing this year, drawing attention to team strengths and weaknesses. This article will focus on offense, while an upcoming piece will look at the defense.

The most direct way to benchmark a basketball team is how it performs during conference play, relative to the other teams in its conference. During the non-conference season, the quality of competition varies a great deal from team to team and game to game. Teams play non-conference schedules with substantial differences in difficulty, making comparative evaluations hard. Adjusted stats help, but only up to a point. During the conference season a natural frame of reference for comparing teams within the conference emerges. This is particularly true in a league like the Big 12 that plays a true round robin schedule.

Waterfall charts. One of my favorite ways to illustrate how a team does on offense and defense it to create point per possession waterfall charts. The goal of this analysis is to compare the points per possession scored or allowed by the Texas offense or the Texas defense in Big 12 games with the Big 12 average. I then look at seven different statistical categories, and estimate how much each category contributes either positively or negatively to the points per possession scored or allowed by Texas when compared with the league average. These seven categories are:

2FG%: The field goal percentage of a team on two point shot attempts.

3FG%: The field goal percentage of a team on three point shot attempts.

FT%: The percentage of free throw attempts that a team makes.

3FGA/FGA: The fraction of shots attempted from three point range.

ORB%: The percentage of total rebounds pulled down by the offense.

TO%: The percentage of possessions that end in a turnover.

I then take this information and build a waterfall chart, which starts from the league average point per possession total on the left hand side, and then steps up or down according to the results in each statistical category, arriving on Texas' offensive or defensive points per possession total on the right. I have explained the math behind this method in the past in greater detail. 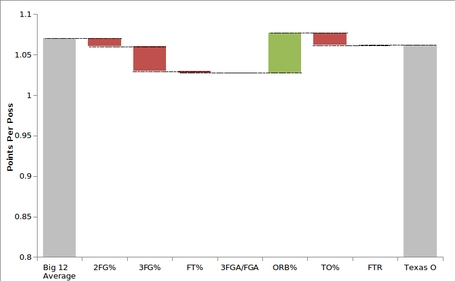 Notes on each category:

2FG%: Overall, this is an area of weakness for Texas. The Texas Longhorns connected on 47 percent of their two point attempts this season, a percentage point below the conference average. This below average performance is partly due to the sorts of two point shots Texas is prone to get in its offense. Over the entire season, approximately 53 percent of Texas' two point attempts were logged in the play-by-play data as jump shots, compared with a D-I average of about 45 percent. Texas' shooting percentages at the rim and on two point jump shots were essentially identical to the D-I averages of 60 percent and 36 percent, respectively.

There are only two ways to improve shooting percentages: make more of the shots that you take, and take better shots. Texas certainly has room to grow in both categories, but there is more room to improve in the shot quality category. When we look for places for the Texas offense to improve, shooting fewer long twos is probably where I would start.

When it comes to shooting mid-range attempts, Texas guards Javan Felix and Isaiah Taylor were the worst offenders. Both Felix and Taylor connected on just under 35 percent of their two point jumpers, which is right in line with what college basketball players typically shoot in games. But the problem isn't the shooting percentages; the problem is the number of these sorts of shots that these players took. 40 percent of Felix's shots were two point jumpers, while 61 percent of Taylor's shots were two point attempts not taken near the rim. Making matters worse, these shots were often taken off the dribble -- the worst sort of shot that a player can take. Only 19 percent of Felix's made two point jumpers were assisted, which indicates that the majority of his two point attempts were of the pull-up variety.

Now, this doesn't mean that I think that no one should ever attempt a mid-range shot. At the college level, there are a very small percentage of players who make these shots often enough to make it less of a problem. Texas has one of these players, in Jonathan Holmes, who this season connected on 45 percent of his two point jump shots. Interestingly, 69 percent of Holmes' made two point jump shots were assisted, meaning that Holmes' mid-range attempts were often better catch-and-shoot attempts.

Still, if we are searching for a way to improve an offense, I would advise starting with the approach that coaches like Fred Hoiberg have taken, and work to minimize (or at least reduce) the number of mid-range shots taken.

3FG%: This is a significant area of weakness for the Longhorns. Texas made 30.3 percent of its three point shots during conference play this season, which ranked last in the Big 12. On the season as a whole, the Longhorns shot 32.7 percent from three point range. None of Barnes' players connected on greater than 36 percent of their attempts over the course of the season.

FT%: During Big 12 play, the Longhorns connected on 70 percent of their free throws, just slightly below the conference average of 71 percent. Free throw shooting wasn't an area of weakness for Texas this season. Most notably, Cameron Ridley improved his free throw shooting percentage from an awful 33 percent last season to a decent 63 percent this year. Additionally, freshman Isaiah Taylor connected on 75 percent of his shots from the line. Ridley and Taylor combined to shoot 400 of the Longhorns' 909 free throw attempts. Taylor and Ridley free throws will remain a major part of the Texas attack in the coming years.

3FGA/FGA: Texas shoots very few three point attempts, with 27 percent of its FGAs coming from beyond the arc during conference play, which was the lowest rate in the league. Because Texas shot threes so poorly, this low rate didn't directly hurt the Longhorn offense.

ORB%: Offensive rebounding is the thing that the Texas Longhorns do best. Compared with a season ago, the greatest source of offensive improvement for Texas came on the glass. Texas led the Big 12 with a 41 percent offensive rebounding percentage, and finished in the top 10 nationally in this category. These extra shots help the Texas offense -- when you struggle to make the shots that you take, the best way to raise the score is by taking more shots.

Interestingly, not only does Texas earn extra shots with offensive rebounds, but frequently these are the best sorts of shots that Texas takes. Beat writer Mike Finger occasionally joked on Twitter about Texas' missed-shot-and-rebound offense, but it was as much insight as a joke. Based on the numbers in my database, Texas finished tied for fourth in the country for the total percentage of shot attempts that were putbacks of offensive rebounds(*). 9.1 percent of Longhorn shots were quick putbacks of offensive rebounds, and Texas' effective field goal percentage on these shots was 62 percent (compared with a total effective field goal percentage of 47 percent). In case you are curious, Kentucky led the nation with 10 percent of its shots coming as offensive rebound putbacks.

Cameron Ridley led the way for Texas with 66 of his 246 shot attempts coming off of the offensive glass. This tied him for the second highest number of putback shots in D-I. One in four of Ridley's shot attempts were putbacks of a teammate's miss.

TO%: Rick Barnes' squad turned the ball over at a slightly higher rate (18 percent of possessions) than the fairly low 17 percent turnover rate averaged by the Big 12. So while this shows as a "weakness" in the plot above, it is probably an area of moderate strength for Texas, when we look at major conference college hoops. The Texas offense certainly wasn't undermined by its high turnover rate the way that it was a season ago. Both Isaiah Taylor and Javan Felix (particularly Felix) did a solid job of taking care of the ball.

As a freshman, Felix was extremely shaky with the ball. As a sophomore, he cut his turnover rate in half, becoming one of the steadiest guards in the conference when it came to protecting the rock.

FTR: While free throw rate can matter a lot in an individual game, it tends to have at most a small effect on full season numbers. Texas is no exception; the Longhorns drew about as many fouls as everyone else in the league did.

In the next instalment of this series, I will take a similar look at the Texas defense.