A Statistical Recap of the 2014 Longhorns Basketball Season: The Texas Defense

Measuring the Texas defense against its Big 12 opponents, we learn what it does well, and where it could improve.

Share All sharing options for: A Statistical Recap of the 2014 Longhorns Basketball Season: The Texas Defense

Yesterday, I took a look at the Texas offense using waterfall charts, comparing it with the rest of the Big 12. Today I take a similar look at the defense, before describing some of the key areas of improvement for Texas on both ends of the floor. 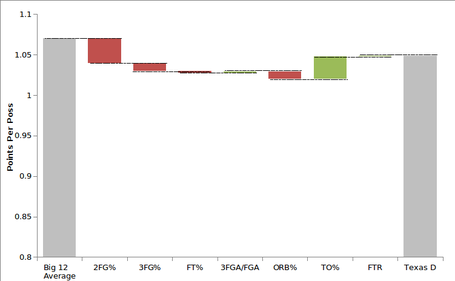 2FG%: The heart of what makes the Texas defense good is its ability to lower opponent two point field goal percentage. The Longhorns finished second in the Big 12, and 11th nationally, in this category. Rick Barnes' team did this by being exceptional at two things:

Among the seven statistics that I am using in this article, two point field goal percentage is perhaps the most important. Nothing else can have as big of an effect on total defensive efficiency. For evidence that it is important to be good at this, a rather significant part of Kansas' dominance over the last decade has been that the Jayhawks have led the Big 12 in two point field goal percentage defense in eight out of the last ten seasons. Or consider that four out of the last seven national title winners -- including Connecticut this year -- have ranked in the top ten nationally in this category. You have to go all the way back to the 2007 Florida Gators to find a champion that didn't rank in the top 50 in two point field goal percentage defense, the only such title winner in the last ten years.

3FG%: Early in the season, the Texas Longhorns were giving up entirely too many open three pointers. But during conference play, this wasn't an issue, as opponents made 33 percent from beyond the arc, a total that was below league average. There is a lot of randomness involved in three point shooting percentages, particularly defensive three point shooting percentages, so I don't want to make too much of this number.

3FGA/FGA: One of the consequences of plugging up the lane on defense (either in man-to-man or zone) is that you will give up a few more three point attempts. In league play Texas opponents took 35 percent of their attempts from long range. This isn't different enough from the league average of 33 percent to make much difference.

Opponent ORB%: Last season, defensive rebounding was a weakness for Texas. This year it was a strength. Cameron Ridley, Jonathan Holmes, and Connor Lammert all improved their defensive rebounding, while perimeter players like Demarcus Holland, Isaiah Taylor, Kendal Yancy, and Martez Walker all went to the defensive glass. There was no excuse for a team with as much size as Texas to be as bad as it was last season on the defensive boards. This season there were no reasons to make excuses, as Texas took care of business.

TO%: This is the greatest area of weakness for the Texas defense. In a league where turnovers were rare, turnovers against the Longhorn D were particularly scarce. During conference play, Longhorn opponents turned the ball over in fewer than 15 percent of possessions, the lowest rate in the Big 12. This is another consequence of playing such a compact defense.

It is certainly possible to have an effective defense without forcing a bunch of turnovers -- Final Four teams like Wisconsin and Kentucky this season come to mind -- but it does mean that you have to make this shortcoming up in a different category. In Texas' case, the turnover rate was so low that it was going to be very hard to make up for it entirely, even when the Texas defense did everything else at a high level.

A modest improvement in forcing turnovers next season provides the most significant way to improve the Texas defense.

FTR: While the last couple Texas teams have struggled to defend without fouling, this season's version did not. Texas was right around average in opponent free throw rate.

What are the key areas for improvement for the Texas Longhorns?

For the Texas offense, improvement could potentially come in three separate areas:

For the defense, the greatest area for improvement would be to force one or two extra turnovers per game. This would help the Longhorns improve an already strong defense to become one of the best in the conference (and country).

The future for Texas Longhorns hoops looks reasonably bright -- with or without Myles Turner -- as over the next two seasons Rick Barnes' squad will shift from a young team to an experienced group. Recent college hoops history shows (and frankly we should already know) that experience is really important; a 21-year old typically is better than all but the very best 18-year olds.

So many of the needed improvements for Texas can and should come with time, as the players currently in the program develop and mature.