Big 12 Basketball: What is wrong with TCU?

The first in our series on the basketball teams of the Big 12 looks at the Horned Frogs.

Share All sharing options for: Big 12 Basketball: What is wrong with TCU?

When TCU agreed to join the Big 12 a little more than two years ago, it wasn't a surprise. The Big 12 needed new members after the defections of Nebraska, Colorado, Texas A&M, and Missouri, and TCU was eager to join many of its former Southwest Conference rivals. On the football field, the Horned Frogs were thriving, and were ready to take on tougher competition after rattling off a string of double digit win seasons. TCU's transition was even the rare realignment move that made geographic sense.

The TCU basketball program came along for the ride. It was dumped, helplessly, into a pool of sharks -- wearing a life vest made of stitched-together bratwurst. The Mountain West had been a tough league, regularly sending multiple teams to the NCAA tournament, but the Big 12 was a different matter entirely. TCU hadn't exactly thrived in the MWC, either, going 6-10, 5-11, 5-11, 1-15, and 7-7 in its final five seasons there. The Frogs were about to be eaten alive.

Since joining, TCU has won exactly two games in the Big 12. That is a record that includes a 0-18 season in 2014. It hasn't been pretty. Trent Johnson's squad has just be over-matched. According to the ratings available at Kenpom.com, every other team in the Big 12 last season finished as one of the 100 best in Division-I. TCU ended up No. 234.

At least part of the reason that the Frogs had so much trouble last season is due to the fact that they were one of America's youngest teams. While point guard Kyan Anderson led the team in minutes as a junior, freshmen Karviar Shepherd and Brandon Parrish ranked two and three, respectively. This was partly out of necessity; poor Amric Fields struggled through multiple injuries and appeared only in 18 games after missing all but three the previous year, while 6-8 Devonta Abron missed the entire year with an injury.

While the young guys took their lumps, there is some hope here. Shepherd has a chance to be an impact player in the conference. The 6-10 center showed potential during the year, although he struggled to finish around the rim, converting on 51 percent of his layups and dunks. That isn't a strong number, particularly for a big guy. But it is somewhat understandable for a 225 lb freshman center to struggle finishing against stronger and more mature opponents.

Unfortunately, struggling on the offensive end didn't set Shepherd apart from his teammates.

The TCU offense is broken

Before I detail all the terrible things about the Frog O, I need to cover one non-terrible thing. Kyan Anderson is a terrific basketball player. He is an outstanding shooter who hit 40 percent of his threes last season. He attacks the rim well in transition, and he knows how to get to the free throw line (where he made 85 percent of his attempts last season).  He does this all while taking decent care of the ball and setting up his teammates. He would have gotten more recognition last season if TCU basketball hadn't been total garbage.

But TCU was garbage, particularly on offense. Aside from shooting free throws, and being a bit above average when it comes to avoiding turnovers, the TCU offense did nothing else well. As a result, the Frogs finished the 2013-2014 season scoring only 0.95 points per possession. During conference play things were even worse, as coach Johnson's team managed less than 0.90 points per trip, which was last in the league by a sizeable margin. (TCU also had the Big 12's worst defense.)

One of my favorite ways to create a quick snapshot of an offense or a defense is to make a waterfall chart. I like this approach, because it immediately highlights a team's strengths and weaknesses. In making a waterfall chart, we start from some baseline value on the left hand side. In the chart below, this baseline value is the number of points per possession scored by a hypothetical team that averages the NCAA median in all seven statistical categories that appear in the chart. Such a team scores just about 1.04 points per possession. 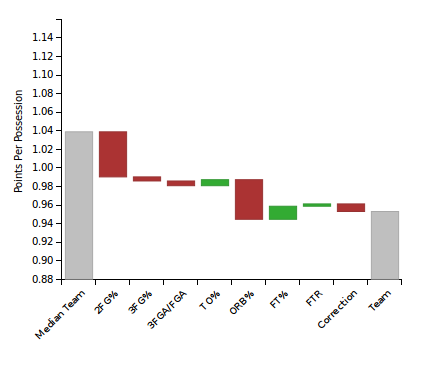 As we move from left to right on the waterfall chart, we add or subtract the contribution of each statistic from this baseline value, until we finally end at the grey bar on the right of the chart, which illustrates how many points per trip TCU scored. Big red bars show us things that reduced a team's scoring efficiency, while big green bars show us the things that increased that efficiency.

For example, TCU shot 43 percent on two point jump shots, which made the Frogs about 0.05 points per possession worse than the median NCAA team that shoots 49 percent on two point attempts. While 0.05 points per possession seems like a small number, it is not; over the course of a 66 possession game TCU was a bit more than 3 points worse than average based on this single statistical category alone.

The poor performance of TCU from two point range is largely due to a team-wide problem converting on shots near the basket. In Division I, around 61 percent of shots that are logged as either layups or dunks in play-by-play data go in. For TCU, the shooting percentage on these attempts was 54 percent. The only Horned Frog regular who converted greater than 60 percent of his attempts from near the hoop was Amric Fields (67%). Second on the team was the 5-11 Anderson, with 57 percent. (This is a respectable number for a player this size; getting so many transition layups helps.)


Where did the offensive rebounds go?

A surprising weakness of TCU during the 2013-2014 season was that the Frogs got to fewer than 25 percent of their own misses, one of the worst rates in Division I. I have no idea what was going on here; Trent Johnson's teams have typically done well on the offensive glass.

Some teams don't get to many offensive rebounds because they have been coached to get back on defense after a missed shot. While this would be inconsistent with Trent Johnson's history as a coach, I went back to review game footage of the Horned Frogs during the 2013-2014 season just to make sure. I did not see a team that was dropping four or five guys back defensively after shots very often. I just saw a team that, for the most part, wasn't able to get to the offensive glass.

For example, in the screen shot below, taken from TCU's Feb. 12 game versus Baylor, we see the positioning of players just after a TCU three point attempt from the wing. Three Frogs are crashing the glass. (Baylor will come away with the rebound.) Sending three players to the glass after a three point attempt is not a tactic taken by a team that is conceding offensive rebounds in exchange for a head start on transition defense. TCU was trying to get this rebound; it just could not. 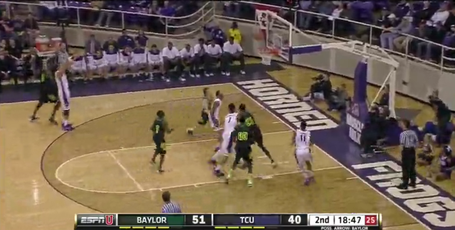 The good news is, things can hardly get worse

Shepherd and Parrish will be sophomore next season, meaning they will almost certainly improve. If Shepherd can increase his effectiveness near the basket and a Parrish threes find the bottom of the net more consistently -- and if both players become a little more active on the offensive glass -- it will be a significant boost for Trent Johnson's team.

Perhaps more importantly, the Frogs would benefit from better luck avoiding injuries. Amric Fields and Devonta Abron have both missed considerable time, with Fields missing the better part of the last two seasons, and Abron sitting out the entire 2013-2014 campaign. Both are athletic front court players. Abron in particular is a sure cure for TCU's offensive rebounding deficiency, while two seasons ago the talented Fields was TCU's best player.

Another potential chance to improve is with the eligibility of transfer of Trey Zeigler. Zeigler played two years at Central Michigan for his father, and then a year at Pitt after his dad was fired. He gives TCU a perimeter player who is a good playmaker and a strong finisher around the basket. The knock on Zeigler is that he cannot shoot at all.

It will be interesting to see how Zeigler pairs with the talented Anderson (who can shoot). Zeigler dominated the ball when he played at Central Michigan -- where the term "volume scorer" definitely applied -- while he had little impact in a secondary role at Pitt. It probably doesn't make sense for Zeigler to play with the ball all the time in the same backcourt as the much more efficient Anderson. This will be something to watch.

TCU also brings in a freshman class that includes prolific high school scorer Chauncey Collins. This kid filled it up as a teenager, as he demonstrated by dropping 58 points in the homeschool national championship game. (Make snide remarks about the level of competition if you like, but there was another D-I player on the floor during that game, so that is at least something.) It is not clear what sort of impact Collins will have as a freshman, with older players like Anderson and Zeigler in front of him.

With a few more credible D-I players in the mix, the talent gap between TCU and the rest of the Big 12 will still be significant, but it will at least be smaller next season. Johnson's team will likely start rebounding again, and will probably be at least decent on D. Give this, it is hard to imagine that the Frogs will again go winless in conference play, although winning more than five games feels like a real stretch.