Last season's home loss to Texas Tech hurt. It hurt in a way that most fan bases can't understand. Sure the home unbeaten streak came to a halt. But for the team and insiders, the loss of rising running back Dominique Whaley to a broken ankle hurt much worse.

The next week's opponent was Kansas State. Their hall of fame coach had them back in the national conversation as the Wildcats were a surprising 7-0 heading into the showdown in Manhattan, KS. KSU was full of piss and vinegar as it appeared the top of the Big 12 ticket was ripe for the taking.

But they don't call him ITALICS Big Game Bob for nothing. His incredible ability to quickly amp his team after conference game defeats is legendary. Even during what outsiders describe as his down year in 2009, Stoops' Sooners offset a tough late season 3-10 loss to eventual Big 12 north division winners Nebraska in Lincoln with a home thrashing over the fighting Texas A&M Aggies 65-10. To date, his streak of not losing back-to-back Big 12 conference games is still in tack.

The 2011 OU season was marred with many headliner injuries. The injury to Dom Whaley mentioned earlier and the blown knee injury later in the season to the gifted All-World wide out Ryan Broyles top the chart.

But getting ready for the showdown with Kansas State, and ultimately prevailing in that game, is something that is often overshadowed in his storied career. Because facing an undefeated foe requires on-your-feet thinking and chutzpah. Out of this potential disaster came a scheme, and a player to run it, that met the mild-mannered coach in Manhattan mano-a-mano.

Blake Bell was a highly rated pro-style quarterback recruit from Wichita Bishop Carroll. It has been posited he was one of the most highly, if not at the top, sought after high school recruits in Kansas football history. His massive 6-6, 245 lb frame is but one of his natural attributes drawing coach's attention both far and wide. But it was his production on the gridiron that shined brightest. And for Bob Stoops this was a big need as a back-up, and ultimate replacement, for his gifted young up and coming quarterback Landry Jones.

Faced with a questionable short yardage option against a KSU defense that was proving stout heading into the game in that category, the Stoops led coaching staff devised a power attack that took a yet unproven commodity in Blake Bell and turned him into a fan favorite...

That game in Manhattan is probably remembered more for Landry's 5 passing TD performance plus the gaudy statistics (37-50-2 for 520 yards) than for Blake Bell's lone touchdown. But make no mistake, the one yard plunge in the first quarter for the game's first score whetted the appetite of a team, and its fans, for more of the power running Blake offered.

He went on to record 12 more touchdown runs last season with a high mark of four in the heartbreaking last second loss in Waco to a Heisman led Baylor squad. His non-kicking season scoring production in only 7 games led the team at 78 points (11.1/game) and even beat out Broyles scoring output, who led the team in points production the previous season, by almost 3 TD's and he played in 2 fewer games.

While Oklahoma did not finish as strong as hoped, it was finding a new short yardage and red zone monster in Bell that was a big highlight heading into the 2012 season which had OU as the odds on favorite given the number of returning starters to win the Big 12 crown.

Fast forward to a fall camp littered with offseason player churn, coaching changes, and locker room morale issues, OU is just now finding its legs after an impressive win against Texas Tech last Saturday. And while Blake Bell has not been as big a part of the OU scheme season to date (attempts per game are 2.25 fewer per game this season and trails Damien Williams by 2 touchdowns), his touchdown in the 3rd quarter against KSU in Norman gave the Sooners the lead for the first time in that game after a game defining fumble on the KSU goal line earlier in the game that had OU punched in would have been the difference in the final outcome. Regardless, he has proven a difference maker to keep their offense on the field and out front and it will be interesting moving forward how Stoops, and offensive co-coordinator Huepel, work to distribute the ball now that they have a stable backfield in which to work with.

Last season the power alignment for the BELLDOZER was mainly a static set with a lone wide out as a pass option. He only threw 4 times all season completing a single pass and tossing an interception among the other three. Stoops has provided Blake with a few more passing chances this season but most came against the blowout win of Florida A&M (how in the heck did they wind up on their schedule anyway?).

Huepel would primarily run Blake between the tackles or just off tackle behind the big blocking backfield duo of fullbacks Trey Millard (6-2, 256) and Aaron Ripkowski (6-1, 260). The blocking variations could be run straight or across the formation. Seldom was it stopped. Blake scored a whopping four touchdowns against Baylor and probably would have run for a 5th had he not handed the ball to Trey Millard (Frame 2). 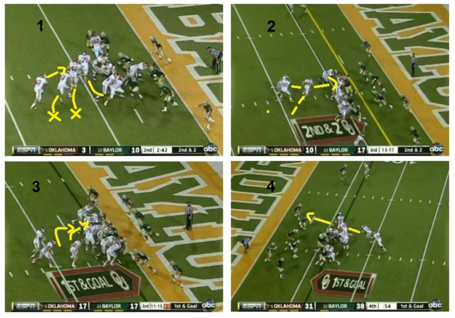 Huepel has added another interesting formation twist in this season's version of the BELLDOZER to include wide out pre-snap motion and interesting placement of the blocking fullbacks.

Below are frame sequences showing a 3rd and short yardage against Texas Tech in Lubbock this past Saturday on OU's first drive of the ball game.

Unlike last season where most of the power plays aligned Blake's blocking backs to one side of the formation, here we see the backs aligned on each side with the wide out in motion across the formation. The snap is timed to allow Blake an option handoff to the fly-sweeper, keep the ball for delay quarterback draw, or an option off draw to pass downfield to the streaking wide out.

The added fly-sweep option presents a unique challenge for a defense in keeping the edge covered as well as tackle-to-tackle run fits. It is also a challenge if, and when, the OU offensive staff decide to use Blake as bait and pull the trigger on a vertical pass in a critical down, distance, scoring scenario should that situation arise. The options with this dual threat capability will keep opposing defensive coordinators strung out on caffeine under their desks in preparing a game plan against the Sooners.

It is worth noting that entering this years Red River Rivalry game against the 11th ranked Sooners the youthful Longhorns defense will have its hands full keeping Landry Jones in check as well as the short yardage power game. If the Texas Longhorns are unable to thwart the OU short yardage attack and get off the field, it could make for a very long day for the burnt orange and a quick exit to Fletcher's for a corny dog and a few beers. And while it certainly would help, the Longhorns should not be expecting Big Tex to lend a hand in defending against BELLDOZER.