With Texas fans on Twitter, there is only one story this week.

so, lemme run a search for "mack brown #hookem." i imagine there are some doozies.

That is my gig, Bomani, although I would gladly pass it off this week. I was dreading the tweets generated during last Saturday's Texas / OU game. It is essentially the angriest collection of words that I have ever complied. My computer (pictured below) ran extra long just processing all of the hate. 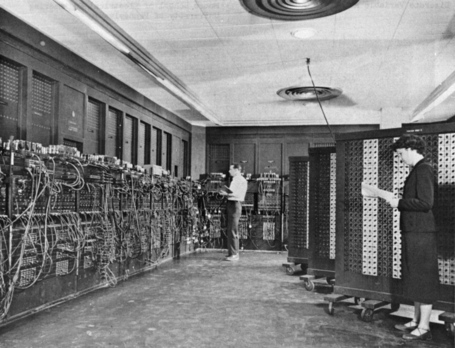 There is really only one story this week. It makes no sense to take the game blow by blow, and see what prompted various tweeting patterns. There is only one pattern that matters. Below I plot the negativity index (a counter of tweets containing words generally related to negative opinions), along with the number of tweets mentioning the word "Mack" during Saturday's game. 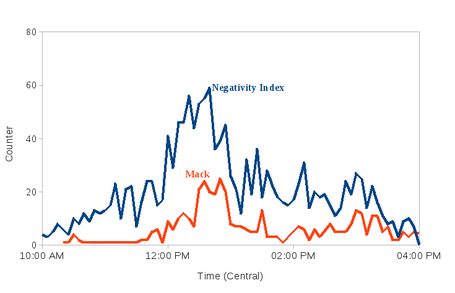 I have found that people haven't been tweeting about Mack Brown very much during Texas games. Usually only a handful of tweets mention the coach, with most of the chatter focused on the action on the field. That apparently changes in a blow out. Fans don't really talk about their coach much during the good times. But when things turn ugly, the coach is front and center. This week there were 412 tweets captured in my searching that contained the word "Mack." The tweeting traffic about the Texas coach picked up right before half-time, as the TV cameras focused on Brown making notes on a piece of paper.

Mack is doing a crossword on the sideline...Hopefully he is thinking of what his letter of resignation will be like.#Horns

This is wrong, by the way. It was a Sudoku puzzle, and it was a hard one.

In the burst of tweets around half-time that referenced Brown, I found terms such as: "third-straight," "resignation," "resign," "replace," "pitiful," "pathetic," "disappointing," and "Fulmer." Wait, back up. Fulmer?

To be honest, I am sort of at a loss as to how to wade through this morass of anger, and turn it into a story. So instead of even trying, here is a selection of tweets from this Saturday.

I really like this first one, as it compresses so much unhinged rage and sarcasm into such a small number of words. Its anger is directed at the Texas program, but the joke is really on us and the way that we react to these sorts of losses. It is a great use of the medium of Twitter.

Many people noted Brown's distress on the sidelines.

While it may be a bit premature for this next tweet, I think most of us are probably thinking about it.

And then there is this one. If we are coming to the end of the line with Mack Brown, let's at least try to remember some of the good times.

#Longhorns Sorry, Mack, it was a fine romance but now it's over.

Finally, I leave you with this exchange between two Twitter users that turned up in my searches.