Sometimes it is about more than just football.

As someone who writes on the Internet, you dream about something like this. Texas beat Baylor 56-50. Whatever. Natalie Freaking Portman was at the game. Why does that have me excited? Because, my friends, Natalie Portman is search engine optimization gold. Of course, by the time this post runs, there will probably already be 17 Bleacher Report slide shows finely tuned for Google searches on "Natalie Portman Texas Longhorns football." But screw them, I can play this game, too.

NATALIE PORTMAN IS RIGHT ABOVE ME AHHHH #hookem #texasfootball

This was the first tweet about Portman in my database, which was sent at 8:15 PM central time. Over the next hour or so, a handful of people spotted her at the game. And then at around 9:45 PM, there was a huge spike in traffic discussing Portman, as she had worked her way down to the Texas sideline, eventually ending up on the Godzillatron. These tweets were, for the most part, less creepy than you would think. The most heavily retweeted Portman tweet was probably this one.

Natalie Portman is a smart woman! She loves the Longhorns too! twitter.com/TexasSTC/statu…

Disappointingly, there were no Matthew Mcconaughey / Wooderson jokes tweeted during this time. Missed opportunities, people. The biggest question about Portman that I have based on these photos that are circulating from last night's game is this: why were the Ghostbusters also hanging out on the sideline during the game?

Overall this week, the tweeting volume was down, with 9700 tweets captured by my search, compared with 30500 last week. 500 of this week's tweets were about Natalie Portman, which is roughly five percent of the tweets captured.

Prior to the start of the game, my wife and I found ourselves watching the Ohio Lottery game show Cash Explosion, which is a beautiful and pointless mess. It is essentially the same game as Press Your Luck, without any of the interesting elements(*). But you don't watch this show for the game, which is stupid, but for the contestants. If this program were broadcast nationally, Americans would be horrified by the idea that these are the people who will likely end up selecting the next president of the United States.

(* You are probably wondering, what were the interesting elements of Press Your Luck? Well, there were the Whammies, and then there was Michael Larson, the man who cracked the Press Your Luck code and won over $100,000 in the process. That is it.)

I could tailgate in my front yard and it would probably be closer than some people's spots. #hookem

The graph below illustrates the Twitter activity during the Texas game. There isn't much going on with the negativity index this week, which suggests that Texas fans are starting to come to terms with their defense. 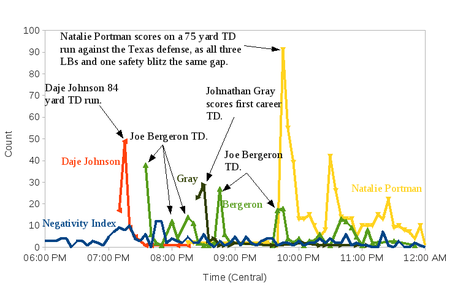 Daje Johnson TD!So thats what its like to get him more touches, eh? #hookem

The Johnson touchdown was fast -- so fast that it would have been easy to miss, as this tweet indicates.

Joe Bergeron repeatedly found the end zone on Saturday night. I captured 247 tweets containing the word "Bergeron." When looking through the file of tweets with this keyword, the touchdowns start to run together. Perhaps the most clever tweet following a Bergeron touchdown was this one.

Another highlight was freshman running back Johnathan Gray scoring his first touchdown.

A funny side note was a screen capture of Mack Brown's half time interview that circulated on Twitter. I imagine that this more or less sums up the way that Brown feels after the last week.

Mack Brown with the photo of the weekend. For you, America. bit.ly/RhX788

But, as far as Twitter was concerned, the football was almost secondary. This was Natalie Portman night at DKR. Given that, I leave you with this final thought, which nicely sums up the situation.

#texas gets Natalie portman.#Aggies get the little fat kid from Modern Family. #hookem