Texas fans turn on David Ash, and like the cut of that McCoy kid's jib.

Share All sharing options for: Texas Longhorns Football Twitter Recap: Texas vs. Kansas, and the Mystery Cult of Case McCoy

In many ways, Texas Longhorns fans are like a pack of angry wolves, who in times of crisis will eat their own. This Saturday, Texas fans feasted on tasty morsels of quarterback David Ash.

good god, and to think I ever had positive thoughts about David Ash. #longhorns

People on Twitter love Case McCoy. The Cult of Case -- forced into hiding by last season's Baylor game -- was out in public again, squinting as their eyes adjusted to the bright light. If Twitter users were running this team, Case McCoy would be the new starting quarterback. Of course, if Twitter users were running the team, Mack Brown, Manny Diaz, Brian Harsin, and Deloss Dodds would all be fired; Major Applewhite would have coached the team for a week before he too was probably fired; Daje Johnson, D.J. Monroe, and Marquise Goodwin would each touch the ball on every play (the double reverse offense); and Anthony Fera would be subjected to unspeakable acts of violence. (Seriously, some people on Twitter are mentally ill. I get to read what they write. Good times.)

To be fair, Ash scored on his first drive too. Just sayin. #HOOKEM

There is more on Ash and McCoy below. But first, let's take a look at the overall flow of Twitter traffic during the game.

This week, my search collected 8400 tweets, down from 9700 last week. The plot below summarizes some of the Twitter activity during the game. The negativity index is plotted along with the number of tweets mentioning Joe Bergeron, David Ash, and Marquise Goodwin. The number of tweets mentioning Case McCoy is so much greater than everything else that I had to rescale the McCoy line to fit it in the plot below. The purple line shows the number of Case McCoy tweets, divided by four. 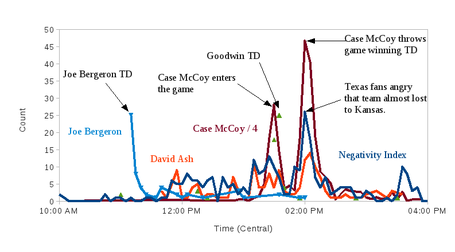 Texas scored easily on its first drive. During this time, the negativity index was relatively low, as an easy first score fit well with what Texas fans were expecting. But after that initial drive, Texas struggled to move the ball, and the negativity index started to register meaningful results a little before noon central time. About an hour later, there was a modest jump in tweets about Ash, and a corresponding jump in the negativity index, during Ash's last series of the game, which ended with an interception.

When Case McCoy entered the game, there was a spike in Twitter traffic about the backup Texas quarterback. The biggest spike came at the end of the game, when McCoy led Texas on a game winning drive after nearly honking the series with an interception. This drive neatly captured just what it is like to ride on the Case McCoy emotional roller coaster.

There was also a spike in the negativity index at the end of the game. This appears to be due to Texas fans lamenting the fact that the Longhorns had just nearly lost to Kansas.

The biggest spike in tweets with the keyword "Ash" came right after the game ended. Additionally, there were 1000 tweets over the six hour time period I monitored that included the word "McCoy," which was about 12 percent of all of the tweets captured by my search. Here is a selection of the many tweets discussing the Texas quarterback situation.

We're about to see the end of the Ash era for the Longhorns. Coming soon, another McCoy under center.

Hopefully Mack's not giving up on David Ash too soon.... #HookEm

Although I refuse to be excited about a comeback win over Kansas I am excited for Case McCoy at Texas. Never was an Ash fan #HookEm

Case was clutch on that final drive, but I'd still rather have David Ash starting. But that's just me. #Longhorns

Now, please, someone, tell me that Case McCoy shouldn't be the starter of the Texas Longhorns, I dare you.

While I have tried to highlight some of the pro-Ash tweets here along with the pro-McCoy tweets, I don't want to give the wrong impression. The support for McCoy to become the starting quarterback significantly outnumbers the support for Ash on Twitter. And to me, it highlights some of the things that are unique about the way that we view the quarterback position, compared with other positions in sports. If David Ash were a running back, or a baseball pitcher, taking him out of a game where he was struggling and putting in a replacement wouldn't be a big deal. But when it happens to a quarterback, apparently we as fans view it as an existential crisis.

It doesn't have to be this way. We do not have to engineer a knee-jerk quarterback crisis every time Ash or McCoy plays poorly. We may be wired to do this, but we can change our wiring. We choose to manufacture what ultimately ends up being a dull debate. If McCoy does become the starter, a week or two from now when he inevitably struggles to live up to the high standards of what is expected of a Texas quarterback, we will get to do this all over again. Please, make it stop.

There is another way.

I like both Ash AND McCoy. If they can use em both to win games, that's what it's all about! Every player contributes. #Longhorns #HookEm