Manny Diaz is struggling in large part because of the way he's using Texas' linebackers.

There were some very good things to take away from Saturday night's game -- on both sides of the ball -- and I really am going to talk about them, but while I continue to work on that post I wanted to follow up on the frustration I expressed about Manny Diaz and the way he continues to shoot us in the foot.

Without question, the loss of Jordan Hicks has put Diaz in a tough situation, but that's football -- you've got to be able to develop a successful strategy for the assets you have. Moreover, personnel deficiencies are only half the story here... a fundamental part of the problem relates to what Manny Diaz is directing his players to do.

That's the focus of this edition of Snap Shots, which provides a frame-by-frame look at one of Andrew Buie's eight rushes that went for 14 or more yards. When 8 of your 31 carries go for 14+ and net you 169 yards, you're running through some big holes in the defense. Let's take a look at one of them. 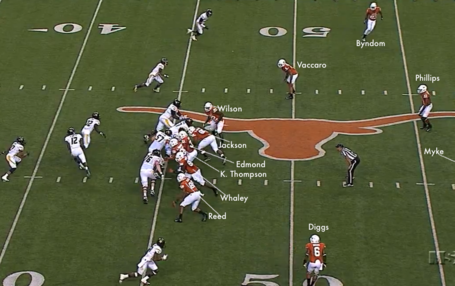 Comment: This is one of the run blitzes out of our base nickel package (4 down linemen, 2 linebackers, 5 defensive backs) that's exasperating some of us right now. Cedric Reed and Reggie Wilson are in at defensive end, flanking Chris Whaley and Des Jackson on the interior. Sandwiched between Whaley and Jackson? Texas' two linebackers, Kendall Thompson and Steve Edmond, who at the snap of the ball are run blitzing the A- and B-gaps. 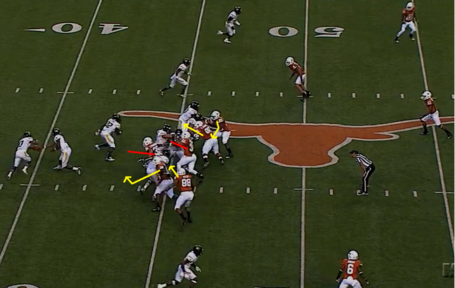 Comment: As Smith gets ready to hand the ball to Buie in the backfield, the red lines indicate where Edmond and Thompson are run blitzing up the middle, while the yellow lines illustrate one of the "twists" that Manny Diaz is so fond of using. On the bottom of the picture, Chris Whaley is stunting into the C-gap, while Cedric Reed (#88) completes the twist by slanting into the B-gap after Whaley passes by. At the top of the screen, Des Jackson is slanting outside while Reggie Wilson starts to slide behind him towards the inside. 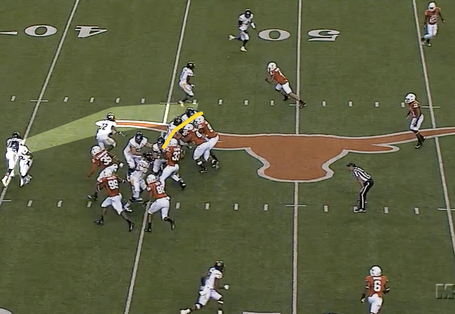 Comment: As Buie receives the handoff and takes his first step, Texas' problem is already crystal clear. West Virginia has walled off the playside, with an assist from Texas' run blitzing and twisting, which made the task ridiculously easy. 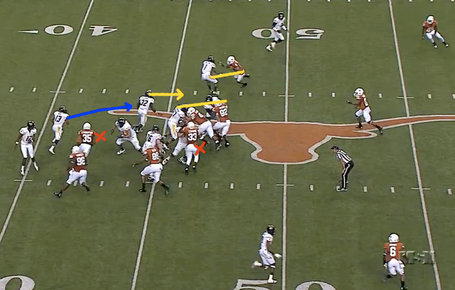 Comment: One step later, you can see even more clearly how and why West Virginia is set up for success. The red X's mark Texas' two run blitzing linebackers, neither of whom is in any position to make a play on Buie. 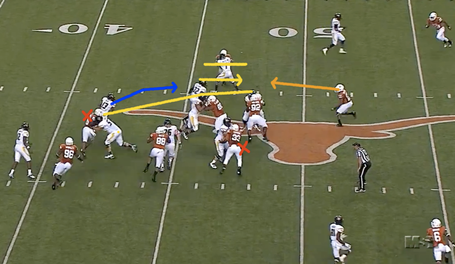 Comment: With Thompson trailing Buie, Reggie Wilson completely turned inside, Des Jackson struggling to get outside leverage, and Kenny Vacarro completely walled off on the outside, Texas' only hope is that Adrian Phillips somehow beats the lead blocker that's charging through the hole to clear him out. 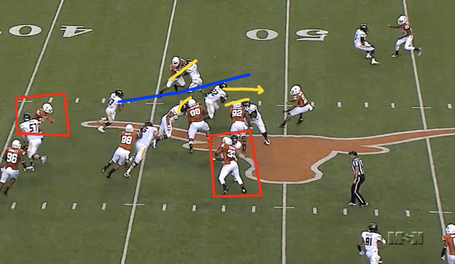 Comment: Yeah, it's not happening. West Virginia's blockers have held integrity of the hole, and Phillips is pulling up as the lead blocker bears down.. 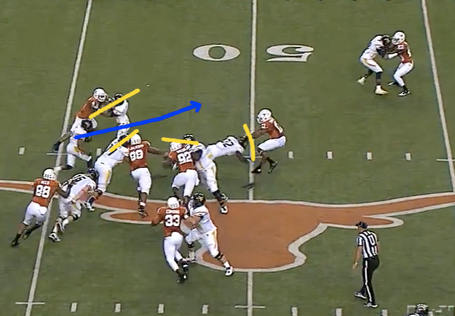 Comment: As Buie arrives in the hole, we've failed to break through a single one of our blocks to close the hole. 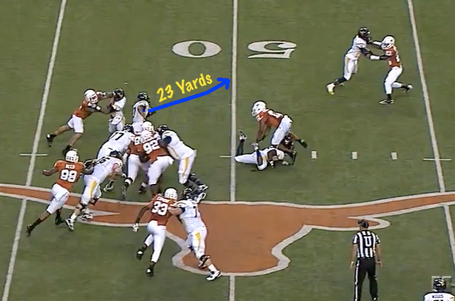 That's not a tackling issue. It's not a player brain freeze issue. It's a bad damn defensive call, inviting precisely the counterattack that West Virginia deploys -- using Jackson and Wilson's twist against them to seal them inside from the C-gap and ignoring our weakside attacks, which won't arrive in time. And with Diaz taking Edmond and Thompson right out of the play by having both run blitz on the weakside, this is candy-from-a-baby easy for the Mountaineers.

(After this drive to put WVU up 21-7, Diaz did make one good adjustment with our run fits that helped us have a strong finish to the first half, but when Dana Holgorsen made a counter-adjustment of his own in the second half, Diaz didn't have an answer.)