Texas fans on Twitter deal with the first loss of the season.

Something strange is happening to our football. Saturday made this clear. New ideas about offense and when to punt have come to college football. These concepts are only starting to spread -- I watched a decidedly twentieth century game between Florida and LSU on Saturday -- but new ideas are here. When the offense has a significant advantage over the defense, as it did in the Texas / West Virginia match up, there is rarely a reason to punt. Modern offenses can overwhelm all but the very best defenses, presenting the defense with too many things to defend at once; this is not new. But what is new is the realization by football coaches that this shift of balance between offense and defense means that they no longer should punt the ball from midfield.

What was striking about the Texas / West Virginia game is that both coaches, and not just one, embraced this idea. Both teams refused the option to punt in many normal punting situations. While this might seem jarring, we as fans are just going to have to get used to it. It is the future of football, once predicted by Don Shula.

A year ago at the Hall of Fame reception in Canton, Ohio I found myself sitting between Bill Walsh and Don Shula. I posed this question: In a day when the Bears line up five-wide and Texas Tech passes 60 times a game, are there any fundamental innovations that have not been tried? Walsh supposed someone might try using trick formations for an entire game. Shula twinkled his eyes and said: "Someday there will be a coach who doesn't punt." -- Gregg Easterbrook (ESPN.com, September 26, 2006)

Twitter suggests that we still have some work to do at getting accustomed to this hypermodern approach to football. At a basic level, it changes the way we watch the game. Stopping the other team on third down is no longer enough. Aside from further tilting the balance of power towards the offense, using four downs increases the number of highly stressful plays that we must endure as fans. Dustin Matocha summed it up best in his tweet:

All in all, Longhorn fans on Twitter were mixed in their responses to Texas' attempts on fourth down. On the con side:

Longhorns are dumb for going for it on numerous 4th downs

There were also those in favor of going for it on fourth down. Jim Vertuno likes that it adds some additional fun to the game.

Give Mack credit for going for it on 4th down. Aggressive football is fun football.#WVU #hookem

Clearly he cannot tell the difference between fun and stress.

Where were the David Ash tweets?

Perhaps the most interesting thing happening on Twitter during the game was how little people were tweeting about David Ash. Only 180 tweets that my searches captured mentioned the word "Ash" this week. Last week, my database contained 1378 tweets with the word "Ash." People tweet mostly about big plays and touchdowns, and there weren't many of those involving David Ash this week.

Ash tweets remain overwhelmingly positive, even after the snap mess-up. He has now earned the benefit of the doubt from Texas fans. This is quite an accomplishment, given how tough to please Texas fans can be.

Remember, its a growing process to the ultimate goal.Took VY & mccoy 3 years to get there... Ash is bringing it. Im excited! #HookemHorns

The chart below plots the number of tweets about David Ash (red) and the defense (green) over the course of the Texas game. The negativity index (blue), which is a composite of tweets containing certain key words that suggest unhappy Longhorns fans, is also plotted. As I mentioned above, there were remarkably few tweets about David Ash. There were more than 700 tweets about the Texas defense. This game also brought the largest spike in negativity so far this year, which happened as time expired. This is not surprising. 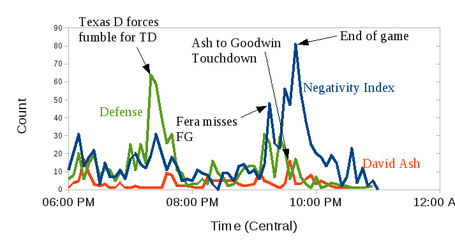 One spike in negativity occurred when Anthony Fera missed his fourth quarter field goal attempt. This was a rough introduction of Fera to Longhorn Nation.

When Fera missed that kick, the large group of West Virginia alumni that I was watching the game with started chanting, "We were... Penn State." I have to admit this was sort of funny.

The trials of the Texas defense

As kickoff approached, fans were justifiably concerned about the Texas defense.

Almost game time! Hope my Longhorns remembered to wake up their defense this week... #HookEm

Although there was at least some degree of confidence.

Once the game started, and West Virginia moved the ball with ease, Twitter users started to respond. The tweet below is one good example.

Still don't get people who thought this Texas defense could all of a sudden play well against best offense they've faced so far. #Hookem

Twitter users remained down on the Texas defense until Alex Okafor sacked Gino Smith at the goal line, resulting in a fumble and a Texas touchdown.

The Texas defense has supreme talent, but doesn't always execute. This is what they're capable of. #HookEm

There were few other bright spots for the defense in this game. By the end of the night, Longhorns fans seemed resigned to the idea that their defense isn't very good.

How should we feel as fans after this game?

This is the question that I am left pondering after what was a very disappointing loss. I obviously can only answer it for myself -- I can't tell you how you should feel.

And yet, the first loss is always tough when it happens. It is never fun to lose a close game. (It also isn't fun getting blown out -- losing sucks no matter how it happens.) So I am disappointed in how things went. If Ash collected one more snap cleanly, who knows how the game would have ended.

All in all, I feel at peace with this team. It feels a lot like a somewhat better version the Texas teams of the mid 90s: good offense with talented playmakers in the back field, and an inability to stop the run on defense. Those teams were still capable of great moments, and they were the teams that introduced me to Texas football when I arrived on the 40 acres as a student -- so those great moments are some of my happiest ones as a sports fan.

So while we have suffered the first great disappointment of the season, remember that good times are still ahead of us.