How long does it take a wishbone to travel via Twitter?

What does placing a game on the Longhorn Network do to the engagement of Texas fans? Fan engagement goes down when you broadcast a football game on a network that no one outside of a handful of markets can see. We see this quite clearly on Twitter, where there were far fewer people commenting on the Texas - Iowa State game than what we have seen in recent weeks. Using identical search strings, during last week's contest between Texas and Texas Tech I collected 13,200 tweets. During this week's game against Iowa State, I captured 6,100 tweets. This is the lowest total of the season.

I don't know what this loss in fan engagement is actually worth. Probably not much, if it is isolated to a game here or there that ends up on the Longhorn Network. All I know is that while Texas is actually 8-2, its record is 5-2 in games that most of the fan base is able to see. There are people like myself who are willing to engage the crazy workarounds needed to catch LHN games, but most people cannot be expected to go to this sort of trouble.

The Longhorn Network money is good. I understand that. But with each additional game that gets moved to the LHN, fan interest in the team decreases. I don't know at what point this becomes catastrophic -- it clearly isn't at only three games. But at some point, if more games are moved to the LHN each season without a corresponding increase in the subscriber base, it will start to hurt the program. The basic fact is moving the games to the LHN makes it harder for folks to follow the team, and only the truly devoted fans and alumni will continue to expend the effort. The financial juggernaut that is Texas football exists not just because of the large alumni base who are with the Longhorns no matter what, but because of the ability to rope in casual fans of the team. If too many games move to the LHN, Texas will keep alumni support, but they will lose the casual fan.

Each week, I run a report that summarizes the keywords that show up most frequently in tweets about the Texas game. This helps to guide me in my exploration of the data. Below I list the top ten words that appeared in my database during the Texas vs. Iowa State game. See if you notice a pattern.

There were more tweets pertaining to Darrell Royal than anything else. With Royal passing this week, and with many fans unable to see the game, tweets about Royal dominated.

The time line of Royal related tweets is fascinating. The plot below summarizes some of the Twitter activity during the game. The negativity index is not included this week, as it registered only 100 tweets over the course of the period that I monitored, which is a number too low to be meaningful. The number of tweets mentioning David Ash, Mike Davis, Darrell Royal and the wishbone are plotted as a function of time. 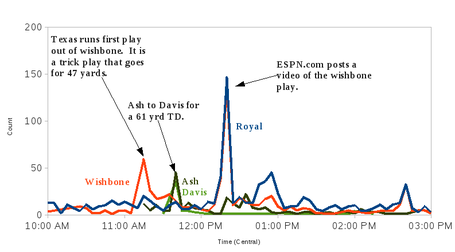 At approximately 11:15 AM central time, Texas lined up in the wishbone and ran a double pass that went for 47 yards. This produced some Twitter traffic.

Line up in the wishbone, toss to Shipley, throwback to Ash, bomb to Daniels.Just like DKR designed it. :) #hookem #UT

But the real spike in traffic referencing Royal and the wishbone came an hour later, when ESPN.com posted a video of the play on its website. Since so few Texas fans saw the play live, this was their first chance to see it. I captured around 200 tweets of people passing along links to the ESPN video. It is a strange way to watch a football game, but then again we live in strange times.

Texas fans unable to watch this game missed what was perhaps the best performance so far for the young Texas quarterback. Ash was sharp early, moving Texas down the field on its second series for a touchdown. After the Texas defense forced a Cyclone three and out, the Longhorn offense returned to the field. Ash hit Mike Davis for a 61 yard touchdown strike on the very first play of the drive.

That may be the best pass David Ash has thrown all season! #touchdownhorns #\m/ #Longhorns #hook'em

That was a beautiful spun ball by Ash. Just a frozen rope to Mike right up the seam #hookem

Ash stayed hot through the end of the first half.

Ash with his second TD pass of the game. This one to Matthews on a misdirection. Ash has just one incomplete pass. #ut #horns

No one was calling for Case McCoy this week. In the second half, the Longhorns pulled back the reigns, and focused more on the running game. Ash exited the game after the first drive of the fourth quarter.

Ash dealing. A couple bad games but definitely should not be a QB controversy in Austin. #HookEm

That is at least true for a week.

Just spotted Miss Edith Royal, she made it to the game today. She's been getting lots of hugs. #longhorns #DKR