At least there was pumpkin pie to comfort us.

There will always be boys like Case McCoy. They will sweep you off your feet with their curly locks and herky-jerky delivery. It will be fun for a while, thrilling even, being with a boy like this -- his errant passes bouncing off the hands of defensive backs; it can be exciting to sit so close to danger. Many days it will seem like fate always smiles on your new crush, and that he can do no wrong. These sorts of boys will occasionally deliver moments of tremendous joy. You can't be blamed for falling for a boy like this.

But Sarah, there is going to come a time in these relationships where something terrible happens. Boys like this are exciting precisely because they are reckless. They will eventually do something reckless, and it break your heart.

It is not about you, Sarah, it really isn't. It is about him -- about these sorts of boys. Be honest with yourself, you knew this day would come.

It is going to be okay. There will be other boys that come along. Some will break your heart, but others will not. So keep your chin up, and Hook 'Em.

Overindulging during Thanksgiving is an important part of being an American. I don't really care for turkey(*). I like carbs. Lots and lots of carbs. Thursday afternoon I ate a massive pile of mashed potatoes straight out of Close Encounters of the Third Kind. There were three types of dressing; I ate all three. There were rolls. There was pie.

(*Ben Franklin once suggested that the turkey would have been a better choice as the national bird of the United States. Reflecting on this only makes me think one thing -- I wonder about the proper cooking temperature for bald eagle.)

As game time rolled around, I was pretty mellow, pacified by sugar and starch. I watched the game in a dream-like daze -- it didn't seem real. My mental state, combined with the clock sapping running game of TCU, caused the game to fly by quickly. McCoy was in, then he was out, then he was back in again. I could feel no pain, hopped up on my mother's garlic mashed potatoes.

Not everyone experienced the game as I did. This week, my searches captured 11,600 tweets. Highlights of Twitter traffic during the game are summarized by the plot below, which plots the number of tweets mentioning the keywords "Ash," "McCoy," and "turkey" as a function of time. I also have plotted the negativity index, which spiked on McCoy's interception. Note that when this happened, people decided to drown their sorrows in turkey. 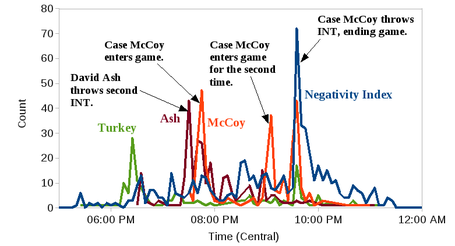 Too much turkey, combined with lousy play, bothered a few folks.

Others were left in a saddened daze, just like me.

Sorry, Longhorns. I hope all of your fans aren't as sad as this turkey man. #gofrogs twitter.com/LindsayClareRa…

After the game ended, I ate all of the remaining dressing in the house. I piled into a bowl and heated it in the microwave. The outside was scorching hot, while the interior was still a bit cold. I ate it anyway.