It's baaaaack! Analyzing how a Manny Diaz Special led to the longest gain of the day for the Horned Frogs. Also known as the Fail Buffet.

Share All sharing options for: Snap Shots: How TCU gashed Texas on a simple zone read

It didn't take long for the TCU offensive strategy against Texas to become apparent -- on the opening drive, the Horned Frogs ran the ball on 11 of 14 plays, gaining two thirds of the drive's rushing yards on those plays.

Perhaps buoyed by having the success that they probably expected, TCU ran the ball on the first five plays on their second drive, though a 6-yard scramble by quarterback Trevone Boykin helped keep the drive alive

After a run for no gain following Boykin's conversion, TCU faced a 2nd and 10 from the Texas 35

Somewhere inside the head of Manny Diaz, the defensive coordinator was apparently thinking that since 2nd down and 10 is a passing down, it would be a good time to twist the defensive line.

The thought process may have some holes in it. Kinda like the Texas run defense! 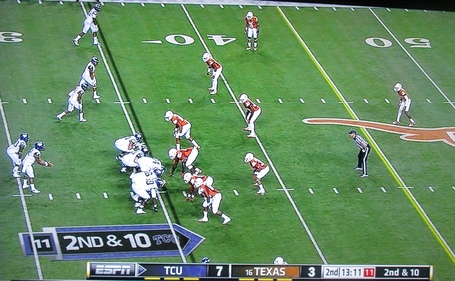 TCU lines up in the shotgun in 10 personnel, with three wide receivers split to the wide side of the field and one wide receiver to the boundary.

Prior to this screenshot, running back BJ Catalon had lined up to Boykin's right. Texas does not change their defensive alignment in response. 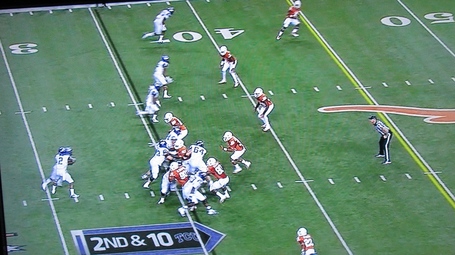 Boykin and Catalon execute their zone-read mesh, with Boykin reading the strongside defensive end, who is not crashing down on the play and is instead giving Boykin a give read to the running back.

Meanwhile, Kendall Thompson, the weakside 'backer, has shifted over a gap as Alex Okafor twists inside while defensive tackle Malcom Brown twists outside, leaving cornerback Carrington Byndom with outside contain and little help for him with both safeties deep.

The problem with such twists is that the defensive end can be late filling his new gap, as happened with Okafor on the long run against Kansas.

Another problem? Instead of sending his athletic, 300+-pound body into the backfield, Brown is instead asked to move laterally while engaged with with the left guard. It's not a terrible thing, though, that the true freshman's momentum is taking him upfield, as it forces the running back inside, where Okafor could make a play.

Unfortunately for Texas, the TCU right guard's movement against Brown creates an easy crease for the running back to hit. Okafor should be able to help there, but he's also struggled this season in these situations and is currently playing at well less than full health. On one leg, basically.

Fortunately, Byndom is there! Everything should be fine, since the junior entered the season as a possible early-entrant candidate intent on proving to NFL scouts that he has what it takes to earn an NFL paycheck in the near future.

Unfortunately, Byndom isn't really there. As this shot shows, Byndom has taken a step too far inside and looks ready to lose his leverage and allow Catalon to get outside, where he becomes much more dangerous with his breakaway speed.

Meanwhile, Thompson has been engulfed inside by the right tackle, taking away another potential tackler.

On the backside of the play, strongside 'backer Steve Edmond had paused to read the quarterback and determine where the football was going. He's now headed towards the football. Will he account for the fact that he's a bit slow to range this far and take a conservative angle? 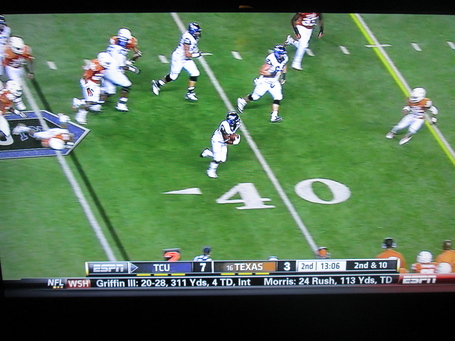 Well, there's Byndom on the ground there, having indeed missed his tackle attempt.

Edmond has had to widen out his angle already, realizing that he won't be able to cut off Catalon like he thought he could.

But here comes the left safety, sophomore Josh Turner, ready to save the play! If Turner can make the tackle, it's about a 10-yard gain. Frustrating, but no biggie. 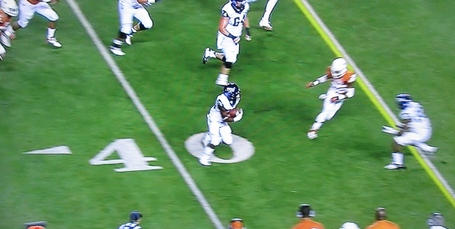 Uh oh. Here comes the X receiver, set to spring Catalon down the sideline for a big gain. 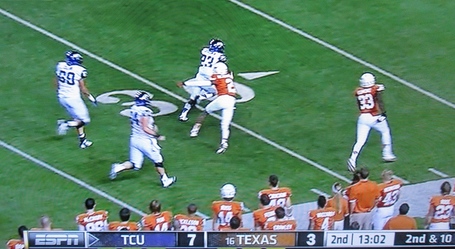 Turner gets taken out by the block and roughly 27 yards later, Edmond's angle hasn't allowed him to make contact with Catalon, who has cut inside of the right safety Mykkele Thompson. Fortunately for Texas, Thompson was able to get a handful of Catalon's jersey as he went by and was strong enough to hold on, likely saving a touchdown. 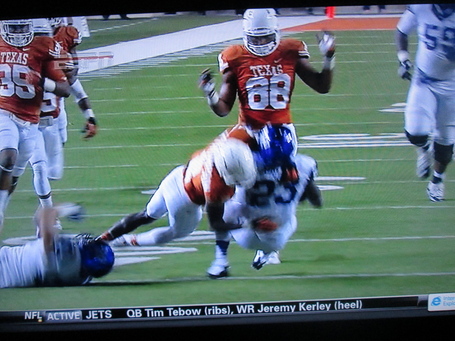 Thompson then takes down Catalon with a physical tackle that includes Thompson's left arm around Catalon's throat.

Even Fail Buffets must come to an end. Eventually.

Sigh. This has been a problem for a while.

After all, this type of thing was the impetus for the cease and desist letter composed for Diaz, written several days before Texas gave up that 64-yard run against Kansas because of twisting along the defensive line.

Then the Longhorns mostly backed away from the strategy in favor of more basic defense against Texas Tech, until Diaz decided that he needed to return to his old ways against Iowa State, blitzing and stunting and twisting to his heart's content, with few serious consequences.

More than just the mindless end-tackle twist that Diaz loves to employ so much on early downs that he can't abandon running it, there were some questionable moves by the linebackers on this play -- the failure of the defense to adjust to the offense switching the running back from one side to the other, Thompson's slide to the side of the field where Texas had the most help defensively, and the poor angle and less-than-ideal hustle from Edmond, who didn't exactly seem to be going full speed with his first several steps.

More youthful moments for the two young players, who had taken steps forward in the last several weeks.

And, of course, no Longhorn Fail Buffet is complete without a missed tackle this season, provided here courtesy of Byndom, who missed several other tackle attempts on the day, including on one the other long run from TCU, broken off by Boykin that led to a field goal.

Byndom was thought to have turned the corner after a strong game against Texas Tech, but the regression in terms of achieving results as a tackler was evident.

Overall, it seems like a long time ago that Diaz was considered an intellectually-curious defensive coordinator interested in sabermetrics and unmarried to a specific ideology.

From the calls that he keeps on making, he doesn't seem to understand how the risks he is taking are causing problems -- the two longest gains on the ground in the last four games came on early-down plays when Diaz was twisting the defensive line.

At this point, it's just extraordinarily frustrating. Just stop with it!