Texas Longhorns Football Twitter Recap: Texas vs. Texas Tech, and How the World Thinks Your Story is Stupid

Share All sharing options for: Texas Longhorns Football Twitter Recap: Texas vs. Texas Tech, and How the World Thinks Your Story is Stupid

How do we react when the story shifts? As sports fans, we have been raised on a steady diet of straight line narratives. These simple fantasies -- the Texas defense will be great, David Ash is terrible -- account for things, and help us put what we see into perspective. We want these simple fantasies to hold, as they help us to understand.

But reality doesn't care what you want; it does what it does. It does not care if you understand. Sometimes, the story takes a sharp turn in an unexpected direction. We have seen this happen several times during this Texas football season. Coming into the season, Texas fans were prepared for a great defense, and miserable quarterback play. The first major plot twist occurred during Texas' trip to Mississippi. After Texas' win against Ole' Miss, Longhorn fans started to rethink the story, which now featured a troubling defense and an emerging star at quarterback.

The next several weeks supported this view. Then things went to hell in Dallas, and the story quickly shifted to "everyone must die." A dark cloud hung over the team for the month October. The story became progressively worse, and even included a reprisal of the preseason concern with David Ash. The story over this last week was that David Ash is terrible, should be benched, should transfer to Texas State, should be sent into exile.

The shifting story is why it is hard to write the season narrative before the season is over. We want to rush to figure out the answer before we have all of the information. This is just human nature, but it clouds our ability to see clearly. My favorite literary quote pertains to this.

It is a capital mistake to theorize before one has data. Insensibly one begins to twist facts to suit theories, instead of theories to suit facts. -- Sherlock Holmes (A Scandal in Bohemia, Sir Arthur Conan Doyle)

So let's just worry about today. And there is one thing we all agree on.

I realllyyyyyy need my defense to show up today!! #HOOKEM #wrecktech

It is good to have fun again. The month of October has not been much fun for fans of the Longhorns. But last Saturday, well, that was fun. And your heart would have to be made of stone to not enjoy Mack Brown's reaction as the end of the game approached in Lubbock.

Judging by how fired up he was over the win, if Mack Brown doesn't try ecstasy tonight, he never will. #staysafeMack #HookEm

Twitter traffic was up this week. I collected 13,200 tweets, compared with last week's total of 8,400. The plot below summarizes some of the Twitter activity during the game. The negativity index is not included this week, as it wasn't particularly active. The number of tweets mentioning David Ash, Mike Davis, Mack Brown, and Carrington Byndom are plotted as a function of time. 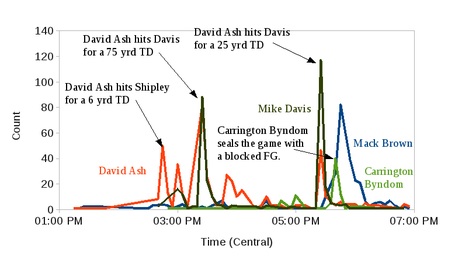 The Ballad of David Ash

The sequence of tweets about David Ash during the game on Saturday provides an interesting study in how emotions and opinions shift over the course of a few hours. At the start of the game, some were wondering why David Ash, and not Case McCoy, was starting the game.

So Ash couldn't do anything against the worst D in the Big 12, yet he gets the start? #macklogic #hookem

But Ash came out strong, prompting his supporters to speak up.

Again, I hope all you critics who called for Ash to be benched are watching.

After Ash hit the first big pass of the day to Mike Davis, the support for his candidacy as starting quarterback at The University of Texas grew.

HUGE throw by Ash to Mike Davis for a 54 yard gain! where has this been?? #HookEm

McCoy would've thrown, caught, and run that ball in, all at the same time... Ash looking good! #hatersgonnahate #hookem

Shortly later, Ash followed up with a 75 yard touchdown strike to Mike Davis, and fans were ecstatic.

Ash and Mike Davis hook up again on the play action pass, this time for a Texas score. Longhorns now lead 21-10 with 13:46 left in the half.

@hookemfans At this point I take back 45% of the ugly things I've said about David Ash in the last couple of weeks.#hookem

Ash is making me look like a chump for calling for case. Great half for him. #HookEm

But then in the second half, Ash started to struggle. The response on Twitter was fairly predictable.

After a 9 for 10 completion start, #Longhorns QB David Ash has gone 1 for 8

During this third quarter slump, no tweet quite captures the sentiment that "the last thing that happened is the only thing that ever happened" better than this one.

Someone please tell me McCoy is warming up. I know Ash got us here, but he's done in the 2nd half. #hookem

Touchdown Texas! Ash to Mike Davis for the 3rd time!! what a game both are having. #HookEm

Hook 'em!! Good job @ut_mackbrownYou were right with your pick to stick with Ash.#Longhorns

To my fellow Longhorns out there... A big W 3 tds 264 yds 0 ints. Please dont ask for McCoy again after a SINGLE bad game. #proven #hookem

Carrington Byndom was getting some appreciation on Saturday even before he blocked Texas Tech's final field goal attempt. It is pretty rare that people will tweet things that are positive about defensive backs, as when a DB plays well he mostly goes unnoticed. But in Byndom's case, he was making big and noticeable plays all game.

Byndom was having a very good day. And things got a whole lot better when he blocked Texas Tech's field goal attempt with a little more than five minutes remaining, sealing the game for the Longhorns. There were a lot of tweets like this one.

Yea, that was a lot of fun. I shouted when it happened, startling my dogs. Mack Brown also seemed to enjoy it.