Texas Pulls Together To Grab Road Win Over Texas Tech

The Longhorns set their October struggles aside and started November by picking up a big win in Lubbock, knocking off the Red Raiders 31-22 to improve to 7-2 on the season.

Share All sharing options for: Texas Pulls Together To Grab Road Win Over Texas Tech

I spent the weekend out at a friend's ranch just west of Bandera, which is why I'm late in getting this post put together. But after such an deflating, disorienting, and downright exhausting month of October, it's impossible to overstate how nice it was to watch Texas deliver a win that we could all feel good about. This one's worth talking about a little bit more, even a few days later...

The Longhorns opened November with a hard-fought 31-22 win in Lubbock -- a challenging place to pick up a win under the best of circumstances -- that improves their season record to 7-2 overall, 4-2 in the Big 12, and provides a boost of desperately needed confidence to a team that appeared to be dangerously close to derailing after last week's wobbly win over the Jayhawks in Lawrence, and to a fan base that pretty much did derail after last week's escape at KU. You think Mack Brown knew it? 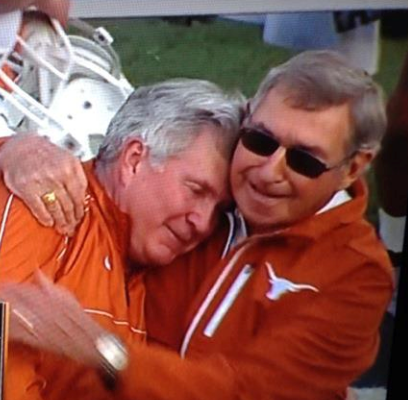 Texas got off to a great start on Saturday, limiting the Red Raiders to a three-and-out on their opening possession, then marched down the field on a 9-play, 71-yard scoring drive that set the tone for the rest of the game. Although Texas Tech would answer to tie up the game at 7, the Longhorns continued to assert their will on offense, held up in the red zone on defense, and won the big play battle throughout, to put together what was the best overall team performance since at least September, and perhaps all year.

Still fighting. Even during the lowest points of October, the one positive I consistently noted was that whatever else was ailing this team, its struggles did not appear attributable to having quit. They looked lost, but not defeated. This group has been provided plenty of opportunities to quit or implode, but even as they weren't able to respond with better play, neither were they giving up. That's no small thing, not only for its impact on this season's final tally, but as an encouraging sign about the strength and quality of the leadership in this group of players, most of which will be in place again next year.

You see it in the indomitable David Ash, who bounced back from an incredibly brutal three-week stretch to deliver exactly what Bryan Harsin wanted and needed of him against Tech. You see it in Ash congratulating Case McCoy after his game-winner against Kansas, and in McCoy in supporting Ash when he succeeded a week later. You see it in Jonathan Gray, who is one of those players who is demonstrably eager to be great, and whose Must Succeed attitude is infectious. You see it in the how hard this team plays on special teams, in the pride and effort they put into trying to block kicks. You see it in the ways Cedric Reed genuinely seems excited for his opportunity -- and to make the most of it -- and in the way Carrington Byndom rose to the occasion when we needed him most.

Whatever else this group of players is and isn't, it's a group that wears the Longhorn helmet with pride, plays hard, and wants to win. Even after such a tumultuous, disappointing month, this remains a likable group of players it's easy to root for. A team with less character would have folded after October; this team refused to give up, and they rallied strong on Saturday for the win they needed.

The defense stops the bleeding. The defensive performance was not exactly what you'd call strong... but it was an effective enough performance in a number of critical regards. The Texas D showed meaningful improvement, played hard throughout, and took a welcome, if belated, step forward by simplifying its approach, keeping the ball in front of it, tackling better, and avoiding big plays.

That there remains plenty of room for further improvement is obvious enough considering the Red Raiders racked up 441 yards of total offense at an average of 6.1 yards per play, but the defense was unquestionably improved and -- most importantly -- it finally, mercifully stopped the bleeding. Although the Longhorns did allow 12 plays of 15 or more yards, they disallowed any of the backbreaking big plays that have been crippling them all season (Tech's longest play from scrimmage went for 25 yards), they got the kind of line you want to see from Seth Doege (26-44 for 329, 1 TD), they got the Red Raiders off the field on 3rd down, and they held strong in the red zone. We'll never know whether that would have held up had Tommy Tubberville not been so cooperative on 4th down, but the end result of Tech's 6 trips to the red zone was just 2 touchdowns and 4 field goal attempts, one of which Texas blocked.

Bryan Harsin is a ninja. On Saturday in Lubbock we saw the offensive game plan that I was expecting to see in the Cotton Bowl against OU. We can speculate as to the reasons why it didn't happen that way, but whatever the explanation Texas fans were treated to an absolute masterpiece against Texas Tech. Harsin zigged when Tech was looking for us to zag and vice versa, and when it came time to finish off the Red Raiders, we lined up and just straight up beat them at the line of scrimmage. Just like we did last year when the Red Raiders came to Austin.

The offense's final tallies weren't as PlayStation-esque as in the rout in Oxford (78 plays, 676 yards, 8.7 yards per play), but facing stiffer resistance Texas was brilliantly successful on Saturday, thrashing Tech for 427 yards on just 58 plays, an average of 7.4 per play. Harsin's counterattacks to various adjustments that Big 12 defensive coordinators have been making were well-conceived and ridiculously productive, while a handful of smaller wrinkles bore fruit as well -- most notably the adjustments Harsin made to assist David Ash in the deep passing game. Recognizing that Ash was struggling with the depth and touch on over-the-top throws down the field, Harsin realigned the deep routes to give Ash an angling target to throw to. Where Ash had been aiming lobs before, presented with this more favorable geometry he stepped into and threw line drives on a perfect lead, and Mike Davis took care of the rest.

The Texas running game wasn't as explosive, but it was quietly impressive against a Tech defense that clearly intended to try to stop the run and make Ash beat it. Harsin was ready for that, but the running game took care of its business in impressive, workmanlike fashion, and succeeded in putting the game away with a game-sealing drive against a defense that knew what was coming but couldn't stop it.

B. Making his first career start, Jonathan Gray was brilliant in an understated way that reminded me a lot of the very first time I saw Jonathan Gray -- not as a Longhorn, but as a Bearcat during Gray's junior season, when Aledo visited Lake Travis and handed the Cavs their only loss of the season. After watching Gray help pound out the win despite Lake Travis's "all 11 guys on Gray" defense, I wrote:

Overall, a little hard to get a feel for what he can do in the open field, because Aledo was smothered all night. Gray is easy to root for though -- I like his style. Handled himself well despite having absolutely nowhere to run. His toughness stands out; he's not a guy who's going to lose yards very often. Showed good vision and patience, and hit seams hard. The speed is good, but the acceleration is what's special. He's got powerful hips, and he plants and goes exceptionally well. He's more sudden than quick, if you know what I mean. Not afraid of contact, and Big Roy got a great video shot of him trucking a safety to finish his best run of the first half.

That could have been written about Gray's performance against Texas Tech on Saturday, in which he toughed out 106 hard earned yards on 20 carries, with just a single carry losing yardage. To be honest? Jonathan Gray is even easier to root for than I imagined he'd be. The kid's toughness and competitiveness and drive to be great are infectious. He's great at all the stuff you can teach, and has all the stuff that you can't. If he stays healthy, it's going to be a special Longhorn career.

Chance to finish strong. The manner by which we lost to OU was unforgivable, but outside of that calamitous result -- which, unfortunately, cannot be brushed off as an outlier -- Texas is trending towards exactly the kind of season a lot of us were hoping to see from the team this year. At 7-2 with three games to play, including a season finale at national title-contending K-State, should Texas win out to finish at 10-2, this team could easily find itself playing in a BCS Bowl; all it would take is a third loss on the season from Oklahoma.

This hasn't been the season that we wanted, but there are plenty of things to like about this team and group of players, particularly this week after they picked themselves up from the ground to pick up a hugely satisfying road win in Lubbock. It'll be interesting to see whether this team can take the next step forward and make a run at three more wins. After the October we just had, I'm glad that's the question for November.