The Longhorns will wear special helmets against Iowa St. to honor DKR.

As part of the tribute to former head coach Darrell K. Royal, the Texas Longhorns will wear helmet decals on Saturday morning with his initials. 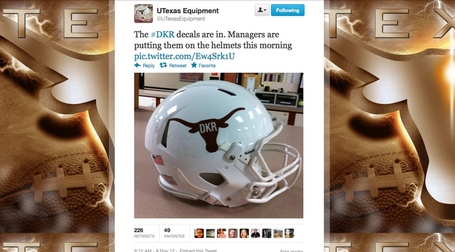 A fitting place for it, as DKR himself was responsible for the creation of it:

As he was preparing for his fifth season as head coach of the Longhorns in 1961, Darrell Royal asked sporting-goods merchant William "Rooster" Andrews to design a team logo. The diminutive Andrews, a Longhorn legend from his days in the ’40s as equipment manager and occasional kicker for the football team, gave Royal a crayon drawing of a longhorn head. "This is it!" Royal exclaimed. "And can we put it on a helmet?"

Jut another reason why Coach Royal was the greatest.