Share All sharing options for: Texas Longhorns Football Twitter Recap: Texas vs. Kansas State, and the Metamorphosis of Case McCoy

One morning, when Case McCoy woke from troubled dreams, he found himself transformed in his bed into the starting quarterback of The University of Texas. He lay in his shoulder pads, and if he lifted his head a little he could see his hip pads and cleats. The bedding was hardly able to cover them and seemed ready to slide off any moment. His arms and legs, pitifully thin compared with those of other football players, waved about helplessly as he looked.

Case McCoy with the pick 6!Threw the ball like he was throwing to his grandma.Get him out the game. #hookem #horns

The folks on Twitter are tough; they will turn on you in an instant.

#Longhorns down 6-0 already...geez mccoy shouldnt even be starting for a d 1 program...hes not talented enough..

Case McCoy looks like a dude that spends his weekends trying to lure kids into his windowless van with that lil' mustache. #Horns

"Oh, God", he thought, "what a strenuous career it is that I've chosen! On the field day in and day out. Playing like this takes much more effort than signaling plays from the sideline, and on top of that there's the curse of defensive coverages, worries about the pass rush, irregular play calling, contact with different people all the time so that you can never get to know anyone or become friendly with them. It can all go to Hell!"

The thing is, just as quickly as people will turn against you, they can get back on your side. Throw a touchdown pass and get your team back in the game, and people will love you again. People want to love more than they want to hate.

Hit a few passes, throw for a touchdown, get on a roll, and everyone is back in your corner.

I see flashes of Colt in this McCoy. Give him time #Longhorns fans.

Longhorn fans would give him time; they gave him about a quarter and a half.

"We can't carry on like this. Maybe you can't see it, but I can. Although this monster shares a name with his brother, all I can say is: we have to try and get rid of it. We've done all that's humanly possible to look after it and be patient, I don't think anyone could accuse us of doing anything wrong."

(Adapted from the Project Gutenberg version of Metamorphosis, by Franz Kafka, translated by David Wyllie.)

This week, my searches captured 10,300 tweets. Highlights of Twitter traffic during the game are summarized by the plot below, which plots the number of tweets mentioning the keyword "McCoy" as a function of time, divided by four. I also have plotted the negativity index, which grew towards the end of the game. I want to focus on tweets about the Texas quarterback, as they illustrate just how fickle support for the Texas signal caller can be -- support that is almost as fickle for Case McCoy as it is for David Ash. 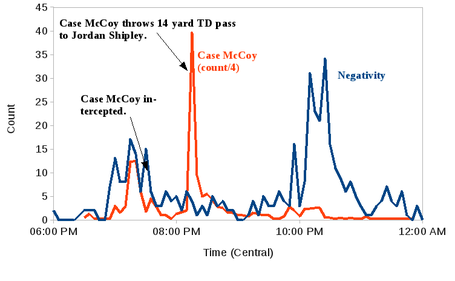 For a stretch of last Saturday's game, even Case McCoy's detractors had to admit that things were going pretty well.

I'm as far from a McCoy fan as you'll find, but I'm Texas Til I Die, so #Hookem

Noodle arm McCoy has had a good first half, I hope we keep this up. #hookem

McCoy's supporters were loud and proud. McCoy's first half even induced one marriage proposal of dubious legality.

Did I mention I'm marrying both Case McCoy and DJ Monroe? #polygamy #hookem

Things did not go as well in the second half. The tweeting started to get ugly near the end of the game.

Case McCoy looks like a fetus with teeth. #texas #horns

Wrapping up the Season

One night while my wife was at her book club, I started messing with the Twitter API for no particular reason. I quickly realized that it was possible, and in fact rather easy, to "tape record" live events on Twitter. So last summer, I sent a short email to the other BON authors about an idea that I had. I would capture live tweets during the Texas football games. I had absolutely no idea what the data would look like, or what I would do with them. My early efforts in this weekly column reflect that.

As the season wore on, it became clear that Twitter provided me a way to look at the emotions of a fan base in real time, as events occurred. In good situations, and in bad ones, Twitter provides a way of capturing how people feel in the moment. Through this process, I have learned some things about the Texas fan base.

The Texas fan base not surprisingly encompasses all sorts of people. When engaged in a game, Texas fans can be funny, although most of the tweets are pretty dull. Some fans are truly charming -- their charm leaping through the wires in 140 character blasts. Others are shockingly cruel; I probably ought to pass along some of the tweets I captured this season to the FBI.

I don't know if Twitter tells us much about how people feel when they reflect -- it isn't much use for reflection. When we reflect on our words and thoughts, we tend to not behave the way many do on Twitter. Just this week, I found a large number of tweets mocking Case McCoy's less than matinee-idol looks. Some of them were just terrible, although I have to admit that some were also rather funny.

Doing this weekly column has often left me rather depressed about the nature of the Texas fan base. I always have to remind myself that there are always bad apples, and I shouldn't let them get me down. A segment of the fan base acts like spoiled children, and another segment is ruthless and mean.

But we are not all like that. More than likely, most of us are not. We are mad in the moment, but later we will be able to reflect.

Longhorns, I love you forever, but you have made me very angry several times this season.