Texas Football Twitter Recap: We are all going to die, fire every..... WHA?

The tastiest Sooner tears are the ones that you don't expect to drink.

Share All sharing options for: Texas Football Twitter Recap: We are all going to die, fire every..... WHA?

One of the odd things about reality is it often throws us curveballs. When we are sure something is going to happen, something rather different occurs more frequently than we would like to admit.

Which brings us to last Saturday morning. I woke up and told my wife how I kind of felt sorry for Case McCoy, because while I am generally unimpressed with his play, I do not wish him physical harm. And I assumed that physical harm was in his future.

But thankfully, the afternoon played out differently. The previously maligned Texas offensive line beat the snot out of the Sooner defensive front. It was the sort of tar-beating that allows one to spend the rest of their day happy. McCoy was kept mostly out of harm's way, and was allowed to make a few down-field passes, which paired nicely with Texas' ability to run the ball straight up the middle.

Meanwhile, the Texas D made the plays that they should make, and threw in a few big interceptions for good measure. Defensive competence made the OU offense look as non-threatening as the Longhorn offense has at times appeared. When your opponent is seemingly incapable of hitting a big play from scrimmage, football is far less scary.

But all of this puts us in a weird (yet happier) place. I am convinced that people are hard-wired to not want to change their points of view on much of anything; or if it isn't wired in, it is at least coded in the firmware. Forming new opinions and viewpoints takes substantial hard work, just because so much circuitry must be overcome. It doesn't easily happen on the fly.

Given this, I was curious to see how this Texas game would be received by the fan base. Is it a one game anomaly where one team just played out of its mind against a rival? Is this a turning point for the season? And how will fans rationalize their frustrations with Mack Brown in the face of this win? So many temporary contradictions. And there is a lot of football left.

This week, I captured over 31,000 tweets during the course of the game. Much like last year, this will likely be the season high, as OU seems to attract more attention than any other opponent on the Texas schedule. I had to throw out the negativity index this week, as people tweeting "OU sucks" in various forms messes it up. 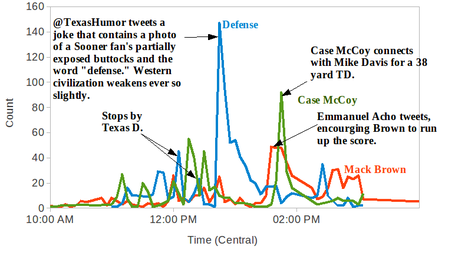 Some of the time, spikes in tweeting activity on a particular keyword correlates with things happening in the game. Other times, it does not. There were several significant uncorrelated spikes, such as one that occurred when Emmanuel Acho was retweeted many times for this:

Mack on behalf of Longhorns worldwide, I'm gonna tell you 1 time and 1 time only... RUN UP THE SCORE! #Hook'em!

Not surprisingly, Texas fans didn't have high hopes prior to kickoff. Some washed their fears away with booze.

And now begins Mack Brown's assault on my liver #HookEm

But not everyone was so dark. Mr. McDonald's comment, reproduced below, was one of the more insightful and accurate predictions that I have seen.

The Longhorn defense looked a little shaky on the first few plays of the game. It would be the last time during the day where this was true. But at this point, no one knew that today, the Texas D had come to play.

And I see our defense hasn't gotten any better. :( #HookEm

The Longhorns defense really does have the worst pursuit angles...

You cannot really blame people for thinking the way they were about Greg Robinson's group. But just minutes later, the Texas defense came alive, stopping the terrifying Trey Millard behind the line of scrimmage, and then getting a little lucky when OU's Brennan Clay dropped a sure touchdown on third and four.

#Longhorns defense did not look impressive, but they didn't allow a touchdown, so it's tied at 3.

Things still remained dark for another series. Texas drove the ball well, but then running back Joe Bergeron fumbled the ball at the 23 yard line, prompting this confusing statement.

Time for bergeron to never play again #hookem how many fumbles is that now? Wouldn't trust him with a baby #pathetic

Things seemed bad, but they were about to change.

When Texas defensive lineman Chris Whaley dropped back into coverage, intercepted a Blake Bell pass, and took off running towards the endzone, my mood shifted. My annual humiliation ceremony known as the Texas-OU game had been cancelled. Self-loathing was not to be a part of my Saturday. Today would be different.

Not long after, when Case McCoy dropped a ball out of the sky into Marcus Johnson's hands for a 59 yard touchdown putting Texas up 17-3, things were just fine.

For as much crap as we give McCoy on this blog (and I have given him my share), we also have to recognize that he has now been the winning quarterback in two of Texas' most important and memorable wins of the last three years. His duck-like slow-motion scramble will always be the play that we remember from the win against Texas A&M in 2011. And while in this victory the Whaley touchdown, or perhaps Daje Johnson's drag-race punt return, are more likely to make future highlight reels for the Red River Shootout, Case McCoy's two touchdown passes are deserving candidates as well.

Of course, McCoy did throw a startling interception that briefly gave OU life in the second half, but on the whole, this was a good day for him.

This game has featured every element of the Case McCoy Experience.

But now we find ourselves in a peculiar place. Texas is 3-0 in the Big 12, and just coasted to a win over Oklahoma. And yet, much of the season has been ugly.

No. Mack cannot keep his job. He can retire with his dignity and an OU win. #HookEm #OliviaPopeStyle

Texas fans have to learn to deal with apparent contradictions. The team played poorly, and then well, and it will probably play both poorly and well again some time over the course of the season. Mack Brown won a championship at Texas and rebuilt Texas into a powerhouse. And Mack Brown has been the coach who watched as the program slipped from its high perch, and is now just another football team. And now Mack Brown has beaten OU in a game he was not supposed to win, something that contradicts previous history.

But these aren't contradictions -- not really; this is just how life works. Sports teams and seasons seldom follow a clean narrative, simply because not much else in life does either. This never stops anyone from trying to cram a team or season into a narrative, but we always have to keep in mind that this is our construction. It is artificial.

Man I sure hope @jeffchaley picks me as one of his twitter recap samples on Monday.