Texas is now 1-1 this season in games delayed by lightning.

Weather delay in Fort Worth. Awesome. The last weather delay went real well for us. #HookEm

Omens are terrible things. Dark skies and lightning make for one hell of an omen, particularly for Longhorn fans still scarred by the disaster in Provo.

But not for those of us who have spent the better part of two weeks in Germany. For those of us, back in the Eastern time zone for just 48 hours and still adjusting to life at UTC - 5 hours, a multi-hour weather delay can mean only one thing. Bedtime.

At the edge of sleep, contemplating how many Case McCoys could dance on the head of a pin, I knew I was done. No stimulant was powerful enough to pull me through.

So I went upstairs to bed. The Longhorns took care of business without me.

I wasn't the only one who didn't last the whole game. My search captured less than 7200 tweets. This is much lower than what we have seen in recent weeks, even though because of the delay I extended my search period by several hours. After the lightning delay, traffic dropped off significantly. Negative tweets were hard to come by. 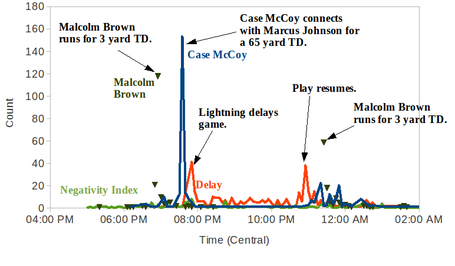 Impressive #Horns can compete in D1 football games with McCoy who should be pounding Blatz and playing intramural flag football. #hookem

I am growing oddly fond of Case McCoy. Once or twice, I might have called his supporters troubled cultists, but I have moved past that point.

McCoy is growing on me precisely because, despite his limitations, he is succeeding. I don't believe in the moxie-will-to-win mystical nonsense that sometimes is used to explain McCoy's successes. But sometimes it is fun to root for the cocky underdog.

Sky begins to illuminate in distance. Lightning could mean delay. For now, only lightning strike at stadium is McCoy to Johnson. 17-7 #Horns

#Longhorns players told to stay off their feet, so Case McCoy is wheeling around tunnel on stool. Looks like players are getting antsy.


The Texas defense has made believers out of us

Okay, this #Longhorns defense is legit. Still, if Mack Brown did the right thing at the end of last season, #Texas would be undefeated.

It is easy to say that Texas could be undefeated right now if Mack Brown had replaced Manny Diaz in the off season, but this is simply because it is easy to say almost anything. We cannot go back and replay things this way in order to find out. So we just won't know if it is true or not.

But I am sceptical. This scepticism is based on several things. First, It is not like Texas lost a single game; Texas was whipped twice, by BYU and Mississippi. Neither game was particularly close.

Second, in case you haven't noticed, going undefeated is really hard. Currently only seven of the 125 FCS schools remain undefeated. And we know that over the next month, most of these seven are likely to lose. Given how poorly Texas played earlier in the season, on offense as well as defense, it is hard to believe that the only thing standing in the way of the Longhorns being the eighth undefeated team is a sub-par defensive coordinator.

Still, one thing I think we can all agree on is that for the last two games, the Texas D has played rather well.

and now I can finally sleep #HookEm