Texas WR Marcus Johnson is the Master of the Wheel

Share All sharing options for: Texas WR Marcus Johnson is the Master of the Wheel

Just call him the Master of the Wheel.

The break-out party for Texas Longhorns sophomore wide receiver Marcus Johnson came against the Kansas State Wildcats with five catches for 70 yards, as he helped convert big third downs on smash routes and pulled in the sideline catches at which he excelled in high school in a superhuman way.

After a quiet game against Iowa State, the Red River Rivalry turned into a wheel route party with his man-beating race up the sidelines after his break to the flat from his inside receiver position.

Since the same two-receiver route wasn't going to work against the two-read principles of TCU, play caller Major Applewhite had to made some adjustments to the route combination against the Horned Frogs.

The first thing that he did was to use three wide receivers to the field side and work on confusing the coverage of the free safety and the cornerback, while still occupying the free safety on that side of the field.

Here's the coverage that TCU was using: 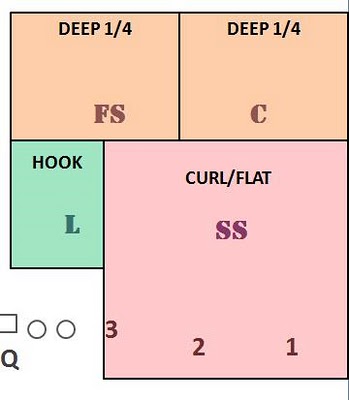 Jaxon Shipley carries the linebackers with him and occupies the free safety with his go route, while both Mike Davis and Johnson head into the curl/flat area of responsibility for the strong safety -- Johnson with a route that appears headed to the flat and Davis with his short, inside-breaking route.

Now, the Longhorn Network team here blames TCU strong safety Sam Carter on this play for getting picked by the in route of Mike Davis, as did the broadcast. However, Gary Patterson's rules for this play indicate that the cornerback has to call "in" for the free safety as the No. 2 receiver Johnson vacates the flat area for which Carter was responsible. That call indicates that the cornerback, Kevin White, is passing off Davis to Carter and taking care of the deep threat from Johnson as he wheels down the field.

Since White has responsibility for the deep quarter, he can't follow Davis into the coverage area of Carter. Now, Carter seems to recognize the mistake by White pretty quickly, which allows him to chase the play, but it's clear from the reaction of head coach Gary Patterson after the play which player was at fault.

That would be an unhappy White getting an earful from his head coach, presumably for abandoning his deep 1/4 responsibilities.

The brilliance of the alteration in the same wheel principle that worked against Oklahoma is specifically attacking an area of responsibility exchange while still picking on the more vulnerable TCU cornerback, and it produced a game-changing play for Texas.

In all, the Horns had five big pass plays of 20 or more yards, with Johnson turning in two while catching three total passes for 120 yards and the touchdown. All three of the League City Clear Springs product's catches came on third downs for big-time conversions, with his first catch on a pivot route to convert 3rd and 8 the first third-down conversation of the game for Texas after missing on the first four.

A knee injury in fall camp turned out to be nothing more than a sprain, which set back a player who had been making a move on the depth chart with Davis and Shipley both limited by injuries suffered before the start of camp. Fortunately, Johnson didn't have to miss significant time, and was able to return to full speed by early in the season.

It's been a major development for the Longhorns, as Johnson has shored up depth and provides a reliable target capable of getting open on intermediate routes and the wheel route that is quickly becoming his trademark.

Not only was the wheel route a favorite play call of Brad McCoy when his son Case was playing for him, but the youngest McCoy also had plenty of time to work with Johnson last season as the two developed chemistry working with the second team.

"That started long before the Kansas State game when he showed up," said McCoy. "He's been a guy that has an incredible story, is a hard worker. He loves the game. I've been fortunate enough with him timing-wise, I've been throwing to him a long time. We've both been backups. We've been practicing together for several weeks."

More than simply timing with McCoy, Johnson has been known since his high school days as a player who works hard on perfecting the nuances of the game. The word is that he's struggled to add mass to his upper body in an effort to beat press coverage more consistently, but it hasn't mattered on two of the biggest pass plays for the Longhorns this season.

"But Marcus is a solid player. He's a solid football player," McCoy said. "He loves the game. He's going to give you 100 percent every time. I think that's why I love him being out there. I know if he's out there, he's going to give it all he has.  If he can't, he's not going to be out there. That's his mentality. That's kind of spread throughout this team from several different players, is having that mentality of, 'You're getting everything I got all the time.' That's well-respected in the locker room."

Johnson is also quickly becoming a fan favorite on a route that has more than its own share of followers as defensive coordinator watch those plays on film and start spending time making sure that they don't get beat on it, too.