With the retirement of Mack Brown, now is a good time to take a look back over the last 57 years of Texas football.

Share All sharing options for: Context for the Mack Brown era through graphing Texas football since 1957

Over the next few days, there will be many Mack Brown retrospectives written. Most won't come with a graph. Because of this, I thought it would be worthwhile to prepare a visual aid for you as you read all these pieces about the recent and not-so-recent history of Texas football. Consider it a way to reality check what you read.

My objective in making this figure was simple -- I wanted to track the relative strength of Texas football over time, as well as the changes in the strength of Texas' in-conference competition. I thought about plotting something like winning percentage by season, but winning percentage doesn't help me look at the conference, and tends to do a poor job of graphically highlighting the ebbs and flows of Texas football.

So I settled on something else. I decided to use the Simple Rating System, or SRS for short. The gory details of the math behind the SRS are shown elsewhere (and they aren't terribly gory), but you don't need that to understand SRS.

SRS attempts to measure in a simple way how many points better or worse than average a team is. So a team with an SRS of zero is considered average; this year Marshall represented the average FBS team, whereas in 1957 it was Boston University. Florida State is currently the highest-rated team by SRS, 23.7 points above average. In 1957, the highest-rated team was Michigan State, with an SRS of 23.8.

SRS isn't perfect of course, as no system can be perfect in an imperfect world, but SRS has the advantage of being pretty good and available going back many years at Sports-reference.com.

Using Texas' SRS ratings, along with SRS values that track changes in Texas' conference competition, I made the graph below:

-- The orange line shows Texas' SRS rating as a function of time, starting from 1957, Darrell Royal's first season as head coach. The graph goes up through the 2013 season, although bowl results are not included (that would require a highly accurate crystal ball). 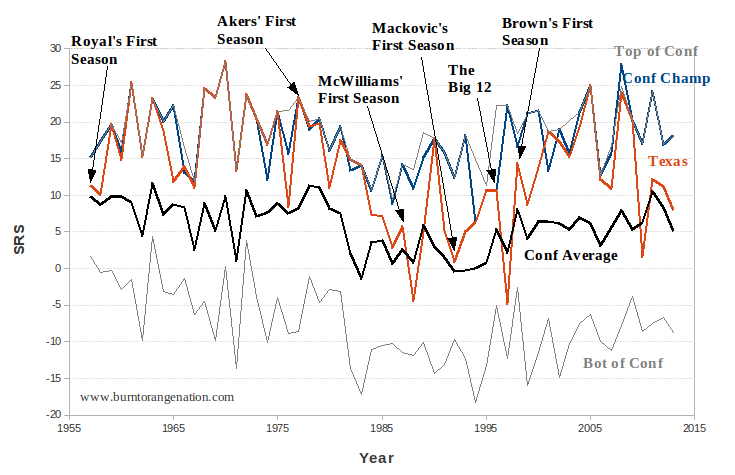 The graph nicely shows the ebbs and flows of Texas football since 1957, when Royal took over. By his third season, Royal had the program on course, competing with the best of the SWC for conference (and national) championships.

During these early years, the SWC was rather strong. Teams that score in the 20s for SRS typically are national championship caliber, and in more seasons than not through the 1960s and 1970s, the SWC had at least one team this good. Quite frequently, one of those teams was Texas. This was the golden age of SWC football.

After a sub-par season in 1976, Royal stepped down, and Fred Akers took over the program. Four of Akers' five first teams were outstanding, but after the early 1980s the program began a decline that was partly masked by the overall decline of the SWC.

By the time David McWilliams took over as Texas head coach in 1987, the SWC's days as a power conference were over. McWilliams squeezed one strong season in amongst four middling to lousy ones, and in 1992 gave way to John Mackovic.

While the team wasn't really any better under Mackovic than it was under McWilliams, Texas fans at least had a bit more fun in those days, as Mackovic managed to win a few conference championships against some mostly awful SWC and pretty decent Big 12 teams. In 1994, Texas finished 4-3 in the SWC, which was good enough to earn a five-way tie for best in the conference. Of course, this tied championship was made possible only because Texas A&M, which went undefeated in conference play, was not eligible for the conference title.

In 1995, Texas won the final SWC title outright, with an SRS of 10.7. In the SWC of 1970, this would have probably been good enough for a fourth-place finish, but in 1995 it made you conference champions.

The SWC's time had come. It was not a healthy conference. In the first year of the Big 12, the Longhorns again won the conference title with an SRS of 10.7. But at least this time, they had to beat the powerful Nebraska Cornhuskers to do it. After that came the disaster of 1997, which brought Mack Brown to campus.

It took several seasons, but by his fourth year Brown had Texas competing among the conference elite, a conference elite that was nearly as strong as the great SWC teams of the 1960s. (The old SWC was far better at the league bottom, as the worst Big 12 teams were not much better than the worst SWC teams of the 1990s.) From 2001 through 2009, Texas football was not as good as it had been in the 1960s, but it was pretty damn good. A national championship and a second title game appearance were trailing indicators of program quality over this period.

And then 2010 happened. Coming off the national championship game, Texas registered only the second single-digit SRS of Mack Brown's tenure and the third-worst SRS on this graph. From 2010 through 2013 Texas has hung near the single digits for SRS, much as it did in the late-Akers, McWilliams, and Mackovic periods.

Which brings us to now. As Mack Brown prepared to retire, Texas will once again strike off with a new coach. How well will he do? Some day, the graph will be able to tell us.