Sure, missed tackles were a problem in 2012, but was it as bad as it was made out to be?

Wailing, moaning, gnashing of teeth, and rending of garments.

Texas Longhorns fans engaged in all these practices to a high degree during the 2012 football season, when it seemed as if the defense led by Manny Diaz was incapable of bringing opponents to the ground at all.

It was indeed painful, with a number of high-profile plays that featured missed tackles.

There was the first big incident, the harbinger of doom, the collision between two defensive backs that led to an 82-yard Robert Herron touchdown for Wyoming in the season opener.

There were the various other comedy of errors engaged in by Carrington Byndom and Adrian Phillips as they worked together to do their best Keystone Kops impersonations.

The missed tackles from Mykkele Thompson and Phillips as Oklahoma fullback Trey Millard hurdled the former and broke a weak tackle attempt from the later provided one of the painfully enduring images of the 2012 version of the Red River Massacre.

On and on. And then on some more.

But compared to the rest of the conference, was Texas really so terrible? A graphic on the Longhorn Network during the Orange-White game provides some perspective: 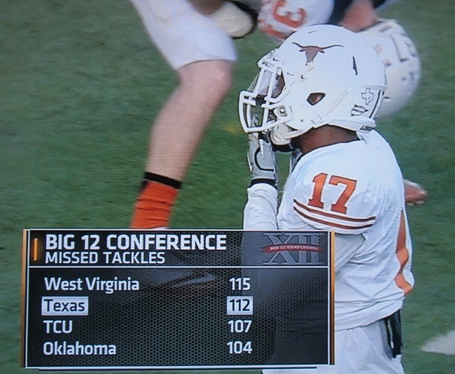 The difference between Texas and TCU in terms of tackling was only .4 missed tackles per game, not a huge difference. West Virginia was worse, while Oklahoma was hardly solid in that regard, despite featuring a pretty veteran defense, especially at the second level.

What's interesting is the difference in how those missed tackles were perceived.

The missed tackles for TCU and Oklahoma weren't prominently mentioned as a huge deal for both teams, at least in regards to the widespread narrative about those teams.

The coaching ability of Bob and Mike Stoops and Gary Patterson wasn't questioned because their players had trouble bringing down opponents, though many wanted to use the tackling troubles of Texas to continue the "Texas is soft" meme. And that's fair, says Mack Brown.

Now, the difference in the three teams may have been the yards given up after missed tackles, a statistic that isn't widely available. The Longhorns certainly seemed to give up yards in massive chunks after failing to bring down opponents. It was a big problem, that much is not in question.

Still, there was improvement late in the year, as evidenced by only two missed tackles against Oregon State after the 15 bowl practices.

And perhaps a little more perspective is needed in regards to the 2012 Texas defense, sometimes called the worst in school history, a description that is something of a misnomer.

Yes, the defense gave up more yards than any other defense in school history, but this is not your grandfather's version of college football with the proliferation of fast-paced spread attacks that rack up yardage against even the best defenses. And using raw stats like total yards is truly for losers.

Consider that the Texas defense finished in respectable spots in some important advanced metrics that actually include context, something that the raw numbers simply cannot provide.

In the FEI ratings, the second defense coached by Manny Diaz in Austin finished 38th in the country, in large part because the defensive strength of schedule was fourth in the country. Only Oklahoma, Kansas State, and West Virginia faced a more difficult road defensively. See a trend there?

In the S&P+, the 'Horns were even better, finishing 32nd in the country in that advanced metric that is billed as an OPS-like measure for football.

Viscerally, the Texas defense in 2012 was a train wreck, an absolute disaster. Getting past the emotions brought to the surface by all those well-documented mistakes by getting into the pure numbers, into the context, tells a story that isn't quite so tragic.

Especially because the defenses operated by well-regarded defensive coaches in the same league had similar tackling issues.

With all that said, you may now return to your regularly scheduled wailing, moaning, gnashing of teeth, and rending of garments regarding the Texas run defense.