Blame it on Manny? Not so fast, says the former Longhorn star.

Now lighting up opponents of the New Orleans Saints, former Texas Longhorns safety Kenny Vaccaro has never been hesitant to share his opinion, especially with his teammates in the heat of the battle.

Whether Vaccaro's leadership style was actually effective or merely encouraged finger-pointing with last year's team has been up for debate this fall, but his recent comments about the firing of defensive coordinator Manny Diaz last weekend to the Times-Picayune are worth discussing.

"I'm being real honest about this," Vaccaro told the New Orleans newspaper. "I don't blame the coach. I blame the players, honestly. I think [Diaz] is a good coach and I think the mentality at Texas isn't where it needs to be right now."

That was Vaccaro's summation of the situation after discussing the effectiveness of the scheme Diaz was running last week against BYU.

Of course, it's not exactly news that this Longhorns defense is soft -- it was soft for much of last season, when trust broke down and the effort flagged as a result, problems that Texas players claimed they had solved heading into the 2013 campaign, but the remarkable thing about Vaccaro's comments are just how much they indict the entire program.

Here are the rest of Vaccaro's comments about Diaz:

The former Texas safety essentially echoed what Diaz said after the game, when the defensive coordinator basically defended his gameplan and laid the blame on the players who didn't effectively execute his plan, which is of course his fault, too.

He's not coaching the wrong things. Everything he teaches will help you succeed on defense. It's not like he's teaching stuff that's unsound. I don't blame him on all of this stuff. I blame maybe some of the recruiting and some of the type of players they're bringing in. I blame the mental, the attitude about it.

One could probably quibble with the soundness of what Diaz was doing in certain situations, like all-out blitzes with a group that struggles to understand a basic principle like playing contain: 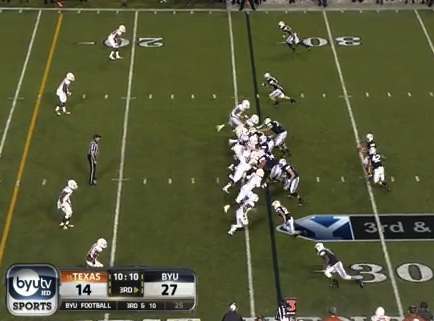 This is at least reckless, right?

In any case, Vaccaro's blaming Mack Brown for bringing in players who aren't tough enough and then calling the players out for not being tough enough themselves. So yeah, pretty much the definition of putting Brown and the players on blast. Dude has never been so big on the censoring himself thing.

But back to the leadership questions -- so far, there hasn't been any talk about any of the senior leaders stepping up and holding a players-only meeting or generally voicing their displeasure about what happened last week. As they did last season, and as they did against BYU, they collectively seem more than willing to let things continue as they have.

Mack Brown's best teams have always relied on locker-room enforcers capable of scaring everyone else into line -- Roy Miller, Brian Orakpo, and Sergio Kindle all come to mind.

Perhaps defensive end Jackson Jeffcoat doesn't have that mentality. Perhaps no one wants to listen to safety Adrian Phillips talk about being tougher as he continues to struggle to make tackles and takes terrible angles to the football. And cornerback Carrington Byndom? He hasn't exactly shown a lot of physicality himself, allowing a New Mexico State wide receiver to drive him 10 yards downfield on a block in the opener.

Maybe if Mack Brown could effectively challenge their collective manhoods, he could inspire some pride in his defense. Then again, he's much more likely to transfer his anxiety, which helps explain why Phillips said several weeks ago that the defense would suffer "panic attacks" last season.

Maybe a Xanax prescription for the defense would help take care of the Mack Brown-induced anxiety, but that doesn't solve the toughness issue.

How about testicular transplants for the defense? Texas can afford that, right?