This team will drive a man to drink.

Share All sharing options for: Texas Longhorns Football Twitter Recap: The burnt orange apocalypse and a sense of impending doom

It is strange walking around all Saturday with a sense of impending doom. Thankfully, the good people at WebMD are here to help us understand the source. Using their helpful Symptom Tracker tool, I was able to learn that there are an assortment potential illnesses that could have been responsible for my problem. I could have been dealing with ailments such as generalized anxiety disorder, having a panic attack, experiencing an allergic reaction, suffering a pulmonary embolism, or going into anaphylactic shock. Or perhaps I just have epilepsy.

Truth is, I am suffering from a sub-clinical infection known as Mack Brown Texas Football (or MBTF for short). Perhaps you or a loved one is also struggling with this disease. While there is no treatment currently available, temporary relief from the symptoms is possible with a variety of patent medicines. I find a few drops of Angostura bitters do the trick; my preferred method to take them includes sugar water and 75 cc of rye whiskey.

Twitter activity was at approximately the same level as Texas' week one game against New Mexico State. This week the hate machine recorded 13,700 tweets using my standard search.

The basic flow of information is illustrated in the figure below. The negativity index (blue line) counts the appearance of a few selected terms, which I have found track changes in fan sentiment. The number of tweets referencing Mack Brown (red line) and Case McCoy (green line) are also plotted in the figure below as a function of time. 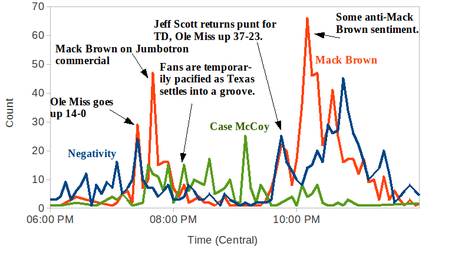 There was some grumbling at the start of the game, as reflected by the negativity index early on. But the anger really started to focus at around 7:25 PM central time, when Ole Miss went up 14-0. Much of that anger was directed at Mack Brown.

Who's Mack Brown going to blame this week? #Longhorns #texasolemiss

I hope Ole Miss scores 60+ points on us tonight. Goodbye Mack Brown, thanks for the years that we were great! #HookEm

About 15 minutes later, Mack Brown made a well-timed appearance on the Jumbotron.

Fans actually booing Mack Brown on the Jumbotron during a PSA. Times they are a-changing. #horns #hookem

It will be interesting to see if in-stadium commercials with Mack Brown continue for the remainder of the season. I cannot imagine that Deloss Dodds enjoys looking down from his tower atop Mount Doom as an angry proletariat boos goods and services endorsed by his coach of choice.

By 8:00 PM, Texas fans settled down as Case McCoy and the Texas offense started to move the ball and the Texas defense put together a few stops. This is reflected in the graph above, where from approximately 8-9:30 PM the negativity index dropped to almost zero.

CASE MCCOY!! #HOOKEMHORNS and THANK U GREG ROBINSON!!!!!!!!! LONGHORNS TAKE THE LEAD!! BEEN A WHILE

During this time, we even saw a brief return of the old Ash v. McCoy debate of 2012. It seems almost quaint, now.

But this period of uneasy peace between Texas fans and Mack Brown was short-lived. At 9:45 PM, when Jeff Scott returned a Texas punt for a touchdown, everything went to hell.

How is Texas defense SO awful. WOW Mack Brown you are TERRIBLE. Just proves how good Vince Young really was. #Texas #Longhorns #Hookem

I predict that the following prediction is wrong.

I predict that Mack Brown and the DC will be fired on Monday. Longhorns look bad.

For years, Texas offensive coordinator Greg Davis served as Mack Brown's human shield, absorbing the ugliest remarks from the Texas fan base. For the last season or so, this role has been occupied by Manny Diaz. But now Diaz is out, and Mack Brown is all alone.

So who's your scapelonghorn this week Mack? #horns

Chris Hunt probably summed things up the best at the end of the game.

Good god this feels like the Burnt Orange apocalypse... #hookem

Holy crap this is going to be a long season

We are now only three games in to the 2013 Texas football season, and we have already achieved post-OU rage levels. I am not sure how much angrier and uglier things are going to get. Will Texas fans reach a saturation point, or can they go even further than this?

I am honestly curious to see if Texas fans remain engaged and angry, as they have through the first three games. Or will fans instead check out and spend their Saturday afternoons and evenings this fall doing something else? The truth is that we will probably see some of both, but it is going to be hard for people to stay mad from now through December when they can just choose instead to shut off their TVs.

The season is not over. There is still time to improve, and Mack Brown is still technically correct when he entertains the possibility of winning the Big 12; the Longhorns have not yet lost a conference game.

But let's be clear; this is just a bad football team right now. The defense is miserable, while the offense offers few serious threats to opponents. It is easy to envision a future that consists of horrific beatings administered by most of the rest of the Big 12.

So yea, Coach Brown, you still don't have a conference loss, and can still technically win the thing. But don't blame us if we don't fully buy in to your vision.

And how was the play, Mrs. Lincoln?

On the bright side at least McCoy didn't throw an interception?!?! #HookEm