Will Sams set his career high for rushing yards on Saturday?

"Daniel will play this week. I think that is quite obvious."-- Kansas State head coach Bill Snyder

And Daniel would be redshirt sophomore quarterback Daniel Sams, the Kansas State Wildcat back up who ran for a career-high 77 yards on a career-high 11 carries last week against UMass when starting quarterback Jake Waters proved ineffective.

Sams was an irregular contributor last season in a mop-up capacity, mostly coming in for former starter Collin Klein at the end of blowouts, amassing 235 yards and three touchdowns along the way.

He also competed for the starting job during the spring and fall before Waters eventually nudged ahead of him during the fall, but the Iowa Western product has mixed good moments with bad -- while he was efficient during his debut against North Dakota State, completing 21-of-29 passes for 280 yards and two touchdowns, he's thrown five interceptions in his 70 attempts (a 7.1% interception rate) and connected on only 5-of-10 passes last weekend against UMass.

All that has opened the way for Sams to make a significant mark on Saturday, if not more permanently, given the Texas struggles against the quarterback run game and the zone read in particular. 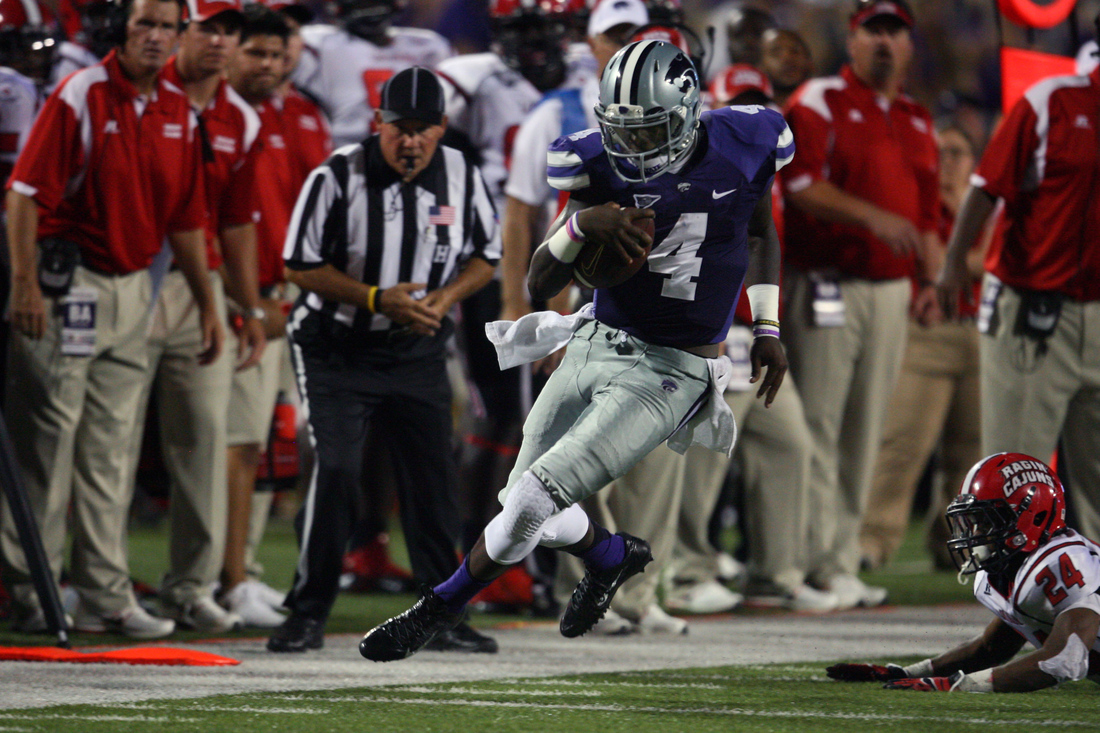 So who is Sams?

He's a Slidell (La.) Salmen product who was ranked as a consensus three-star athlete out of high school in 2011 before redshirting his season in Manhattan. He chose the Wildcats over offers from Miami, Oklahoma, and Tulsa. Listed as a 6'2, 207-pounder, if there's good news for Texas, it's that he's about 15 pounds or so lighter than BYU quarterback Taysom Hill.

The bad news is that Sams is more athletic overall than HIll -- he has a longer stride and is faster on the top end than the Cougar signal-caller, though his listed 40 speed of 4.33 on his Rivals page is probably about as accurate as most reported, unverified times, which is to say, not at all accurate.

In his debut last season against Southwest Missouri State, Sams was quite electrifying, carrying the ball three times for 61 yards, including a 47-yard touchdown run that featured a broken arm tackle and good vision to find the end zone. All three of his carries in that game came on quarterback draws, a play the Wildcats featured heavily and effectively with Klein at quarterback.

Sams didn't see much action against North Dakota State, which Bill Snyder may have regretted, but did make a difference in the Louisiana-Lafayette game early in the second quarter here on that quarterback draw again.

Notice how Sams runs behind his pads despite his size -- making him difficult to tackle for smaller defenders flying by who don't square him up. And squaring him up is hard when he can make the type of full-speed lateral slide move that he did on about the 11-yard line to turn the corner and find the end zone.

Yeah, that's scary -- he might have been a three-star athlete, but he truly has four-star athleticism. It might not even be a stretch to say that he'll be the best athlete on the field when he goes against Texas this weekend.

Obviously, the expectation is that Sams will add the zone read to his arsenal for the contest on Saturday night. Whereas BYU ran the play with the running back handling the dive and the quarterback on the edge -- with the exception of the first drive of the second half -- Ole Miss ran the play with quarterback Bo Wallace on the dive and the diminutive but speedy Jeff Scott on the outside, only mixing it up a handful of times.

Kansas State feature back John Hubert, a Waco product, is of a similar size to Scott, though he's not quite as dynamic of a runner, so he'll probably operate outside most of the time. However, Sams is certainly athletic enough that he can take the edge as well.

Expect a healthy mix of both versions of the zone read, along with the quarterback draw.

In 2010, Collin Klein only threw the ball four times for nine yards against Texas as Kansas State rushed for 260 yards.

If the Wildcats only have to throw the ball four times this weekend, the Horns will be in trouble. And Sams will probably have a career-high rushing total to go along with it.