Romance is in the air in Austin.

This week, the Nick-Saban-quick-fix Texas daydreams were given run at major media outlets. You have already read the story; a Texas regent spoke with Nick Saban's agent a few months ago. The smouldering love-fire that many Longhorn backers have for the tiny coach in Tuscaloosa had been doused with petrol.

But now let's do some deep breathing. This probably isn't happening. It is important to remember that Nick Saban is approximately two months younger than Mack Brown. (Nick Saban's birthday is Halloween. Seriously.) Both men are at an age where most people start contemplating retirement. So when Saban says that he is "too damn old to start all over" at a new school, we should at least consider the possibility that he is telling the truth.

On the other hand, what else is he going to say -- "hell yes, I will go to Texas if they give me enough cash?" That would likely create a problem with his present employer.

After Texas' win over Kansas state this week, there was a lot of talk about how Mack Brown had "saved his job" with the victory.

I am a bit puzzled by this talk. Here are two possible interpretations of what people are saying:

1. Mack Brown was likely to be fired immediately after a Kansas State loss, but now he keeps his job.

Both if these statements sound like total nonsense. Did anyone actually believe that Mack Brown would have been fired Monday morning if Texas had lost 40-14 Saturday night? Likewise, are there people who now feel that this game, taken by itself, will dramatically alter the post-season discussion of Brown's future as the head coach of Texas?

And yet, there were quite a few tweets expressing these views, including the one above from what appears to be a community newspaper in Eagle Pass, Texas.

Damn computers. On Saturday night, I fought with various aspects of the system that I use to capture tweets as they occur. Until around 7:45 PM central time, I didn't have much to show for it. From that point on, I captured a bit more than 11,000 tweets related to the Texas game. The results are summarized in the figure below. 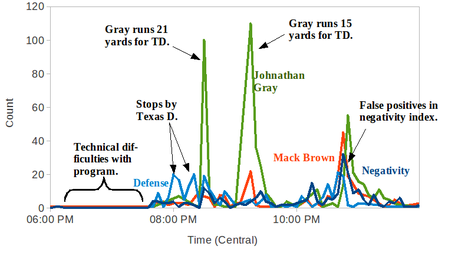 The negativity index did some odd things at the end of the game. It mostly turned up a bunch of false positives (or false negatives perhaps -- English is hard).

To understand why this is, you need to know a little bit about how the negativity index works. I have flagged a selection of words that are typically associated with negative fan sentiment. The negativity index simply counts the number of tweets that contain one or more of these terms.

For example, it turns out that the Lord's name is mostly used in vain when it comes up during tweets about Texas football. This is why the following tweet ended up counting in the negativity index.

praise jesus for a win! #hookem

I had to look it up. Apparently, Periwinkle is Tinkerbell's sister.

Ugh. Ash out. Case McCoy is our guy. This will get out of control and we'll be lucky to live through it. #Longhorns

For the most part, the members of the mystery cult of Case McCoy have either renounced their leader, or have gone deep into hiding. But there are still a few that surface from time to time.

David Ash is a joke. Keep McCoy the rest of the season. #DavidTrash #Longhorns

The threat of this terrible organization is not what it once was. At this point, few buy their rhetoric.

WTF. Keep this up and Mack might stick around longer; can't do anything right. #hookem? #Texas #UT

Brown has reached a point with Texas fans where even when he wins, he just can't win. For just one example, let's look at the next two tweets together.

Ash played the whole first half and then can't play the second? That's why Texas won't win another big game under Mack. #Soft #HookEm

So did Mack try to save his job by playing a QB with a concussion? #horns #texas #CFB

But not everyone's heart has hardened towards Brown. For Kansas State Coach Bill Snyder the flame still burns, as we all witnessed when the two shared a tender moment at midfield after the game.

For those in burn-everything-down mode, not everyone is quite there with you just yet.

I'm not ready for the creative destruction fueled approach to this season that ends w/ Mack Brown getting canned. Go Horns! #hookem