Was the Kansas State game a breakout performance for the offensive line or Johnathan Gray? The answer is both.

Coming into the season, the storyline coming from the Texas Longhorns running backs room was that the group had to be selfless to be willing to split carries.

So far, sophomore Johnathan Gray is the one who hasn't had to worry about that much, as he's carried the ball 39% more than juniors Malcolm Brown and Joe Bergeron. Combined.

"Backs have to get in a rhythm," Gray said after the Kansas State game. "Our line did a great job, like I said, just gave us a chance. We took the opportunity and got yards. They helped us out."

Indeed, Gray found his rhythm against the Kansas State Wildcats with a career-high 143 yards and two touchdowns in what Texas fans are hoping was his long-awaited breakout performance.

The increase in carries doesn't mean that Gray has changed his attitude, though. It's one of the intangibles that defines why the son of the former Texas Tech star back has what it takes in every facet to be successful, well beyond his physical skills.

Early in the game against Kansas State, the 5'11, 207-pounder was responsible for chipping the Wildcat defensive end on the way out of the backfield after a play-action fake. What Gray accomplished hardly seems to fall under the classification of a mere chip -- it was more like a shoulder pancake and will probably be shown on clips in the Texas running back room for years to come. Should be, at least.

As 6'2, 245-pound Ryan Mueller was engaged with Texas sophomore offensive tackle Kennedy Estelle, Gray put his left shoulder into the ribs of Mueller, lifting him off the ground and leaving him crumpled on the turf in pain.

Who says there's no glory for a running back in pass blocking?

Gray didn't just chip Mueller to the turf, though, as he quickly found his feet again and continued his route to help his quarterback.

Gray didn't even touch the ball on his best play vs. KSU

On a night when he set that career high for yardage, Gray didn't even touch the ball on his best play.

Gray did, however, receive 19 carries during the decisive portion of the game, though Kansas State was able to shut him down at the end of the game as the Longhorns essentially gave up offensively with Case McCoy in the game and simply tried to burn enough clock to hold off the Wildcats. Two late fumbles certainly helped in that regard as Kansas State twice threatened to make a game of it.

Note: IZ peel is the basic inside zone play with the fullback coming across behind the formation to block a backside player, typically the defensive end.

If the takeaway after the game was that Gray finally showed the elusiveness that he had been missing throughout his Texas career up to last weekend, there were some positive signs -- after Dante Barnett tackled Gray several times in the open field to limit several runs early in the game, Gray was able to shake him twice, once to pick up nine extra yards and once to find the end zone. Another slide cut nearly got Gray past Kansas State safety Ty Zimmerman and did manage to pick up some extra yardage. 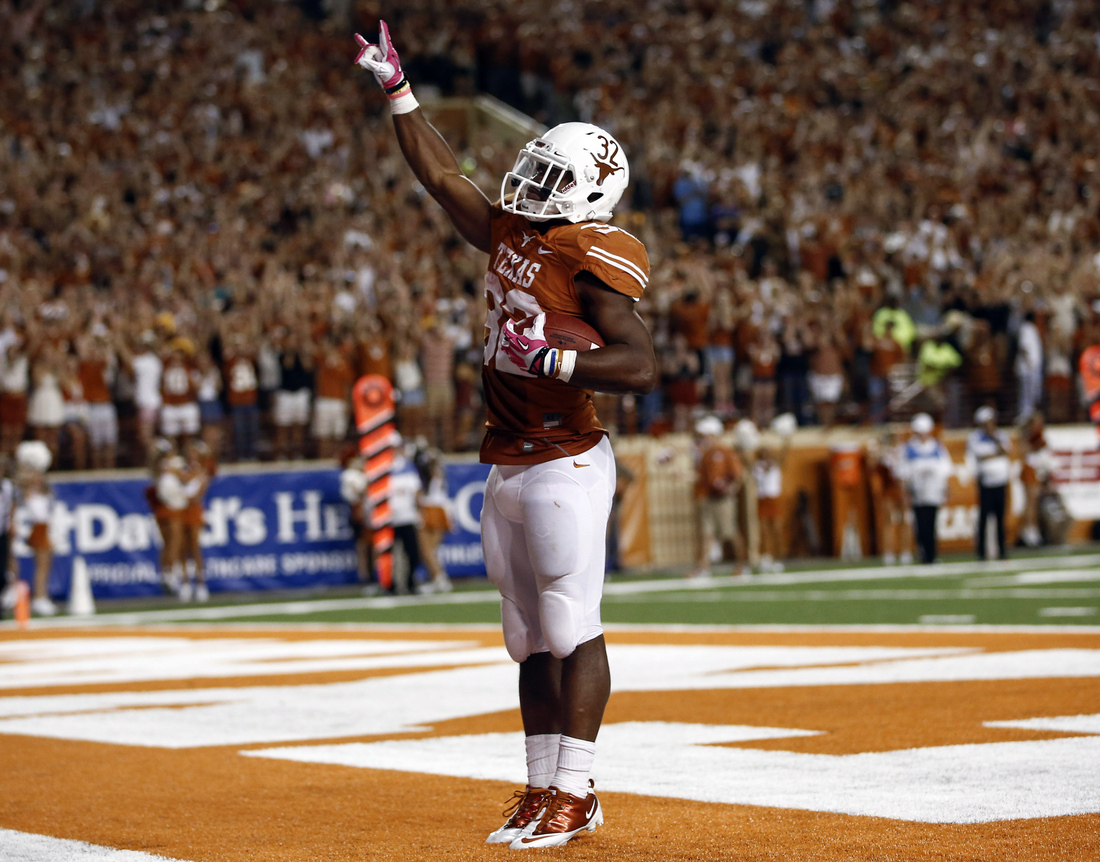 Other than those three runs, though, and the fantastic cut on the touchdown run that included Gray shaking Barnett near the goalline, Gray mostly took what was there for him, using his fantastic vision to make sure that he never missed any open holes.

"I thought it was a great team effort," play caller Major Applewhite said after the game. "I thought we did a good job up front blocking. I thought our backs did a great job in breaking tackles. Our wide receivers, you look on the last touchdown run I believe Malcolm had, the one they ruled wasn't a touchdown, you see Marcus Johnson working on the edge. When you run the ball, the backs get a lot of credit. It's the other 10 guys putting you in that position."

Right now, it's rather a tale of two lines -- the left side that was dominant against Kansas State, aided by excellent performances by senior tackle Donald Hawkins and senior guard Trey Hopkins, whose performance was marred only by a holding penalty on a quarterback draw, and the right side that is a work in progress with Walters a mediocre option, Cochran hurt, and sophomores Kennedy Estelle and Sedrick Flowers filling in at times.

At times in the first half, junior center Dominic Espinosa was also excellent in executing his combos to the second level, as it was one of his best halves that he's put together as a Longhorn.

Last season, the bellwether play was pin-and-pull -- as Longhorn Scott has noted, if Texas could run that play early, they were going to have a successful day. The play this season that may presage a strong rushing performance is inside zone, which Texas is pairing with zone-read and run-pass packaged concepts, including inside zone/bubble screen and inside zone/hitch and, on Swaim's reception against Kansas State, inside zone/stick, a concept that is normally run as stick/draw.

Against New Mexico State and BYU, Texas struggled getting movement on their combo blocks. The adjustment for Kansas State was using more Pistol I with Swaim as the offset fullback, allowing him to peel across the formation to clean up the backside players the Longhorns were leaving unblocked.

Hopkins credited some extra work in practice for the improvement on inside zone.

"The offensive line drills were very competitive this week," Hopkins said after the game. "We really got after each other on the offensive and defensive side of the ball. We did a lot of basic zone run drills, and made sure we were perfect on our technique and that knew how to handle the movements we would see from Kansas State."

And to be sure, the inability to deal with slants and stunts from Ole Miss in the second half -- the only significant adjustments made by the Rebels to stop the Texas running game -- was a major disappointment and one that the group apparently took to heart. There may have even been some hat-throwing in the offensive line room when the Ole Miss film session.

Not quite as successful were the Power plays, two of which were blown up because the playside guard was pushed back into the pulling guard, which will have the effect of throwing off the play's timing every time. The inability of the guards to hold their ground on those plays illustrates just why Seaels wants guards in the 320-pound range to anchor in those situations and create that needed movement on the inside zone combo blocks.

Of course, the mass doesn't help Walters much, but that's more of a leverage/pad level issue.

Another comment from Hopkins raises the question of the unit's upside and whether they can play at a high level against other Big 12 defensive lines, which probably don't have the quality of what Oklahoma and Kansas State put out last year, with the possible exception of TCU, which may be without star defensive end Devonte Fields for a few more weeks.

"It was great to see that the things we worked on really improved, like the run game. It was just a confidence booster in our preparation. It reaffirmed that the things we do in practice are really making a difference, and this will help us continue to push ourselves."

How much of a difference can more practice and preparation make? Where does Desmond Harrison fit into the equation? How much are the reps helping Kennedy Estelle and Sedrick Flowers develop to the point where Estelle could ably replace Cochran if he misses significant time and can Flowers potentially displace Walters as the starter in time?

As Applewhite pointed out, though, the blocking efforts of wide receivers matters, too. Not to mention the solid efforts of junior college transfer Geoff Swaim, who has stepped in with consistent effort as a move blocker.

And since Gray has to use his vision near the line of scrimmage to avoid tacklers rather than elite short-area elusiveness or tackle-breaking power, there are going to be a lot of moments where he can get to where he can pick up all the yards he can before contact, but he's not going to consistently produce a lot more after that.

As a result, Gray's upside is defined by how well his offensive line blocks for him to an extent that the upsides of Georgia's Todd Gurley and Alabama's Todd Gurley are not because they can both consistently produce those yards after contact.

Still, Gray proved last Saturday that he will gain all the yardage available with his vision and showed enough shake to pick up some extra yardage and find the end zone, just as he did in high school.

If the offensive line can keep executing inside zone consistently, Texas may have something with their running game, as long as David Ash is around to provide a vertical threat in the passing game and catch defenses off guard with the quarterback run game.

There are a lot of ifs there, but the Kansas State game was unquestionably a big step forward for Gray and his line.