Before being hired as a Football Analyst for the Texas Longhorns during the summer, new/old defensive coordinator Greg Robinson, who replaced Manny Diaz on Sunday afternoon, had just spent time as a radio analyst and volunteering as an assistant coach for one of his old friends at a high school in California, happily driving 80 miles roundtrip every day just so he could stay involved in football.

Before that, Robinson helped sink the ship with Rod Rodrigeuz at Michigan for those two terrible seasons that represented the second and third years of Rich Rod era in Ann Arbor. The first year, in 2009, Robinson's defense finished 41st in S&P+, though the FEI ratings had them at 60, a bit unusual since those two rating systems don't normally disagree to such an extent. In the unadjusted measurements, things weren't quite as positive -- the group gave up 27.5 points per game and finished 9th in total defense.

In 2010, the Wolverines fell to the bottom of the conference in total defense and last in scoring defense, giving up 35.2 points per game. The adjusted stats bore that out, as well, as S&P+ pegged the Wolverines as the No. 81 defense in the country and the FEI disliked Robinson's efforts as defensive coordinator even more, as Michigan sat 109th in those ratings. Not to mention the fact that the Wolverines gave up 57 touchdowns (111th nationally).

In an attempt to understand what really happened with Robinson at Michigan beyond the numbers, we reached out to Michigan insider Zach Travis, who runs SB Nation's excellent Wolverine site, Maize N Brew.

1. When Greg Robinson arrived at Michigan with Rich Rodriguez, what was the state of the Michigan defense? Did he inherit any talent or was he working with a bare cupboard?

Greg Robinson arrived after Michigan's ill-fated 2008 season that ended 3-9 and was an offensive disaster and the beginning of Rich Rodriguez's long fall from grace. Robinson replaced Scott Shafer -- who coincidentally would go to Syracuse as defensive coordinator to try and clean up Robinson's mess there.

Diaz dumped as DC, Robinson back 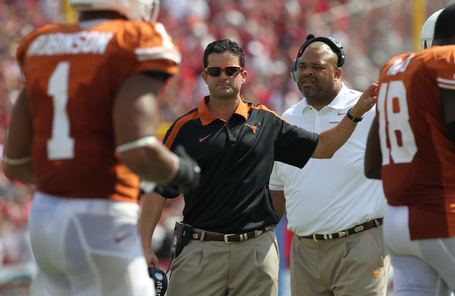 Michigan's defense in 2008 wasn't all that awful, but it wasn't good enough to hold up across from what might have been the worst BCS conference offense in the country. The run defense was solid, holding teams to 136 ypg, but Michigan already had deep-seated issues in the secondary which were first exposed in 2007 against App State and Oregon, to name to obvious examples. Shafer was the scapegoat. Somebody had to get the ax, and he was the only one on staff that wasn't one of Rodriguez's guys from way back in the day.

The 2009 defense that Robinson inherited did have some assets. Mike Martin and Ryan Van Bergen were both sophomores as well as solid players that would only get better with time (Martin is not playing for the Titans), as would true freshman Craig Roh, who started every game of his career despite being a 230-pound defensive end as a freshman.

Jonas Mouton and Obi Ezeh both returned as starters at linebacker, and safety Stevie Brown slid down to the hybrid S/LB spot where he would redeem himself for not having been a very good safety (he is now on the Giants). Also, Jordan Kovacs, Michigan's metronome at safety, was in his sophomore year and the Wolverines had Donovan Warren at corner (he was a five-star recruit and a pretty good lock-down defender).

There was talent and experience coming back on this team, but there were some key deficiencies. Despite being a two-year starter at that point, Obi Ezeh was never a very good middle linebacker, and his read/react skills were atrocious. He ate blocks all day and played on his heels. Kovacs was reliable at safety, but he lacked top end speed, and Michigan had a hard time finding a safety to put next to him that wasn't a dumpster fire.

There also wasn't much depth anywhere. Michigan would struggle to cobble together a solid rotation on the defensive line, and it would go a year and a half before finding someone to replace the ever-more hapless Ezeh in the middle. Michigan also spent those two years hemorrhaging players thanks to injuries, academic casualties, and transfers in a wave of attrition that is still felt on the roster to this day and nearly hit Michigan with APR penalties. GOOD TIMES! 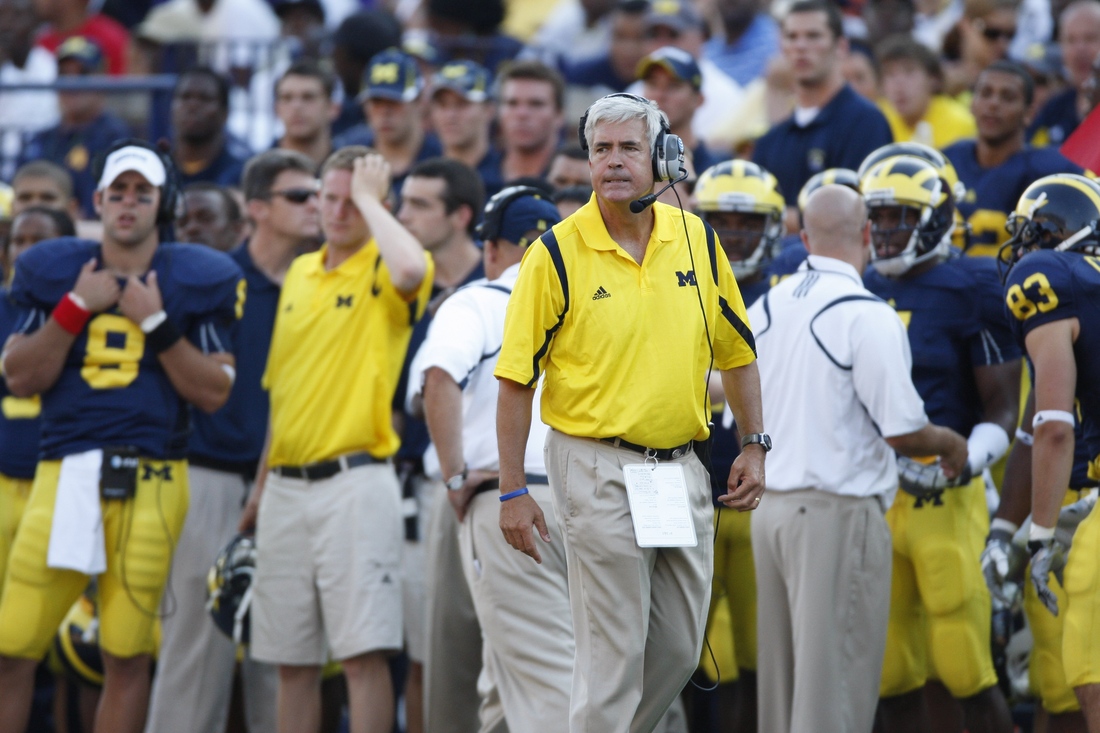 2. Obviously, the Wolverine defense was pretty terrible under Robinson. What was the primary culprit? Missed assignments, lack of toughness, poor schemes and inability to adjust? Was Robinson ever comfortable with the 3-3-5 scheme that Rodriguez brought with him from West Virginia? To what extent can it all be pinned back on Robinson?

Really, it was all of the above. Let's start with scheme. Michigan never really had an identity on defense. The scheme would change game after game with Rodriguez meddling when things got really rough. Sometimes it would be a 4-3, then a 3-4, then a 3-3-5, and by that I mean that you would literally see the defense come out in something different on a game-to-game basis. It was maddening and every tiny sliver of progress was swallowed up by a whirlwind of change. Because of the constant change in defensive philosophy, the players looked lost most of the time. Calling them missed assignments is a kind way of putting it, because at times it seemed like there were no assignments.

Of course, that was when the coaches weren't playing players horribly out of position. Our starting SAM linebacker this year (Cam Gordon) played free safety in 2010 after converting from wide receiver a year before. He was at that time 6'3 and 220 with the speed of a linebacker. This went about how you would expect.

Craig Roh, who was a very good defensive end his last two years under Greg Mattison, was switched to outside linebacker despite having never played the position before and looking like it for a few games. He almost transferred because of it. It wasn't just that the coaches failed to put the proper schemes in place, but often they couldn't even get the right players in the right positions, and even the players felt like they were being jerked around.

The 3-3-5 didn't really become a big thing until 2010, and Robinson dodges some of the blame for that because he obviously had no idea what he was doing. MGoBlog tracked some of the ways in which Robinson's 3-3-5 was obviously run by a guy that had taken a crash course in it and failed, and you get the sense that, at least that year, Robinson's hands were tied to an extent. But Michigan kept running out different variations of it and getting run over by just about everyone. In the second half of the 2010 game, Wisconsin ran 34 plays. Thirty-three were running plays. They scored 24 points that half.

MGoBlog tracked some of the ways in which Robinson's 3-3-5 was obviously run by a guy that had taken a crash course in it and failed, and you get the sense that, at least that year, Robinson's hands were tied to an extent

The defense played as a cohesive whole. There was one main scheme -- the 4-3 under -- and everything built out around that. Players were put in positions to succeed and all the little things like tackling, defensive line technique, and coverage looked markedly better. It looked like a defense. The previous years looked like a fire drill in a second-grade classroom.

3. At some point, Robinson picked up the nickname of Gerg. Did that happen at Michigan and what was the genesis for it, if it did?

As much as I'd like that one to have come from Michigan fans, it predates us. As far as I can tell, it was Spencer Hall (of course) at EDSBS that coined that one and it really is perfect.

[Editor's note: Should have known it was Spencer.]

4. Were there any redeeming qualities of Robinson's time at Michigan, anything positive that Longhorn fans can point to as a reason for optimism?

I'd love to give you something here. I know that we had a lot of hope. We pointed to his stint in the NFL and his success that one year at Texas. We made excuses that it wasn't his fault things went wrong at Syracuse, and that maybe a fresh start back as a defensive coordinator was what he needed. We talked about how we had some talented players to build around and even how he was lucky to be opposite an offense that could possibly cover up his flaws by scoring so many points.

It was all grasping at straws, and I think at this time those are all gone. Gerg has had very little success wherever he went, and when he did it seems like he walked into really great situations where all he had to do was not screw it up long enough for him to step up to another job. Given the problems that Texas has had on defense the last couple years, I cannot possibly imagine this being anything but throwing gas on an already raging tire fire (no offense).

Given the problems that Texas has had on defense the last couple years, I cannot possibly imagine this being anything but throwing gas on an already raging tire fire

For comparison, there are actually a few Michigan fans out there that still have good things to say about Rich Rodriguez and how despite it not working out, he is still a talented coach with a keen mind for the game that walked into a bad situation. If you find any Michigan fan with anything nice to say about Greg Robinson -- and this goes for Syracuse fans as well -- then I will eat my laptop. That person doesn't exist. You're better off looking for Bigfoot. Greg Robinson is universally loathed by our fanbase, and for good reason.

But hey, the man has a pretty impressive head of hair, so there's that.

5. What's your overall assessment of Robinson's competency as a defensive coordinator and do you think he has a chance to perform a quick turnaround for Texas? How would you grade this hire?

Take all of the above as the biased ramblings of a bitter and depressed fan forced to think about the havoc that Gerg caused my favorite team's defense for two years now that his name is in the news cycle again, but I cannot envision a world in which Greg Robinson makes a positive difference to this defense.

It seems like the problems on the Texas defense run very deep, and even if you gave Robinson a full off season in which to work and put his own system in, I still don't think he would be any good. Now, Texas is asking him to walk into a locker room full of players that just got their asses handed to them by BYU -- so much so that the only recourse was firing the last guy to run the defense -- and turn those players into a unit capable of stopping the likes of Baylor, Oklahoma, and the rest of the Big 12. Oh, and he has to do it all before next Saturday when Ole Miss comes to town? This is absolutely asking for disaster. Disaster is Gerg's middle name.

I have absolutely no confidence in this hire. I would grade it an F.

Now, if you want a silver lining, it is this:

I thought Rich Rodriguez was a great hire at Michigan. I thought firing Scott Shafer was the right move and I talked myself into Greg Robinson the first time around. Finally, I was disappointed when Michigan originally hired Brady Hoke.

Best of luck to you. You're going to need it.