So, what exactly happened from Saturday evening to Sunday afternoon. not to mention the early machinations of Robinson's return?

Share All sharing options for: Chronicling the final moments of Manny Diaz and return of Greg Robinson

Some time during the first half of the loss against BYU on Saturday night, former Texas Longhorns defensive coordinator Manny Diaz appeared to tell head coach Mack Brown, "We'll get this fixed."

Diaz never got it fixed and he was out as Texas defensive coordinator hours later.

In the second half of the game, though, in the defining and waning moments of Diaz's tenure as Texas defensive coordinator, BYU inverted the read option to allow Taysom Hill to run inside and Jamal Williams outside, as Williams picked up several chunks of yardage to open the third quarter and Hill scored on a 23-yard run.

The Cougars went on to score field goals on their next two possessions, so while the Texas defense stopped hemorrhaging points as they did in a 17-point second quarter, stopping the BYU offense on the last three drives wasn't enough when the offense failed to score after the departure of David Ash with eight minutes left in the final quarter.

After the game, when asked about the job status of Diaz, Mack Brown said, "I haven't even gotten out of the game. I'd like to watch the video."

It was actually as ominous as it sounded at the time, despite thoughts to the contrary early Sunday afternoon around here. But Brown had never made changes during the season and Diaz was retained after last season, when he could have easily been let go. The head coach had seemed intent on staying the course, living by his narrative of slow improvement.

Brown went and watched the tape on the way home:

Mack Brown viewed gametape on Ipad on plane, watched it again after arriving home at 4:30 a.m. He saw no defensive adjustments. #statesman

That must have been an uncomfortable plane ride, as Diaz said there, knowing that his future was dependent on what Brown say on film. And be all that as it may, it raised a question for one neutral observer: 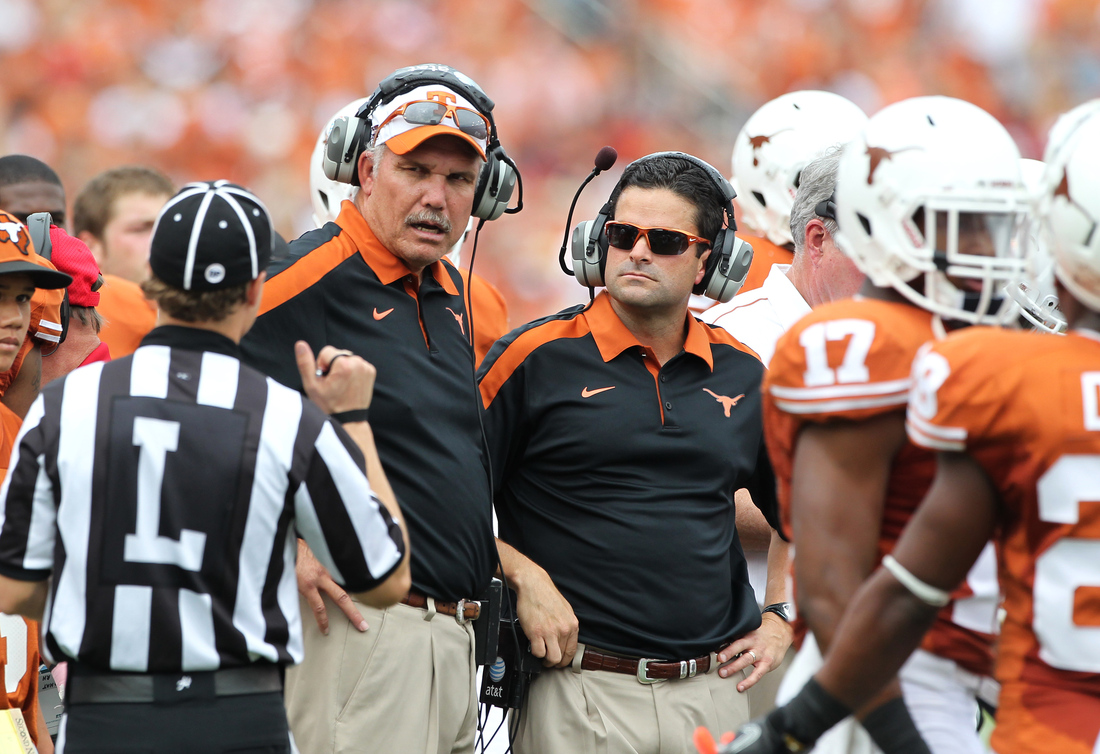 In any case, Brown made the decision to oust Diaz some time after waking up on Sunday (or maybe he never slept), bringing in his relief pitcher from the bullpen -- recently re-hired football analyst Greg Robinson, who had been scouting and self-scouting Texas from his home in California, all while spending just enough time around the Texas program to say he's been around the team "a lot," but all without looking over the shoulder of Diaz. Of course.

"I don't want it in any way for him to feel like he has someone looking over his shoulder at all. -- Robinson at the time he was hired.

Robinson reportedly advised Diaz in his scouting assessment before the game to play with eight or nine players in the box to stop the rushing attack of BYU. Since, you know, Texas had trouble stopping the run last year and quarterback Taysom Hill and running back Jamaal Williams were the most dangerous players on the Cougar roster. The offensive threat was pretty obvious after watching what New Mexico State was successful running -- Robinson's didn't exactly have to be a genius to notice that.

And on the first viewing of the game, it didn't even really appear that BYU had to run the zone read the same way that New Mexico State did. Just, you know, the same zone read that most teams have been running for more than a decade.

Diaz opened in the nickel and couldn't defend the run. And didn't make any adjustments despite saying that he would get it fixed. Then Brown decided to make his first in-season assistant change of his career.

Let's flash back to see how this all started, what Robinson said when his hire was announced in the middle of July.

"The coach in me says I want to be on the field, but this position was something that excited me from the moment Mack and I talked because it's a chance to help the program," said the former Texas defensive coordinator. "I can't tell you I would go to different places around the country necessarily to do this, but to help him and the Longhorns in any way is very exciting for me."

Totally not looking over the shoulder of Diaz, though. Totally not.

"I don't want to in any way inhibit him or any of the coaches," Robinson said. "Mack and I talked about that, and that was important to me. I want these coaches to know that I'm there for them and just to be helpful and provide any information I can find, to review, study and provide them data that they'll have access to."

Of course not. Robinson and Brown decided on the "right way" to do things, and it was to give Diaz a short leash and then bring back Robinson at the first sign that previous failures were recurring.

Or at least that's what happened.

Thing is, Diaz didn't actually get fired. In looking back at the language of the relief, Texas actually relieved Diaz of his duties as defensive coordinator and reassigned him to another position in the athletic department.

At least that's how the release makes it sound.

Talk about a soft landing. Maybe he's cleaning the showers with a toothbrush now as punishment. Grounded to his room for a week?

So Robinson flew in Sunday because he'll "do anything I can to help [Texas head coach Mack Brown]," though maybe that really means that he'll do anything to have a last chance at coaching the defense at one of the most prestigious programs in the country.

More: Michigan insider gives hire of Robinson an F, says it is pouring gas on a tire fire.

So what do we know about Robinson? We know that the run defense was good in 2004, as he took advantage of a lot of talent defensively and employed a bend-but-don't-break strategy that featured a lot of zone blitzes and zone defense, according to former safety/linebacker Drew Kelson, who played for Robinson that season.

Robinson and Akina were capable of teaching that particular Texas secondary, one that also featured a ton of elite talent, to effectively play zone defense, something that Akina has struggled with at times in his deference to man-to-man principles in his fiefdom, but that is at least positive.

The news from Michigan wasn't encouraging, but Robinson dealt with a deficient secondary there and didn't benefit from Rich Rod's move to a 3-3-5 and subsequent meddling, which completely ruined the 2010 season -- he at least appears to deserve some benefit of the doubt for the struggles in his final season as a college defensive coordinator. So there's that.

An affinity for zone blitzes suggests that he's ready to use some of the fire zones employed by Diaz so often, but his game-planning for BYU and overall philosophy suggests that he will be much less aggressive and more focused on fundamentals and avoiding giving up big plays.

Which Diaz didn't seem to understand. Or be able to accomplish.

The hire of Robinson seems like a Band-Aid on the gangrenous rot of Bellmont encapsulated in the continued employment of athletic director DeLoss Dodds and head coach Mack Brown and a short-term solution to an overarching problem.

Improvement by the defining date of October 12 seems mostly dependent on Diaz's incompetence. If he was, like, unbelievably incompetent? Robinson might be able to make a quick difference and slow the bleeding for a defense that supposedly has talent, but lacks physicality, an understanding of assignments and angles, and generally tends to fold at the first sign of adversity, as noted by Kansas State linebacker Tre Walker so publicly. And revealed so publicly, once again, by the BYU Cougars.

On the other hand, if Diaz wasn't really the biggest problem around, if this is all about the program and the rest of the coaching staff and Mack Brown himself, as is likely?

Well, at some point maybe we'll look back on Sunday, September 8, 2013 and the preceding night of horrors, and laugh with that deep, bitter gallows laugh.

Then again, if it comes to that, maybe we'll all just be happy that it was one of the final moments that led to end of Brown's tyranny of incompetence the longtime coach has perpetuated against the program for some time, but especially every minute he's been on the job since it all ended last October on the field at the Cotton Bowl.

For now, welcome to the hellscape that has been Texas football for three years now.

Oh yeah, y'all have been here.