The Horns offense has somehow managed the feat of simultaneously taking one step forward and two steps back.

So close and yet so far away.

For the last several weeks, the Texas Longhorns have been close to creating big plays on offense, only to have something small go wrong to negate all the other positives happen on that particularly play.

Perhaps no play better defines that struggle than the 73-yard run by sophomore quarterback Tyrone Swoopes in the first quarter against the Oklahoma Sooners.

Had it stood, the play would have flipped field position and put the ball at the Oklahoma 15 yard-line, which is probably even in the range of beleaguered Texas place-kicker Nick Rose.

Instead, the play was called back and Texas went three and out.

Here's the play and why it was both an excellent call and, for the most part, extremely well blocked.

Texas lines up in the Diamond formation, which it hasn't used extensively this season, but is a look that presents some difficulties for defenses because it doesn't announce a strong side to the formation. The location of senior tight end Geoff Swaim is something that opponents can key on because he is the strong blocker of the group with senior running Malcolm Brown on the other side of Swoopes and junior running back Johnathan Gray behind the Texas quarterback.

The play may be a classic zone read with Swoopes reading the play-side EMLOS -- the end man on the line of scrimmage. In this case, that's Oklahoma outside linebacker Geneo Grissom. The wrinkle here is that Swaim will slice across the formation and act as a lead blocker for Swoopes, an important movement because it means that defenses can't anticipate the side to which the run will go simply by where the tight end lines up. 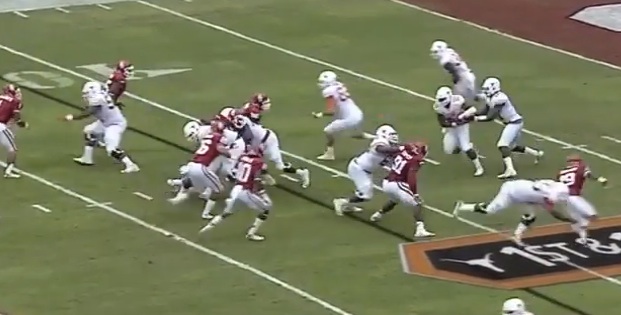 So, is the play actually a zone read? Notice that Swoopes is looking directly at Grissom here, suggesting that he is actually making a read. However, it may not be, as this could be predetermined since Gray isn't in a pitch relationship with Swoopes and instead quickly heads out as a blocker. 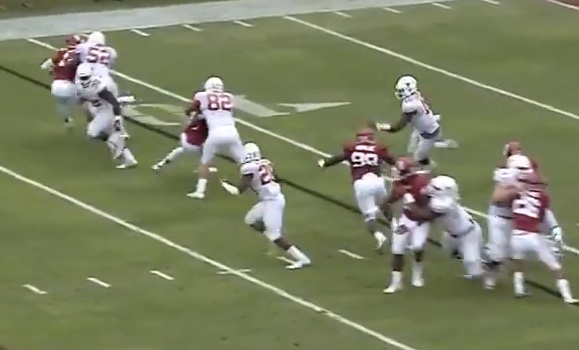 Other than Swoopes making the correct read on the crashing defensive end, the two keys to this play getting past the line of scrimmage are the blocks by redshirt freshman right tackle Darius James and Swaim.

On calls like this, Swaim can pick up the EMLOS if the quarterback makes the wrong read -- part of the reason why this could be a predetermined call for Swoopes to keep -- or keep heading on his track to pick up the first defender to present themselves.

Here he picks up the force defender while James executes an impressive block on the edge that engulfs his opponent.

Notice as well that Brown has executed his fake and now has his head around to check where Swoopes is headed and to determine his next move. And since James and Swaim have both executed their blocks, Gray is through to the second level to find a defender of his own to block.

After being optioned off, Grissom takes a quick turn to pursue Swoopes down field, but Brown sees him and executes a resounding block on the much bigger defender. Gray heads down field and ultimately executes an impressive effort of his own in knocking down another defender. 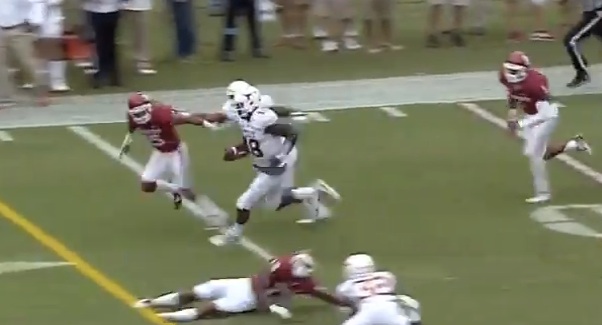 The only thing missing? A good block from senior wide receiver John Harris, who has worked hard all season to execute such blocks to spring his teammates. Effort isn't the problem here -- it's the execution. If Harris lets go of Sanchez more quickly, the flag may stay in the pocket of the linesman.

Unfortunately for the Horns and Harris, the officials catch him grabbing onto the jersey of his opponent, Oklahoma cornerback Zack Sanchez. It's no insignificant hold, either, as Sanchez is the last Sooner player with the chance to bring down Swoopes before the Texas quarterback picks up serious yardage.

Even if Harris doesn't commit an obvious penalty on this play, Swoopes picks up at least 10 yards and could have more if he breaks the tackle or drags the much smaller Sanchez while pursuit comes.

To sum it up, play caller Shawn Watson introduced a formation Texas hasn't used much and called a play from it that -- to this writer's knowledge -- hadn't been called all season. It was the right call at the right time and, including the correct read from Swoopes, five players used excellent efforts to create the potential for a big play.

The blocks by James, Swaim, Brown, and Gray all deserve commendation. And, as mentioned above, so did the effort of Harris with the exception of the jersey grab.

Last week, Brown talked about his confidence in the team because of how close the group is getting to producing the type of game-changing plays that would have turns losses against UCLA, Baylor, and Oklahoma into a possible wins.

Too true about where the team was before heading back to Dallas for a second time and, unfortunately, not quite prophetic about getting those pesky little details corrected.

So, there's still hope because the Horns are so close and yet so far away from doing the things that good football teams do on a consistent basis.