The possible changes could push DKR capacity back past Kyle Field.

Nearly a year after the reveal of the plans for the Dell Medical School that will transform the Texas campus, Longhorns athletic director Steve Patterson announced on Monday that the athletic department has begun a feasibility study with PriceWaterhouseCoopers to determine whether the school should renovate the south end zone of Darell K Royal-Texas Memorial Stadium.

Seeking a "superior gameday experience," Patterson said in a release that moving forward with the project will require approval from various entities and depend on factors he did not expand upon.

The former football coaching staff told recruits as far back as last May that stadium expansion was under consideration and the Phase 3 plans for the medical school revealed around the same time show a new south end zone at DKR that does not appear to include the Godzillatron. 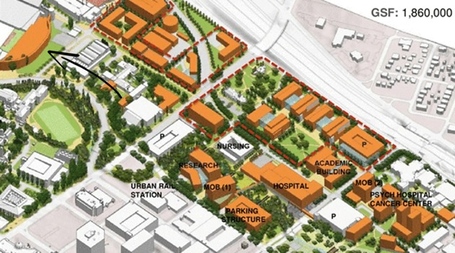 Phase 3 of plans for the Dell Medical School (UT release)

While the odds are high that the Aggies will see this as an attempt by the Longhorns to keep up with their improvements that will push the capacity at Kyle Field past that of DKR, and though the decision by Texas doesn't exist in a complete vacuum, the further expansion of DKR is probably more correctly viewed as the continued execution of a long-term plan that has been in place to some extent for some time -- after all, those bleachers in the south end zone have always had a rather unfinished feel to them and after the 2009 expansion, it seemed like only a matter of time until the south end of the stadium received the same treatment.

If Texas really wanted to increase the capacity of DKR just to pass the renovated Kyle Field, they could possibly do it just by re-working the bleachers in the current south end zone to seat 1,500 more fans (50% more than currently occupy that area).

The above image also does not appear to include the Moncrief-Neuhaus Athletics Center that currently houses the Texas football offices, locker room, weight room, meeting rooms, and academic center. Presumably, the south end zone renovations, if they are undertaken, would include new football offices to keep them on site. At the least, the renovations would have to include the locker room. Otherwise, the football offices would probably have to move across I-35, as the medical school will further squeeze the available space around the stadium, particularly to the south.

The likely impetus behind the whole move is probably related to the desire for more suites, as the south end zone currently only holds the bleachers that were permanently built under the Godzillatron in 2009 and seat 4,525 students and Longhorn band members.

The renovations to the sound end zone could also spur some alterations to the current seating policy that could include moving the band back to a spot in the stadium where the greater part of the student section can hear it and other necessary changes to improve the game day experience for students in an effort to make DKR a more hostile environment.