The continuing saga of Daje Johnson

The talented but troubled playmaker may be running out of time to prove himself to Strong and the coaching staff.

Share All sharing options for: The continuing saga of Daje Johnson

It was never an issue of talent.

In 2011, Daje Johnson was a talented two-way player at Hendrickson HS in Pflugerville, TX. Originally a TCU commit (as a cornerback, no less), Johnson began attracting countrywide attention after scoring 45 total touchdowns his senior year and posting a record SPARQ score of 146.5 at The Opening. Mack Brown proceeded to extend Johnson an offer one month before Signing Day, promising him a playmaking role in the offense. For Daje, the choice was a no-brainer - by the time NSD rolled around, he was dead-set on becoming a Longhorn. The reason was simple:

"They want me on offense... They feel like I can do a lot with the ball in my hands. They see me as a very explosive player and don't want to waste that on defense. That is why all the offensive coaches came to talk to me."

It didn't take long for Daje to impress Brown and the coaching staff at training camp. Johnson was given a hybrid RB/WR position (similar to Ramonce Taylor, another troubled but extremely talented footballer). Brown's goals for Daje were simple; get the ball in his hands, then sit back and watch the fireworks.

Johnson's first year at the 40 Acres swung wildly between extremes. When Texas needed an explosive play, Johnson was usually good for one. There were the highs:

For a starstruck freshman, academics can sometimes be tough to keep track of. And Johnson was no different.

Heading into 2013, the coaching staff had high hopes that Johnson would shake off any lingering schoolwork-related issues and become a consistent cog in the Longhorns' high-powered offense from the previous year. With Marquise Goodwin and D.J. Monroe gone, Johnson was poised to take over the slot receiver position and get many more touches.

And initially, Daje seemed to rise to the challenge.

But that didn't last long. 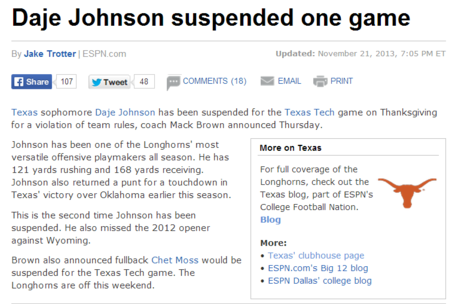 Once again, Daje had run into academic issues.

As the Longhorns head into 2014, Johnson is one of the few consistent weapons for Texas on the offensive side of the ball. His speed and athleticism allow him to break the game wide open in an instant, and his 9.6 yards-per-touch career average leads all Longhorns players. Texas' 2014 offense will need every last bit of explosiveness Daje Johnson has to offer. And this season will be extremely critical for Daje - Tavon Austin's success in the pros will weigh heavily on his mind as he attempts to excite talent spotters with another breakout season.

Unfortunately, sitting on the sideline isn't the best way to impress NFL scouts. Yet that's what Johnson will be doing come August 30th, when the Longhorns take on the Mean Green for the first game of the season. Of course, it started the same way it always had - in February, as spring camp was starting up, Johnson was among a group of players who were pulled aside by Charlie Strong. The message was simple; I've got my eye on you. Break the rules, and there will be consequences.

Brown's goals for Daje were simple; get the ball in his hands, then sit back and watch the fireworks.

Six months later, the hammer dropped; Texas announced that Johnson would be suspended for at least one game, along with two other potential starters. Ironically, this was good news - many had speculated that Johnson would be dismissed from the program, along with fellow running back Joe Bergeron. At a Thursday press conference, Strong noted that he didn't know how long Johnson and the other suspended players would be out for. When asked whether the junior had 'figured things out', Strong's reply was short, sweet, and discouraging:

Is Strong being unfairly unsympathetic? Hardly, although at this point he has every right to be. In fact, he seems as eager as anybody to get Johnson back on the field. Strong has raved about Daje's exceptional talents in the past, and Thursday was no different.

"He's a special player. He's so explosive with the ball. He can get the ball in his hands and he's one of those guys who can make people miss and break away at any time."

So that's the bad news. The good news? Thanks to Strong, Daje is closer than he's ever been to resolving his academic issues. Day by day, Johnson has been inching himself closer to the exit of Strong's doghouse - that much has been clear. In fact, the lack of recent news regarding Johnson has been encouraging - many had speculated that Johnson would end up as attrition fodder sooner or later. The upcoming season could make or break Johnson's future as a Texas Longhorn - and no one is more acutely aware of this than Coach Strong.

"You never walk into a situation where you're looking for issues and you're trying to get rid of guys... It's more about developing players. But when you set rules and say this is the way things are going to be done and then guys continuously challenge you on those policies, then something has to be done. If you talk enough and you do nothing about it, then other players are going to eventually say, ‘Hey, why is he even standing there saying it? He's not going to do anything about it."

Translation: Figure it out, Daje. Texas is counting on you.