The results of our reader survey are in. BON readers predict that Texas will win between 8-9 games prior to the start of bowl season.

Last week, we asked you to predict the outcome of each Texas football game. Here is how the survey worked:

In the survey, I am asking you to go through the Texas football schedule game by game, and forecast the outcome of each. Rather than asking you if you think Texas will win or lose each game, I am asking for you to assign a probability of a Texas win or loss from a selection of a few choices. That way, if you are pretty confident in a particular result, you can select a higher probability, and if you are less certain, you can waffle a bit.

Users were only asked about the outcome of regular season games. I didn't ask about a bowl game outcome, because we have no idea who Texas' opponent will be.

Over 600 of you responded to our survey. Respondents predicted on average that Texas will win between eight and nine games this season (the calculated average was 8.1 wins, however for methodological reasons I prefer to not be this precise). Eight to nine wins was also not only the average, but the most frequent individual response. The spread of individual predictions is shown below. 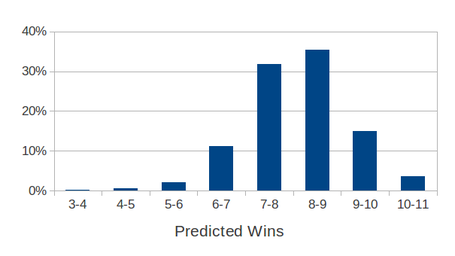 The four most optimistic readers predicted that Texas would win 10.8 games. This is the maximum value that the survey allowed you to predict (giving Texas a 90% chance to win every game). I am sure these readers would have predicted 12 wins if the survey would have allowed them to.

The most pessimistic four readers predicted that Texas would win less than five games, with a single reader predicting fewer than four total wins. 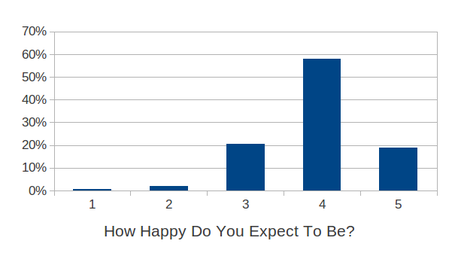 Not surprisingly, there was some correlation (although it is relatively weak) between how many wins a respondent predicted, and how happy the respondent expected to be.

Finally, here are the game by game results of the survey. For several of the games, a high percentage of respondents picked a 90% winning percentage. This suggests that if provided with a higher percentage to select, these respondents would have chosen it. Thus, the probabilities below very likely underestimate reader predictions for several games.